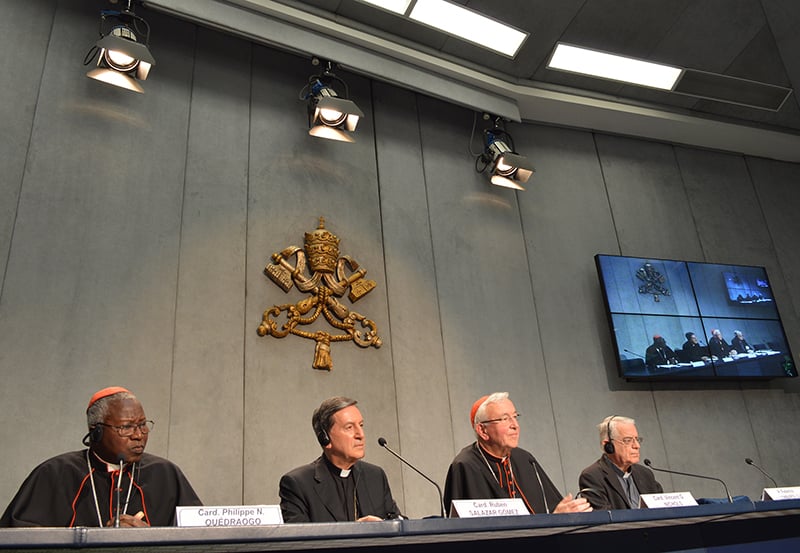 VATICAN CITY (RNS) At the midway point of an intense three-week Vatican summit to debate church teachings and the modern family, Catholic bishops from around the world are finding some common ground while still airing stark disagreements.

And, increasingly, they may be looking to Pope Francis to rescue the process by publishing a statement that would settle any irreconcilable differences.

“My hope, certainly, is that the pope will reflect and issue a magisterial document” after the end of the meeting, British Cardinal Vincent Nichols told a press conference on Wednesday (Oct. 14).

“That request is beginning to come through, I think, in the debates,” Nichols said.

The intensity of those debates may be a reason that the 270 bishops at the meeting, called a synod, are looking to Francis.

This gathering is a follow-up to a similar meeting Francis convened last October. The aim was to foster dialogue in the church, in general, and specifically to allow the global hierarchy to discuss how — or whether — the Catholic Church can adapt its teachings and language to the realities of modern families, marked by divorce in many countries and polygamous marriages in other regions.

The bishops and cardinals, who meet most days in a Vatican lecture hall presided over by the pope, are also struggling to find ways to be more inclusive and welcoming to cohabiting couples and gays and lesbians.

But even before the synod convened on Oct. 4, sharp differences emerged between bishops from different continents, and between those who saw any softening of language toward gays — not to mention any suggestion of adapting church practices on receiving Communion — as tantamount to heresy.

For example, in one particularly eye-opening speech to the assembly last week, a leading African cardinal blasted the “idolatry of Western freedom” as equivalent to “Islamic fundamentalism” and compared both to “apocalyptic beasts.”

Cardinal Robert Sarah of Guinea, a top official in the Roman Curia, also said that divorce, abortion and same-sex marriage in the West, and Islamic fundamentalism in Africa and elsewhere, both had a “demonic origin” that the synod had to combat.

“What Nazi-fascism and communism were in the 20th century, Western homosexual and abortion ideologies and Islamic fanaticism are today,” Sarah said.

Beyond those differences, there have also been charges of back-room manipulations and secret pacts to ensure that the synod reaches one conclusion or another.

READ: Catholics love their celebrity pope and most — not all — of his priorities

The most embarrassing episode so far was the publication of a secret letter to Francis signed by 13 conservative cardinals — including Sarah, as well as New York Cardinal Timothy Dolan — who complained that the pontiff had set up the synod to favor the reformers.

The letter touched off a frenzy of media speculation as details emerged and various cardinals sought to distance themselves from the maneuver. It also appeared to prompt a backlash against the signers by the rest of the bishops in the synod hall, where sessions are closed to outsiders.

If there was resentment, and some eye-rolling, among the other cardinals and bishops, Nichols said they continued to make progress working in 13 small groups divided up by language.

Interim reports by each of those groups were released Wednesday at the press conference. The reports showed persistent differences, as some bishops sought to emphasize a merciful approach to the flock while others stressed the importance of justice and moral clarity.

There did appear to be some narrowing of differences in recent days, however, and even some convergences.

Speaking at the press conference with Nichols, Cardinal Philippe Ouedraogo of Burkina Faso compared the question of allowing Communion to divorced and remarried Catholics — a problem highlighted by Western bishops — to the challenge of polygamy in many African societies.

“The church has a big, large open door wherever everyone can go and enter with all their problems,” Ouedraogo said. “This is absolutely fundamental.”

Still, the bishops are only now beginning to debate concrete solutions to some of the most vexing questions, and that could change the tenor of the synod as it enters the home stretch — a finale that may end without a firm conclusion.

“My own instinct is that the Holy Father has asked us and encouraged us to speak very freely” because the pope “is very clear about his own role,” Nichols said.

And part of that role, he said, will be to make a “definitive statement” that settles what are likely to be outstanding issues. It’s not known whether the pope will do that, or how long after the synod ends he would make his views known.

“My hope, certainly, is that he will complete this process, because it seems to me that it will need to brought to a conclusion, and there’s only one person who can do that.”