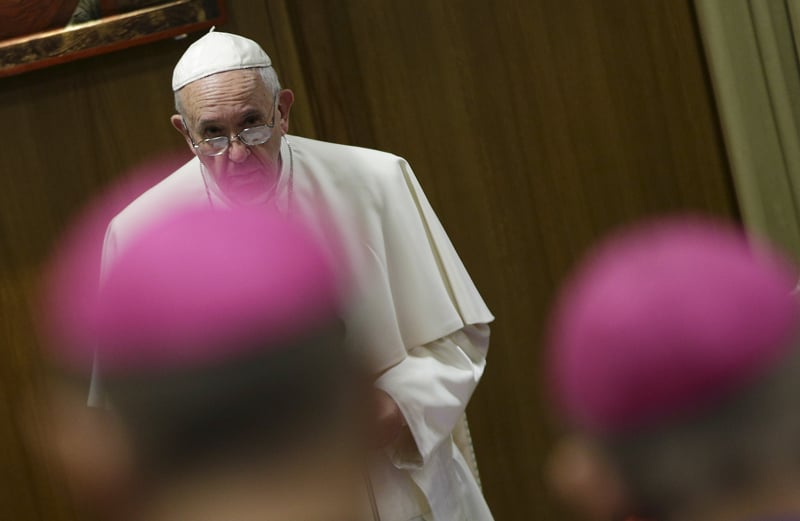 Pope Francis leads the Synod of Bishops on the family at the Vatican on Oct. 5, 2015. Photo courtesy of REUTERS/Max Rossi
*Editors: This photo may only be republished with RNS-SYNOD-DISCUSSION, originally transmitted on Oct. 6, 2015.

VATICAN CITY (RNS) Bishops participating in the Vatican’s synod on the family have admitted that they don’t know much about sex — and that they need the help of laypeople to fully understand marital intimacy.

Laypeople play an important part in the discussions at their synod on the family, the Rev. Thomas Rosica, English-language assistant to the Vatican press office, said on Friday (Oct. 16).

“At the heart of the synod is human sexuality. And oftentimes it’s muted and we don’t know how to talk about it, because most of us in the room are male celibates,” he said, citing comments of unnamed bishops.

Fourteen married couples and other laypeople have been brought in to fill in the gaps in the churchmen’s knowledge, advising the 270 bishops as they discuss family issues.

The Rev. Federico Lombardi, the Vatican’s chief spokesman, cited bishops who said it is essential to grasp “the importance of sexuality in spouses’ lives.”

But the Rev. Manuel Dorantes, assisting the Vatican press office in Spanish, said bishops also discussed the need for families to change the way they talk about sex.

“Many fathers don’t talk about the beauty of sexuality with their children. The church itself is not entering into this role; they should present the good news of human sexuality as a pathway of love, not sin,” he said.

Quoting an unnamed synod bishop, Rosica noted the sacramental nature of both the Eucharist and marriage. “‘This is my body, given for you.’ We need to root that in human sexuality and in love. It helps to appreciate even better the sacrament of the Eucharist,” he said.

The bishops have some way to go if they are to convince Catholics they understand their lives, according to Sharron Cole, president of Parents Centres New Zealand, who has been participating in the discussions.

Until now the Catholic Church has responded to married couples’ use of artificial contraception, for example, by either ignoring it or calling for greater religious instruction, Cole told bishops. “This ‘paralyzed status quo’ cannot continue. The matter must be discussed afresh, but laypeople will not be content to leave it to clergy alone.”

Cole said clergy’s response to the sexual abuse scandal demonstrated a lack of “expertise in sexuality and psychology to make good decisions,” leading to further harm and a loss of credibility.

“The time is now for this synod to propose that the church re-examine its teaching on marriage and sexuality, and its understanding of responsible parenthood, in a dialogue of laity and bishops together,” she said.

News
Leaving Canada, Pope Francis said it might be time to slow down as health declines