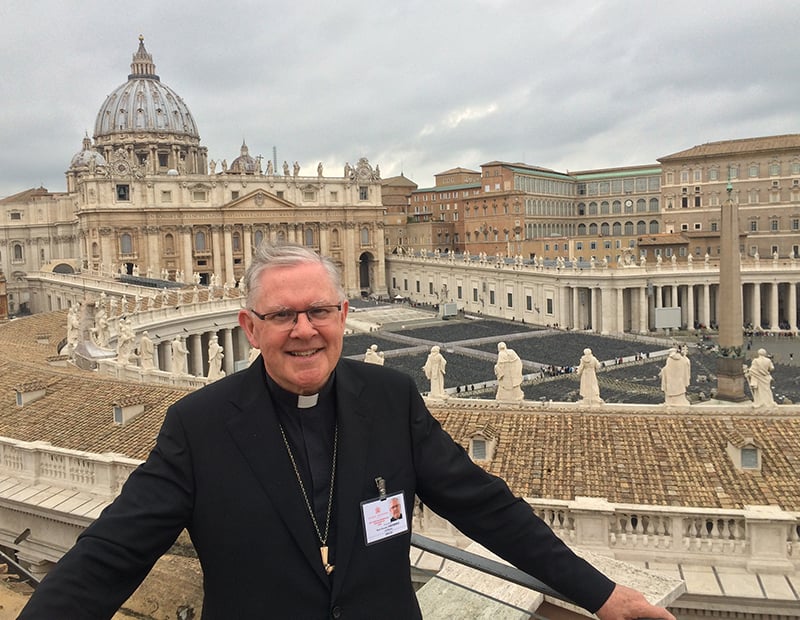 Australian Archbishop Mark Coleridge, the 67-year-old head of the Archdiocese of Brisbane, has been writing his online diary nearly every day since he left for Rome on Oct. 1, offering witty, chatty postings that provide equal helpings of dish and doctrine. Religion News Service photo by David Gibson

VATICAN CITY (RNS) Barrels of ink, digital and real, have been spilled by journalists trying to convey the gravity of the high-stakes debate on church teaching in Rome this month, as the melodrama that a closed-door Vatican gathering of some 270 churchmen almost guarantees.

The synod, as it’s called, has it all:  steady leaks to the press, rumors of lavish dinners and reports of intense lobbying, plus open disagreements over doctrine. It’s a steady diet of soap opera and theology, and almost too much for any reporter to keep up with.

Which is why, if you want to know what it’s like to be a player in such an event, and in the extracurricular socializing where much of the work is done, you have to read the blog of Australian Archbishop Mark Coleridge.

The 67-year-old head of the Archdiocese of Brisbane has been writing his online diary nearly every day since he left for Rome on Oct. 1, offering witty, chatty postings that provide equal helpings of dish and doctrine. It’s made him something of an Internet sensation back home and the media star of the Anglophone world at the Vatican.

“Because more people are reading you there’s more chance for things to go wrong, so I’m starting to think twice before I write,” Coleridge said in an interview.

Thankfully, that caution hasn’t yet diluted his entertaining prose.

Want to know what the pope is like up close? Francis doesn’t have the “instinctive courtliness” of Pope John Paul II or Pope Emeritus Benedict XVI, Coleridge writes: “He’s more instinctively one of the mob.”

But what about all those eminences and excellencies he gets to hang out with?

Generally a good bunch, sure, though one cardinal in their small group noticeably went AWOL one day when the grunt work began.

The blogging bishop of Brisbane could hardly blame the cardinal, though. The small group meeting rooms are cramped and sometimes airless, he writes, “definitely economy rather than business class. Keep the elbows down.”

On one particular day, Coleridge confessed, his patience was repeatedly tested by a bishop sitting behind him who was alternately “snoring and chattering” through the addresses. “But the real challenge came when his cellphone rang not once but twice during the speeches,” he wrote. “Even my neighbor, the mild-mannered and courteous Archbishop of Marseilles, gave him the glare.”

It’s important work, yes, but the climate is a tad stifling. He recalls the “cry of jubilation” from the synod delegates when they were unexpectedly given a 10-minute break in discussions, and the boos when told there would be no coffee. Nor, as another bishop lamented, any booze to make the discussions a bit livelier.

And he’s brilliant at highlighting the little-noted contrast between the grandeur of the Vatican’s architecture and the state of its office equipment. “Seriously antiquated,” he grumped in a post recounting his travails at trying to edit his group’s report on deadline and then print it out in a rush:

“Everything about them is wrong — computers (some don’t work), printers (ditto), height of keyboard (made for giraffes), lowness of chair etc etc. This makes a tough job even tougher,” he quipped.

So who is “Mark of Brisbane,” as he calls his blogging self?

READ: Clash of the archbishops: Synod dispute between US senior churchmen goes public

He’s probably the perfect person for this task, a man who is in this world but not of it: a scripture scholar by training, Coleridge worked for several years in the Vatican’s Secretariat of State, the nerve center of the Roman Curia, before returning to Australia. So he knows Italian — the lingua franca of the 108-acre city-state — and he knows how things work here, or don’t.

He can catalog the small vices of the “ecclesiastical village” around the Vatican while appreciating its undeniable virtues, and he can brush off as inconveniences the sort of perks most any other Catholic would endure millennia purgatory for.

Stay in the Vatican guesthouse where the pope lives? “I’d prefer something a little less fraught,” he writes. So he’s lodged across the street in a simple religious hostel “which also has the added boon of a lovely terrace on top of the building overlooking St Peter’s Square — just the place for a relaxing night-cap after a hard day at the Synod.”

Sure, you may find it hard to forgive him for enjoying too well his glass of Greco di Tufo wine, or his lament for the “Roman eatathon” that paces social interactions here (and church business).

But envy aside, all his anecdotes are really invitations into deeper musings on the serious issues under discussion at the synod, and the angst it’s all producing among the bishops.

Coleridge himself is a moderate, savvy churchman (a “player” in ecclesiastical politics, they call him back home) who has staked out a clear middle ground in an assembly that seems to have none: While maintaining that doctrine is inviolate, he has increasingly argued that there is “space for all kinds of pastoral creativity” to accommodate the divorced and remarried, for example, and a need for new and more inclusive language to talk about gay people.

He also has little time for all the plotting and backstage shenanigans that have gone on, deriding the “psychodrama” surrounding a notorious secret letter to the pope from 13 cardinals and blasting the “paranoia” that grows from the fear of changing “the smallest jot or tittle of what we have long said and done.”

With typical verve, he tells his panicky colleagues that “red-eyed joylessness cannot be of God” and writes that if he thought they were about to bring the edifice of Catholicism down, “I’d be panicking too and hurling lemon-lipped diatribes this way and that.”

Stating things so baldly has its purposes, as does telling synod tales. As he writes: “To demystify is not to diminish. The only thing that diminishes a Synod is the drive to turn it into a political caucus where power is what really matters.”

Coleridge is determined to send his own message of inclusion by taking his readers into the synod with him “because they’re part of the synod as much as I am.”

“Because what I’ve discovered is that these synods are far more fascinating to be part of than they are to read about from afar,” he said. “They can seem like these great big groaning institutional events that achieve very little. But in fact there’s a whole human dynamic and human story when you’re part of it. Rich personalities, all that’s good, and perhaps less good, in the Roman Catholic Church.”

And in the end, against all odds, it does become “a deeply spiritual event.”

Alas, the blogging bug seems destined to last only as long as the synod, which concludes Sunday (Oct. 25). He only started it because communications officials back home asked him to, and he has found it comes fairly easily, though he’s never kept so much as a diary before. Part of that is because there’s so much material at hand: “Rome invented cloak and dagger. So you’ve got heaps of stuff to write.”

It won’t be the same after Sunday. “Once I’m back as archbishop in Brisbane the rhythms of life are very different. I’d be almost certain I shall retire to the silence from which I came.”

The debates, of course, will go on, inside the Vatican and across the Catholic blogosphere. But they won’t be nearly as enlightening, or downright entertaining, without Mark of Brisbane weighing in.