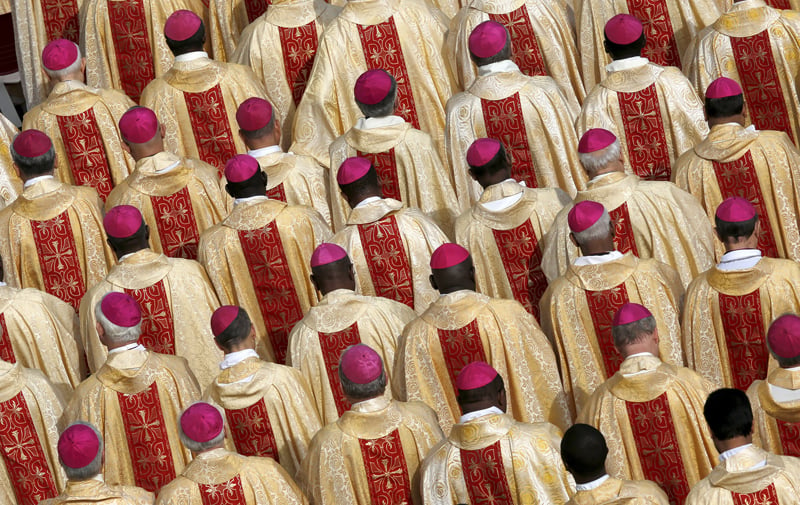 Bishops are seen in attendance as Pope Francis leads the mass for a canonization in Saint Peter’s Square at the Vatican on October 18, 2015. Photo courtesy of REUTERS/Alessandro Bianchi *Editors: This photo may only be republished with RNS-AMERICANS-SYNOD, originally transmitted on Oct. 19, 2015.

ROME (RNS) The eight American bishops taking part in a Vatican summit on family life stay at a huge seminary built high on a hill overlooking St. Peter’s Basilica and the rest of the Eternal City.

It’s a lovely place with spacious apartments for each bishop and any amenity they might need.

But for all that, it may be getting a tad uncomfortable.

In the latest installment of an increasingly sharp exchange conducted via the media, Philadelphia Archbishop Charles Chaput on Monday (Oct. 19) rejected what he took as a swipe at him by Washington Cardinal Donald Wuerl, also a member of the U.S. delegation at this gathering of global bishops.

Chaput, who hosted Francis for the final two days of the papal visit to the U.S. last month, didn’t like what he saw as Wuerl’s attempt to lump him in with the conservative opposition to the pope at the gathering, called a synod. 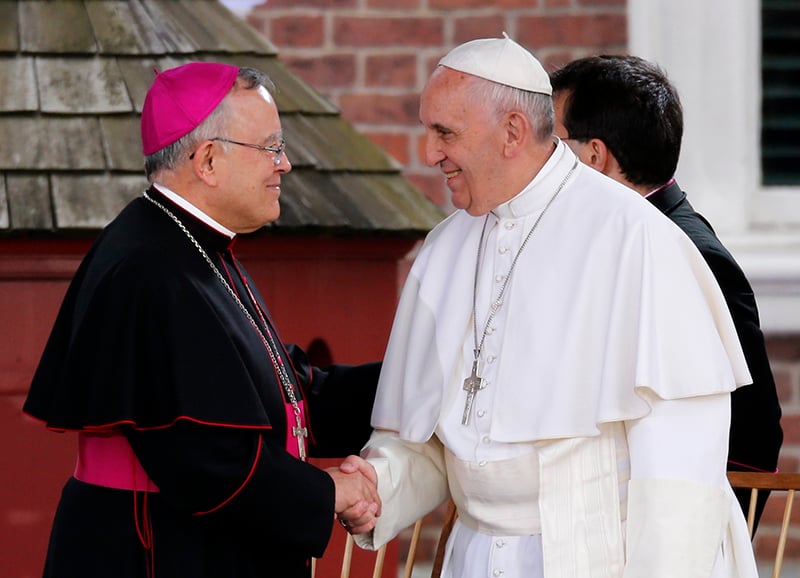 Pope Francis shakes hands with Archbishop Charles Chaput as he arrives on the Independence Mall to deliver remarks on the theme “We Hold These Truths,” a quote from the Declaration of Independence, in front of Independence Hall in Philadelphia, on September 26 2015. Photo courtesy of REUTERS/Jonathan Ernst *Editors: This photo may only be republished with RNS-CHAPUT-SYNOD, originally transmitted on Oct. 7, 2015, and with RNS-AMERICANS-SYNOD, originally transmitted on Oct. 19, 2015.Chaput, a leader of the conservative wing of the U.S. hierarchy, has been viewed as out of sync with Francis’ new approach to ministry and has been a regular critic of the synod process and working documents — both of which Pope Francis went out of his way to endorse and defend at this meeting.

The Philadelphia archbishop has been a regular critic of the synod process that Francis set out, and of those at the synod who want to explore reforms to church practices so that, for example, divorced Catholics who remarry without an annulment could receive communion.

The reformers would like the church to find ways to be more welcoming to gay Catholics, among other things.

In a Wall Street Journal column last Friday, Chaput struck again, knocking the synod’s methods — which have been backed by Francis — but also taking a dig at the motives of the reformers.

In the article, Chaput said the more the champions of reform insist they are not changing church doctrine on marriage, the less believable they are to the other cardinals and bishops at the synod.

That jab came on top of the ongoing furor over a secret letter that 13 conservative cardinals sent to Francis just after this synod began earlier this month in which they blasted the process and argued that it was rigged to favor reforms that would lead the Catholic Church down the road to heresy and ruin.

One of their chief complaints was the composition of the 10-member committee drafting the final report; that committee, which the conservatives said was too progressive, includes Wuerl, who was personally named by Francis. 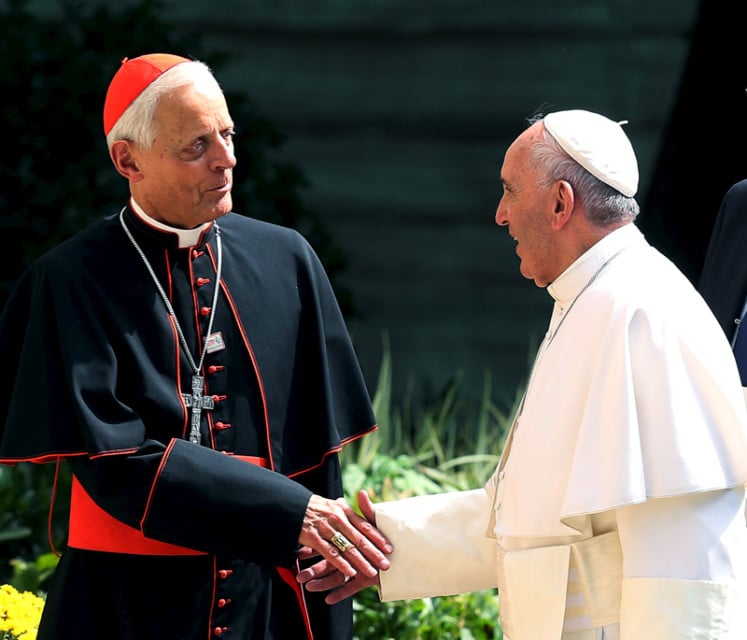 Pope Francis greets the Archbishop of Washington, Cardinal Donald Wuerl, upon returning to the Vatican Embassy in Washington on day three of his first visit to the United States on September 24, 2015. Photo courtesy of REUTERS/Gary Cameron
*Editors: This photo may only be republished with RNS-AMERICANS-SYNOD, originally transmitted on Oct. 19, 2015.

In an unusual breach of ecclesiastical etiquette, two of the signers of the letter were Wuerl’s fellow Americans, New York Cardinal Timothy Dolan and Galveston-Houston Cardinal Daniel DiNardo.

Apparently, it was all a bit much for Wuerl — normally one of the most cautious and diplomatic of churchmen — and on Sunday (Oct. 18) he fired back at the critics in separate interviews with three publications.

While he didn’t mention Chaput or the others by name, Wuerl fiercely defended the synod and Francis against charges that reformers were “manipulating” the synod.

He noted that Francis had actually broadened the committee charged with writing the final report, which will be debated later this week, and he said Francis is not changing doctrine but trying to get the church to better reflect Jesus’ teachings.

“I wonder if some of these people who are speaking, sometimes surreptitiously, sometimes half-way implying, then backing off and then twisting around, I wonder if it is really that they find they just don’t like this pope,” Wuerl told America magazine, a Jesuit-run weekly. “I wonder if that isn’t part of it.”

The cardinal went on to rip those who continued to argue that the synod is being “rigged” and said their accusations had “tainted” the public’s view of the process.

Asked what he would say to those bishops who said and did such things, Wuerl replied:

“There’s not much you can say because if someone isn’t willing to hear you . . . ”

He added that he saw no evidence that synod leaders are perverting the will of the bishops or changing the teaching of the church: “I just don’t see it.”

Chaput, speaking to Catholic News Agency, insisted he was only speaking frankly when he made his criticisms, just as Francis had asked the 270 churchmen at the synod to do.

“I believe he (the pope) means what he says,” Chaput said.

“It would be very strange for any bishop to doubt that; or for anyone to discourage or mischaracterize an honest difference of views among the synod fathers. That’s especially true as it applies to cardinals. One of their main jobs is to offer their best counsel to the Pope. So I suppose you need to ask America’s editors why they ran their story. The reason escapes me.”

The contretemps follows comments last Friday by Chicago Archbishop Blase Cupich, a synod delegate who is viewed as an ally of Wuerl and Francis, who said he didn’t see any reason for the “anxiety” that Chaput claimed was dominating the synod.

The verbal volleying comes as the synod enters its final stretch, with everyone speculating, but few actually confident, about what the bishops will produce at the end of the week, or whether Francis will push reforms forward or punt.

It has contributed to an atmosphere of melodrama — or maybe it’s all much ado about nothing?

In another interview on Monday, Cardinal DiNardo, a signer of the infamous letter, played down the contentiousness of the debate.

“Some people are making out that internal to the synod there are all kinds of horrible things going on, but there really aren’t,” he told the Catholic news site Crux. “People who have just said something opposed to one another then hang out over the coffee breaks together.”