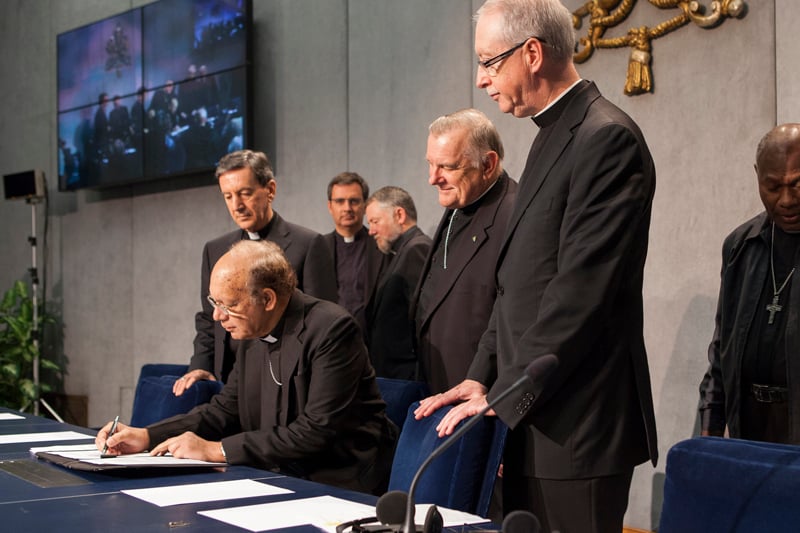 VATICAN CITY (RNS) Catholic leaders made a rare appeal to the world’s politicians on Monday (Oct. 26), urging them to take strong action at the highly-anticipated U.N. climate change summit later this year.

Nine cardinals, patriarchs and bishops representing the Catholic Church across five continents signed a document, presented at the Vatican on Monday (Oct. 26) by clergy from Belgium, Colombia, India and Papua New Guinea.

The U.N. conference on climate change meets in Paris from Nov. 30 to Dec. 11, and the Catholic leaders would like to see it take action on all 10 items.

The Catholic Church’s push for climate change action follows the release in June of Pope Francis’ encyclical on the environment, in which he took a tough line against world leaders for their inaction thus far.

The churchmen asked delegates to the conference to “strongly limit” global temperature increase and set a goal for complete de-carbonization by mid-century.

They also pushed for “climate compatible” lifestyles and said the people most vulnerable to the impacts of global warming must be included in the decision-making process.

Cardinal Oswald Gracias of Mumbai, India said at a news conference that the 10 points marked a “historic occasion” that expressed the urgency posed by climate change.

“The Holy Father has expressed the anxiety of us all,” Gracias said.

Gracias blamed past failures to reach an adequate climate change agreement on the attitude of governments, which he said think only of their relatively short terms in office rather than the years thereafter.

Gracias said it would be up to governments to present their specific commitments, while the signatories of the appeal chose to leave the precise science “to the experts.”