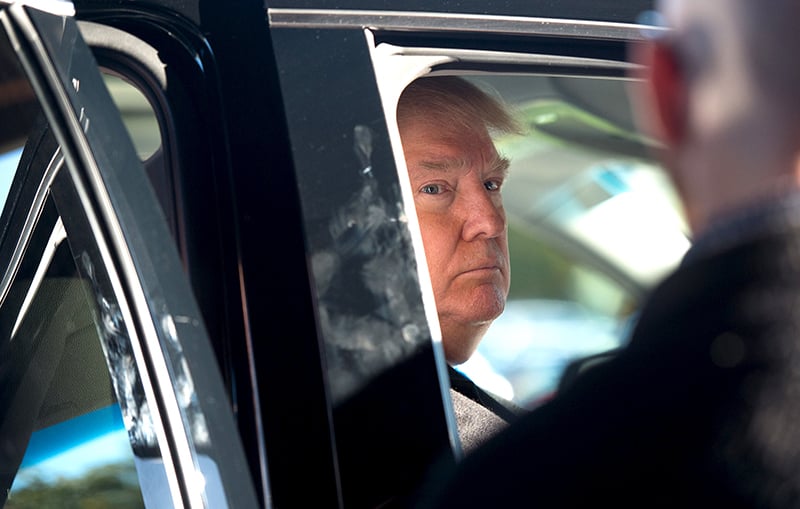 U.S. Republican presidential candidate Donald Trump peers from his vehicle after a campaign event in Atkinson, N.H., on Monday (Oct. 26, 2015). Photo courtesy of REUTERS/Gretchen Ertl
*Editors: This photo may only be republished with RNS-CARSON-FAITH, originally transmitted on Oct. 27, 2015.

"It will fail miserably," said Mike Demastus, a pastor at Fort Des Moines Church of Christ. "For Donald Trump, as a name-only Presbyterian, to be criticizing somebody else for their faith statements is laughable. This is a guy who can't even quote a Bible scripture to someone."

Several influential Christian conservative leaders in Iowa, even those who publicly back GOP candidates other than Carson, came to the defense of the Seventh-day Adventist Church on Monday.

Trump touched off the controversy when he said at a campaign rally in Florida on Saturday: "I love Iowa. And, look, I don't have to say it, I'm Presbyterian. ... Boy, that's down the middle of the road, folks, in all fairness. I mean, Seventh-day Adventist, I don't know about. I just don't know about."

Trump didn't name Carson, then he denied in an interview on ABC's This Week on Sunday that he was trying to plant seeds of doubt about his chief rival, who's now the front-runner in Iowa, polls show. But Republican caucusgoers say they got the message.

"He cast questions about Carson," said Andrea VanBeek, a 63-year-old Orange City Republican who intends to caucus for former Florida Gov. Jeb Bush. "In some ways, he's pretty smart in the way he says things without saying them, you know."

Republican presidential candidate Dr. Ben Carson appears on Fox Business Network's "Varney & Co." in New York on Aug. 12, 2015. Photo courtesy of REUTERS/Brendan McDermid
*Editors: This photo may only be republished with RNS-GRIFFIN-COLUMN, originally transmitted on Sept. 23, 2015, or with RNS-CARSON-FAITH, originally transmitted on Oct. 27, 2015.

READ: Ben Carson’s faith (and mine) has already touched your life (COMMENTARY)

The Des Moines Register, in an article published Saturday about the 100 days until the Iowa caucuses, had noted that some conservatives have argued Seventh-day Adventists aren't Christians.

Trump's support in Iowa has plunged, although he remains securely in second place, according to a Register/Bloomberg Politics Iowa Poll and three other recent Iowa surveys.

"He's falling behind in the polls. He's got to do something," said Jeremiah Smart, the pastor of the Des Moines-area Seventh-day Adventist Church. "He's got to reach out and try to undermine Carson if he can."

READ: Ben Carson, will you tour the Holocaust Museum with me?

Smart said that's his personal view. The church doesn't endorse political candidates — or speak on behalf of Carson, he said. But the church is very focused on religious liberty, Smart said.

"Personally, I think we should look at each candidate individually in regards to their character and their positions on the issues rather than trying to bring up their religious background as a test," he said.

The views of self-described "born again" or evangelical Christians about Carson's faith could be important to the Republican caucus race because of the large bloc of likely caucusgoers who identify themselves that way — 42% in the most recent Iowa Poll. Support by evangelical voters helped propel Mike Huckabee to victory in the Iowa GOP caucuses in 2008 and Rick Santorum in 2012.

Several Iowa Republicans told the Register Monday they are skeptical of the Seventh-day Adventist Church, but Carson's affiliation with the church isn't a reason to disqualify him for the White House.

"I do see Seventh-day as a cult, and I see it as outside of Christian orthodoxy," said Dave Garlich, a 42-year-old Winterset Republican who works as an underwriter.

However, Garlich said, there's a strong Seventh-day Adventist church in Winterset, and its members are good people who are earnest in their beliefs. He said he appreciates Carson's political views, and Carson's religion has nothing to do with why he doesn't intend to caucus for him on Feb. 1. Garlich just thinks Texas U.S. Sen. Ted Cruz is the better candidate.

"Even though (Cruz) is in Washington, I see him as combating the establishment thinking," Garlich said.

"I just feel that — how can I say it. All these religions are good, and none of us know which one is right, but I think Sunday is the day of the Sabbath created by the Lord, not Saturday," said Nuechterlein, who described herself as the first woman to work on a 17-man team at an Iowa electric company decades ago.

Nuechterlein also has qualms about Adventists who believe in the writings of evangelist Ellen White as much as they believe in biblical scripture.

"They're entitled to believe what they believe, and that's what makes America great," she said. But Carson would be better in a top job in the medical field, she said.

Nuechterlein intends to caucus for Trump, not because of Carson's religion, but because she doesn't think he's "tough enough" to deal with recalcitrant foreign nations.

"Ben Carson, not unlike Donald Trump, is a progressive, who happens to be registered as a Republican," he said.

But Seventh-day Adventist Christians are "honorable people doing their best to follow convictions they take from the explicit teachings of the Bible," Gordon said.

Demastus, in a separate interview, agreed, saying Seventh-day Adventists "are not outside Christian orthodoxy at all." They believe wholeheartedly in Jesus Christ and his sacrifice on the cross, he said.

"It's not like Mitt Romney and Mormonism. That's an entirely different issue for Christians in the state of Iowa," Demastus said. "Mormonism takes a completely different view of Jesus — they have other scriptures."

Demastus, a firm Cruz backer, said his criticism of Carson centers on his view of "waffling" by Carson on opposition to same-sex marriage and all abortions.

State Sen. Dennis Guth, R-Klemme, said Trump's broadside against Carson won't work because he isn't considered an authority on the Seventh-day Adventist faith, or any religion.

"It would be different if it came from some of the other more traditional candidates who live out a Christian faith in a more obvious way than Donald Trump does," Guth said. "But coming from Donald Trump, I don't think it's going to be effective."

Gary Miller, who has assisted with pastors policy briefings for the American Renewal Project, an effort to engage conservative ministers in politics, said there are likely some Iowa caucusgoers in conservative circles, and certainly more rigid fundamental circles, who have questions about Carson's religion.

"That's just something I know is going to have to be addressed," Miller said. "I think if Dr. Carson can just clearly express what his faith is built upon, in his own words, I think that would be the clarification that the people of Iowa need."

Carson was in preparation sessions for Wednesday's GOP debate in Colorado and unavailable for an interview with the Register, aides said.

Communications Director Doug Watts told the Register the Carson campaign expected Trump would react to a negative change in the polls.

"We are not surprised or offended at his remarks," Watts said. "There is still a long way to go before votes are cast, and we are focused on maintaining and building on our lead. Hopefully, we can."