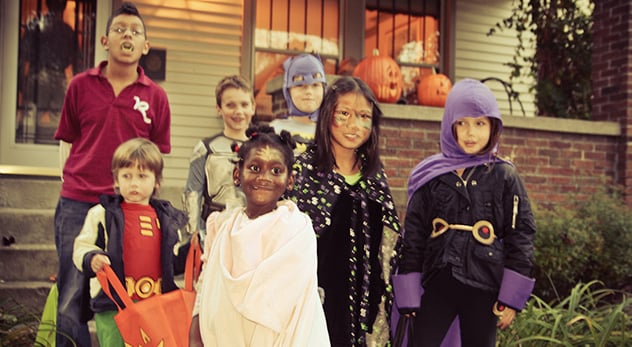 Fewer than a quarter of Americans, including Christians, avoid Halloween due to its pagan roots. (Image courtesy: http://bit.ly/1PSHqFE)

Many believe Halloween originated as a Celtic pagan festival when the souls of the dead roamed their old homes and evil spirits played tricks on the living. But most Americans, including Christians, now see Halloween as a harmless holiday for kids to play dress-up and consume candy by the fistful.

According to a survey by LifeWay Research, 59 percent of Americans think the dark day is “all in good fun.” An additional 14 percent will celebrate but “try to avoid the pagan elements.” Christians’ perspectives aren’t that much different than the non-religious, with 54 percent saying Halloween is “all in good fun.” But this doesn’t mean that every American is on board with the spooky traditions of October 31.

When they consider the holiday’s pagan roots, only 21 percent of Americans and 23 percent of Christians “try to avoid Halloween completely.”

“As popular and pervasive as Halloween has become, there is still a sizeable minority that avoids at least some elements,” says Scott McConnell, vice president of Nashville-based LifeWay Research.

For some sects of conservative Christianity, this survey may show a shift in attitudes. 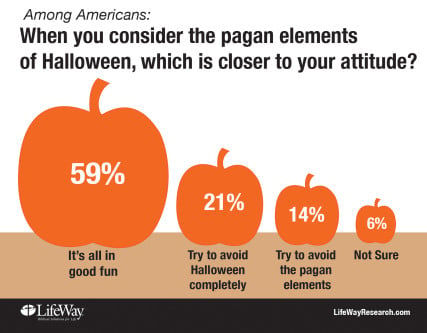 The idea was that Halloween’s pagan roots were irredeemable, and since Christians couldn’t be convinced to miss out on all the fun their less religious neighbors were having, they made knock-off versions instead. Many of these attitudes remain until today. An article on the Christian Broadcasting Network, founded by televangelist Pat Robertson, website encourages the faithful to “unabashedly and boldly create an alternative [to Halloween] that is positive and uplifting.” Today’s Christian Woman, a publication affiliated with Christianity Today magazine, suggests “5 Fun Halloween Alternatives” including, “mystery bowling” and a “pumpkin party.”

READ: “How to have a Christian Halloween”

But a rose by any other name is still a rose. And many Christians began recognizing that a Halloween party or haunted house with a Christian veneer was exactly that. So attitudes about the holiday have changed among conservatives during the last decade or more.

Russell Moore, now the president of the Ethics and Religious Liberty Commission, wrote that judgment houses “miss the mark” in 2008. Rather than serve Christian communities, Moore said, they often rob the faithful from opportunities to build relationships with their neighbors. Last year, Christian activist and former “Growing Pains” star Kirk Cameron said “Christians should have the biggest party on the block at Halloween.” He encouraged believers to discover the holiday’s ties to “All Saints Day” instead.

The faithful need more bridges, not barriers, with the rest of the world and Halloween is only as sinister as one makes it. I don’t know who spends Halloween conjuring up evil spirits or sacrificing goats to Beelzebub, and I bet most people don’t either. The holiday’s history does have pagan roots–like Christmas and Easter, by the way–but those elements have largely been replaced by candy corn and kids, pumpkins and parties.