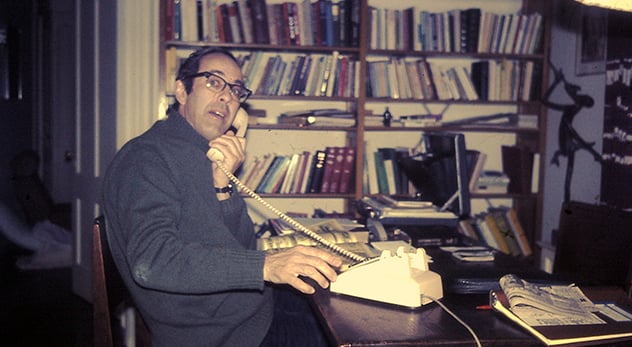 The Catholic writer’s books have sold more than 7 million copies worldwide. Here’s what fans can expect when his unpublished letters and partial manuscripts are released starting next year? (Image of Henri Nouwen at his New Haven apartment circa 1981 courtesy of Jim Forest – http://bit.ly/1GNrW31)

(New York) Henri Nouwen, the late Catholic priest who published nearly 40 books during his lifetime, left behind thousands of pieces of unpublished material when he died in 1996. Beginning next year—the 20th anniversary of Nouwen’s death—new collections of this material will be released to the world.

Convergent Books, a division of Penguin Random House, has signed a multi-book contract with the Henri Nouwen Legacy Trust. The first book is scheduled to hit bookstores in September of 2016 and will be a collection of unpublished letters under the working title “Love, Henri.” The specific content of the projects is being kept secret, but those involved with the project hinted that the books might offer fresh revelations about Nouwen’s life and thinking, including details about the priest’s personal struggles.

Karen Pascal, executive director of the Henri Nouwen Society and Henri Nouwen Legacy Trust, says she was aware that her organization had “a treasure of wonderful unpublished materials” for years. This includes partially completed manuscripts and more than 5,000 letters, which have been sitting in an archive at the Kelly Library at the University of St. Michael’s College in Toronto, Canada.

Gabrielle Earnshaw, curator of the Henri J.M. Nouwen Archives, is responsible for selecting which letters will appear in the book. She has chosen correspondences written between 1973 and 1996 that are primarily pastoral in nature.

Nouwen’s struggles included attraction to other men, which has been a source of much curiosity among his admirers. He never publicly acknowledged his identity as a gay man during his life, and by all accounts, he remained true to his priestly vow of celibacy until his death.

“[Nouwen] had a very intense emotional life, a need to be held, and a desire for love. And, in his letters, he addressed questions of how he lives his sexuality and how he lives his celibacy,” Earnshaw says. “But I’m hoping that the issue of his sexuality doesn’t overshadow his genuine search for love, intimacy, and friendship.”

“Love, Henri” will include nearly 200 letters from the archives. According to Gary Jansen, senior editor at Convergent who is overseeing the Nouwen projects, added the “letters will probe all the topics that Nouwen is known for—brokenness, solitude, what its like to be a bit of an outsider and outcast, and how we can find hope in all of that.”

In addition publishing the letters, Convergent intends to release a gift edition of Nouwen’s “The Return of the Prodigal Son” around Christmas 2016 and a devotional of previously unpublished content sometime the following year.

The third book’s focus and subject is yet to be determined, but Earnshaw says it may focus on a unique idea Nouwen was developing since 1992. That year, he observed that trapeze artists in the circus are able to fly, take risks and be courageous because they know they have a catcher. Nouwen had an insight that humans can do the same, spiritually speaking, because they have God as a catcher.

“Henri intended to write a book based on this metaphor but he did not complete it by the time he died,” Earnshaw says. “We’re trying to find someone who can take that idea and share it in some way.”

Regardless of their subject matter, these books are significant because of their author. Nouwen was one of the first Christian writers to combine clinical psychology with spirituality. Almost all of his 40 books, including “The Life of the Beloved” and “The Wounded Healer,” are still in print today and have sold an estimated 7 million copies in 30 different languages. He pioneered an ‘intimate journal’ style of spiritual writing, and modern writers like Anne Lamott, Ronald Rolheiser, and Richard Rohr say claim their writing was inspired by Henri.

“Henri Nouwen is one of the most important spiritual writers of the 20th century, and there is still a tremendous appetite to hear from him,” Pascal says. “People will be glad to know that his compassionate heart and authenticity comes through in his previously unpublished material.”