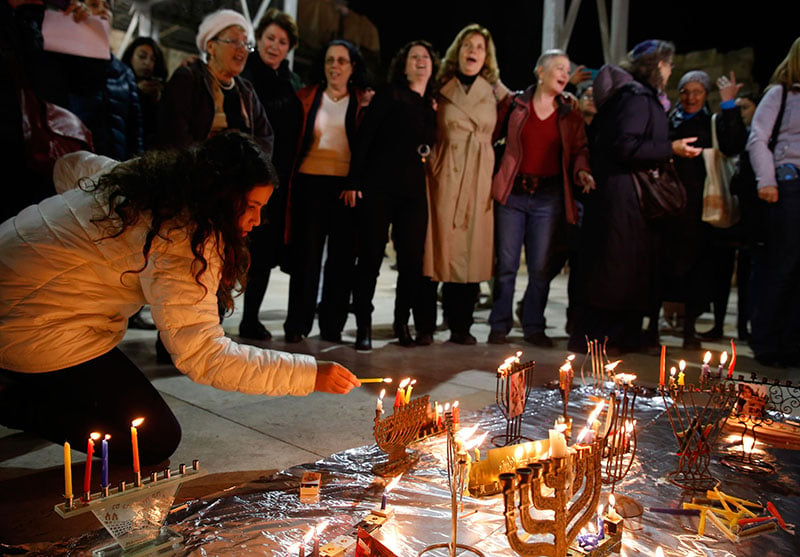 Last year Women of the Wall, a feminist prayer group, defied a directive by the rabbi of the Western Wall banning women from lighting Hanukkah candles in the women’s section of the Western Wall. Israel’s deputy attorney general said this week that women must be permitted to do so. Religion News Service photo by Ricki Rosen

JERUSALEM (RNS) Women must be allowed to light Hanukkah candles and say a prayer at the official candle-lighting ceremony at the Western Wall when the Jewish festival of Hanukkah begins on Sunday (Dec. 6), Israel’s deputy attorney general said this week.

Every year, eight official lighting ceremonies — one for each night of Hanukkah — are held in the men’s section of the Western Wall, making it impossible for women to take part.

On Monday, Deputy Attorney General Dina Zilber sent a letter to Western Wall Rabbi Shmuel Rabinowitz informing him that any attempt to ban women from this year’s ceremony would amount to discrimination.

Rabinowitz, who administers the Western Wall as a strictly Orthodox synagogue as well as a national heritage site, has long prohibited women from taking an active role in public prayer and has made it impossible for women to access Torah scrolls or light Hanukkah menorahs because they are placed only in the men’s-only prayer section.

In her letter, Zilber asked Rabinowitz to confirm that “steps are being taken to include women in the official candle-lighting ceremony. Preventing the participation of women in state ceremonies, such as the ceremony in our case, just because they are women, is unacceptable discrimination.”

Underscoring the matter’s urgency, Zilber told Rabinowitz, “the sooner we can get a list of all the participants expected to take part in these ceremonies, as soon as the list is available, it will be a great help.”

As part of its campaign “It’s My Right to Light,” the feminist prayer group Women of the Wall sent letters to Israeli leaders on Nov. 9 asking them to refuse to participate in the official Hanukkah ceremony at the Western Wall and calling on female parliamentarians to press for participation.

Anat Hoffman, chairperson of Women of the Wall, called it “so symbolic that the Women of the Wall should be the match that lights the flame of the first candle” at the national Hanukkah ceremony at the Western Wall.

“It doesn’t matter which woman is chosen for this great honor,” she said.

Rabbi Uri Regev, a Reform rabbi and head of Hiddush, a nonprofit focused on religious freedom, said “an important, new chapter was written today in the shaping of Israel as a Jewish and democratic state.”

(Michele Chabin is the Jerusalem correspondent for RNS.)