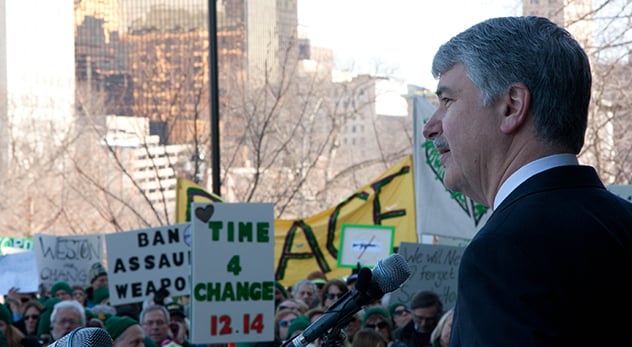 By now, everyone with an internet connection knows about the San Bernardino, California shooting that claimed the lives of at least 14 people.

A tragedy like this, while deeply troubling, should not be surprising to those paying attention. As Christopher Ingraham of The Washington Post reported in August, “we’re now averaging more than one mass shooting per day.” But the reaction on social media was less predictable.

From Senator Lindsey Graham to Governor George Pataki, Twitter and Facebook were peppered with comments from conservatives who promised their “thoughts and prayers” to the victims affected by the shooting. In response, many advocates of gun reform fired back with a round of “prayer shaming,” claiming that their sentiments were hollow because they were not backed up by tangible legislative proposals. The liberal watchdog website “Think Progress” even accused these well wishers of having been bought by the National Rifle Association.

It is impossible to judge these leaders’ true motives or whether they have actually been on bended knee since the news broke. But [tweetable]the problem with prayer is that it cannot be offered in isolation. Not when action is possible and necessary.[/tweetable] This idea did not originate on social media. It is a biblical idea sewn throughout the New Testament, and those who oppose even the tiniest reforms to our gun laws must now reckon with it.

The Apostle John made this argument in his first epistle regarding the issue of poverty. If someone sees a person in need and has the means to help but “has not pity on him,” John said the love of God is not present in that person. “Let us not love with word or tongue but with actions and in truth,” he said.

The New Testament writer James makes a similar statement in the second chapter of his epistle: If a brother or sister is poorly clothes and lacking in daily food, and one of you says to them, “Go in peace, be warmed and filled,” without giving them the things needed for the body, what good is that? So also faith by itself, if it does not have works, is dead.”

Jesus is not quite as explicit as these New Testament writers, but he is by no means silent on the matter. He described the religious leaders in his community as people who “preach, but do not practice.” While he did not condemn their words, he asked them to give more—to do more.

When it comes to resisting violence, conservatives are not cowards. Indeed, one thing seems fairly certain: If it turns out that this tragedy was perpetrated by ISIS or a similar group, conservatives will be talking about action, not merely offering prayers. We must now ask why it is that only certain types of violence inspire action among some.

Leaders will debate what should be done in the face of an epidemic of violence, but something must be done. A life of faith is a life of prayer and action, but never one without the other. [tweetable]Action without prayer is merely activism, and prayer without action is useless piety.[/tweetable]

So today, I too will be in prayer. For the victims of this terrible tragedy and that justice will be served among the perpetrators, yes. But I’m also praying that those who fold their hands will put their hands to work for the sake of the common good. Let our words be coupled with action.