Books and films on heaven and near-death experiences came under scrutiny in 2015. Theologian Scot McKnight says that the topic has become muddled with myths and extra-biblical notions. – Image courtesy of Chris Jones (http://bit.ly/1MJD24V).

The last time that famed ball dropped in Times Square, Americans seemed hooked on heaven. A glut of books purporting near-death experiences flooded the marketplace. “Heaven is For Real,” a film based on a massively popular book about a boy who claimed to have visited heaven, brought in nearly $100 million at the box office. And a small faith-based film company invested an estimated $5 million to begin production on “90 Minutes in Heaven,” a movie based on another book about a near-death experience. Heaven was having its heyday.

After 2015 dawned, however, something shifted. Heaven books and near-death accounts came under greater scrutiny. Alex Malarky, author of popular “The Boy Who Came Back From Heaven,” admitted that he made the story up and did not actually meet Jesus while in a coma and America’s largest Christian retailer, Lifeway Christian Stores, announced they were pulling “heaven visitation” books from their shelves. “90 Minutes in Heaven” tanked at the box office in September, despite big name stars Hayden Christensen and Kate Bosworth’s involvement.

Part of the problem is that there are too many conflicting teachings about heaven and near-death accounts differ in their descriptions. Yet, Americans are still interested in the afterlife. A Pew poll in November reported that nearly 75 percent of Americans believe in heaven (defined as a place “where people who have led good lives are eternally rewarded). They just need help separating fact from fiction.

For this, I decided to talk to Scot McKnight, a leading New Testament theologian and author of “The Heaven Promise: Engaging the Bible’s Truth About the Life to Come.” Here we discuss what the Bible does (and does not) say about the afterlife and which principles we should consider when engaging in conjecture about heaven.

RNS: What do we actually know about what heaven is like from the Bible?

SM: As Christians we need to ask ourselves a simple question: “How do we know what (we claim to) know?” Or, more importantly, how do we claim truth about God and the gospel? The Protestant answer has been sola scriptura, that is, we begin and base what we know and what we claim as truth on the Bible.

In our postmodern world, red flags pop up everywhere. Isn’t it the case, someone might ask, that what we think we know is actually what we’ve interpreted so what we know is our interpretation? The answer is yes, but there is a deeper theological truth: God made us and made us to communicate truthfully and effectively with one another and with God. Hence, I believe that even when our contexts shape what we read in the Bible, that context can be penetrated deeply by the truth of God’s Word effectively.

So, we go to the Bible for our understanding about heaven.

What we know about heaven from the Bible is gathered from three kinds of passages: the far hopes of the prophets, the sketches of Jesus and others about what life is supposed to be like in the kingdom, and the Book of Revelation’s final visions, which put into summary form what we have seen in the first two kinds of passages.

RNS: Some people are skeptical of these kinds of books. Are you? Why or why not?

SM: Yes, I confess I’m skeptical about a lot of things people say about heaven. I’m skeptical because near-death experiences are (1) a common human experience that (2) have been occurring since the beginning of recorded civilization and (3) those experiences, while there are some common themes, are shaped deeply and sometimes entirely by that person’s religion, culture, philosophy or religion embedded in the “experiencers” brain, and (4) the near-death experience stories vary wildly from one generation and culture to another.

RNS: You talk about children who die in your book, which interests me. Most Christians I know believe that children who die don’t go to an eternal hell–the so-called “age of accountability”. What say you? Is this concept found in the Bible?

SM: There is nothing in the Bible about babies in heaven nor are there any scenes in the Bible that reveal the presence of babies. So, we are left to our theological sensibilities and theological intuitions. Some have been very rigorous: “only babies of Christians go to heaven or only baptized babies go to heaven.” Others are more theological: “those babies whom God foreknew or predestined will be in heaven.” While others are more open: “all babies, of course, go to heaven.”

My belief is rooted in one deep biblical and theological theme: God is good. Whatever happens will be good, and I believe our good God will do what is right. From how the Bible presents what is right, I would say God will not punish those who don’t deserve it and God will make all things right. So I believe they are in the hands of our good God, and there is no better place to be. 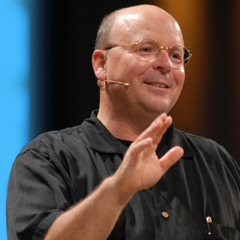 Scot McKnight is a leading New Testament scholar and author of The Heaven Promise.

RNS: I’ve started to think that I want to be cremated when I die. Maybe I am just too cheap to buy a grave plot. How should a Christian think of cremation and/or burial?

SM: The Bible’s big theme about life to death is “from dust to dust.” If we take that line seriously, we arrive at this: death is the beginning of a process – natural or biological – that returns each human being to dust.

If death is a dust-turning, then cremation merely speeds up the dust-turning. I see no problem in the practice of cremation. Some people, sadly, have a low view of themselves and see cremation as their own annihilation or elimination or extinguishing, but this fails to embrace the greatness of humans as made in God’s image. So, even if some want cremation for unworthy reasons, on the far side of the dust-turning when God will remake us for the new heavens and the new earth, we will discover a full appreciation of what it means to be made in God’s image.

RNS: I heard a pastor recently tell his church they should give sacrificially because, after all, there will be a reward for them in heaven if they do. What does the Bible say about rewards in the afterlife?

SM: Lots and then some more. “Reward” is a rhetorical term in the Bible designed to motivate people to live well before God because (1) God is watching and judging and (2) what we do in this life has a correlation with what we will do in the new heavens and the new earth – though it will be far surpassed in God’s gracious blessing to us and far beyond what we could have imagined.

As rhetorical language, however, it is not designed to tell us that we what we get in heaven is merited or earned or based in and of ourselves. The Bible’s depiction of rewards eventually reveals that whatever we earned (our “crowns,” etc) will be thrown before the feet of the Lamb on the Throne of God for the gracious provision so that we could even do those things.

RNS: Do you think Christians ever abuse the concept of rewards?

SM: They have, they do, and they will continue to do. It’s a cheap manipulation to press before our hearts and minds too often this theme of reward: it turns heaven into competition and us into competitors with others. This fails at the basic level of relationship: as we shouldn’t be competing for our loved one’s attention or that children shouldn’t be competing with one another for the affection of their parents, but should instead bask and dwell in love given, so we should be preoccupied not with getting God’s favor but dwelling in God’s love.

RNS: You have a chapter titled, “Will there be pets in heaven?” I don’t know that I want my childhood demon dachshund there, but I wouldn’t mind my mom’s Boston Terrier showing up. Will pets make it?

SM: Here we get to the core of my book: the “heaven” we look forward is not the present heaven but the future “new heavens and new earth.” The present heaven, Revelation 20—22 shows, will descend and be married to earth so that God will recreate both the heaven and the earth into a new heavens and new earth. The depiction of that new heaven and new earth is profoundly earthy and earthly where our bodies will be transformed and our earth will be transformed from dust into glory.

Which brings me now to pets: what God has done on earth in his fabulous creation will be transformed into an even more fabulous creation of glory. So I believe on this basis that what we experience now at the good hand of God will be transformed in the new heavens and the new earth. I don’t know about your dogs, but our Bichon will make it. I’m thinking our bossy and temperamental dachshund will need some serious transformation!

RNS: What about people who have never heard the Christian Gospel? Do you think they have a chance at making it to heaven?

SM: I go back to what I said about babies: God is good, God is love, God is just. They are in the hands of this loving, good and just God. There is no better place to be. But I do know this: Jesus is the template of the new heavens and the new earth. I know heaven is designed by and for Jesus so the only ones in heaven will be those who are in Christ.