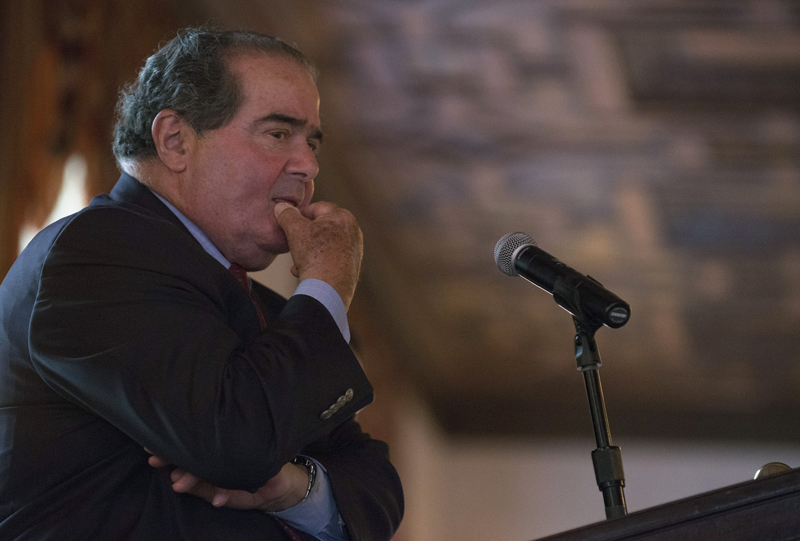 U.S. Supreme Court Justice Antonin Scalia listens to a question after speaking at an event sponsored by the Federalist Society at the New York Athletic Club in New York on Oct. 13, 2014. Photo courtesy of REUTERS/Darren Ornitz
*Editors: This photo may only be republished with RNS-SCALIA-RELIGION, originally transmitted on Jan. 4, 2016.

(RNS) Supreme Court Justice Antonin Scalia is never shy about voicing his strong, and strongly conservative, opinions about the role of religion in American society, and he has once again made headlines with what he called a “sermon” in which he said the U.S. Constitution can favor religion over “nonreligion.”

In fact, Scalia told a gathering at a Catholic high school near New Orleans on Saturday (Jan. 2), “one of the reasons God has been good to us is that we have done him honor.”

“Unlike the other countries of the world that do not even invoke his name, we do him honor. In presidential addresses, in Thanksgiving proclamations and in many other ways,” he said in a brief talk at Archbishop Rummel High School in Metarie, according to various news reports.

New Orleans Archbishop Gregory Aymond introduced Scalia to the crowd of about 600 that had gathered for an annual celebration of religious freedom.

In his brief remarks, Scalia said that the principle of religious neutrality has been twisted by jurists since the 1970s to mean that traces of religion must be banished in favor of a purely secular public square. He called that idea “absurd.”

“To tell you the truth, there is no place for that in our constitutional tradition. Where did that come from?” he said. “To be sure, you can’t favor one denomination over another. But we can’t favor religion over nonreligion?”

Scalia said justices should follow the customs and common experiences of the American people on matters of faith more than “abstract principles.”

He said that if the American people at some point decide they want to “impose” secularism on the U.S., “I don’t have a problem with that as long as it is done democratically.”

But, he added, “Don’t cram it down the throats of an American people that has always honored God on the pretext that the Constitution requires it.”

Scalia, 79, was appointed in 1986 by President Reagan and is the high court’s longest-serving justice. He frequently makes headlines with comments in speeches as well as from the bench; in oral arguments last month on a crucial affirmative action case before the high court, he came under fire for questioning whether some black students would benefit from going to “slower-track” schools.

“I hope Scalia … lives to be a hundred and ten, and dies on the bench, fighting,” columnist Rod Dreher, who attended the talk, wrote at the American Conservative.

“Scalia is right to say that there is nothing in the Constitution that requires the government to be neutral about religion,” said William Donohue of the Catholic League.

In addition to a decision on affirmative action, the Supreme Court this year is set to rule on a number of key cases of great interest to faith groups, including the contraception coverage mandate in the Affordable Care Act that some religious groups say forces them to allow employees to get health insurance coverage for birth control and for prescriptions that they say can cause abortions.