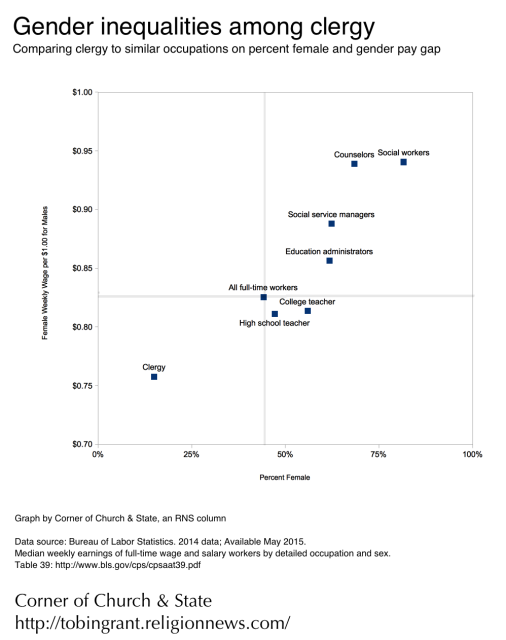 The graphic is not offered for republication.

New national data reveals that women clergy earn 76 cents for each dollar earned by male clergy. This is substantially worse than the national pay gap of 83 cents. The clergy pay gap is even more stark when compared to similar occupations.

Up until this year, national data on the clergy pay gap was unavailable. There were denominational surveys or surveys of clergy from similar faiths, but we lacked national data that would include churches and faiths left out of those surveys. Even with large surveys of churches, there was no way to make valid comparisons to the pay in other occupations.

This year, however, the Bureau of Labor Statistics (BLS) reported the national median income for both male and female clergy. The BLS collected data on this before, but could not make reliable estimates for women because of their relatively few numbers. The BLS was able to report these figures this year, making it possible to calculate the pay gap among clergy.

Nationally, women make up 44 percent of the full-time or salaried workforce. The pay gap nationally is 83 cents. But this national patterns is based on all workers, from unskilled labor to CEOs.

The clergy pay gap is worse than for similar occupations. Just over half of all high school and college teachers are women, and the pay gap is just under the national average for both occupations.

The gender gap is narrower for other similar occupations including education administrators and managers of social or community services. Counselors and social workers are much more likely to be female. These occupations have a smaller gap, with women earning around 95 cents for each dollar a man earns.

The BLS report does not include all occupations at churches and other religious organizations. Religious communities hire other employees, such as bookkeepers and custodians. The Clergy Compensation Handbook reports the results of compensation surveys Christian churches, many of which are evangelical. There is a substantial pay gap in these churches in all occupations except two: Clergy at churches with only one pastor (94 cents; women are eight percent of all solo pastors) and women secretaries ($1.06; women are 97 percent of secretaries).