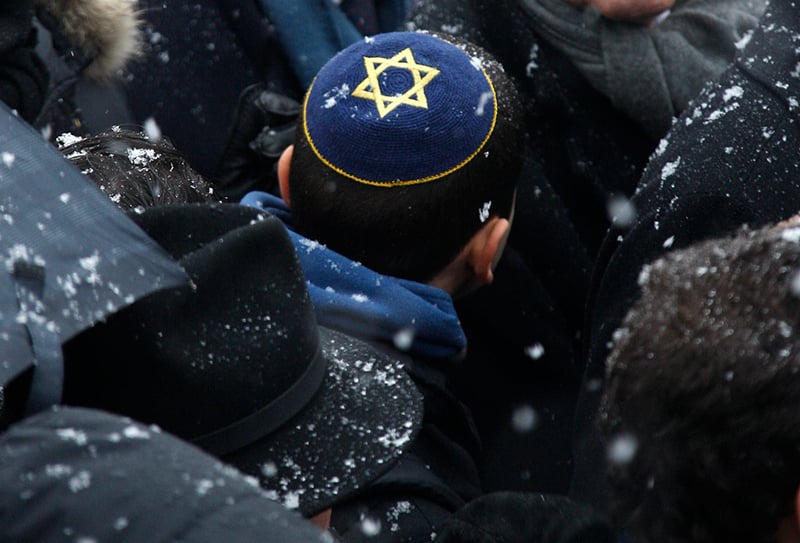 A man wearing a skullcap is seen during a demonstration called by the Representative Council of Jewish Institutions in France (CRIF) in front of the European Parliament in Strasbourg on Jan. 14, 2009. Photo courtesy of REUTERS/Vincent Kessler
*Editors: This photo may only be republished with RNS-YARMULKE-FRANCE, originally transmitted on Jan. 13, 2016.

PARIS (RNS) Claude Chiche doesn’t wear a skullcap, but he has strong opinions about them.

“There are some here want to take off their kippah because they’re afraid,” said Tunisian-born Chiche, referring to the Hebrew word for yarmulke or skullcap. “But they shouldn’t accept this; they shouldn’t give in to fear.”

Chiche’s comments, spoken in a Paris neighborhood that is home to many Orthodox Jews, add to a growing debate among France’s half-a-million-strong Jewish community after a skullcap-wearing Jewish schoolteacher in Marseille was attacked Monday (Jan. 11) by a Kurdish teenager claiming allegiance to the Islamic State.

After the attack, the head of Marseille’s Israelite Consistory, Zvi Ammar, suggested Jewish men and boys should stop wearing the skullcap “until better days.”

“As soon as we are identified as Jewish, we can be assaulted and even risk death,” he added.

Coming just after the one-year anniversary of January’s terrorist attacks in Paris that killed 17 people — including four Jews — the latest aggression has intensified fears among Jews of more violence to come.

Already thousands have left the country in recent years — with a large number heading to Israel.

Still, top Jewish leaders are urging male faithful to remain true to their religious identity and to keep their skullcaps on.

“We should not give an inch,” said France’s chief rabbi, Haim Korsia.

Roger Cukierman, head of the national Jewish umbrella association CRIF, agreed, saying that removing the kippah in public amounted to a “defeatist attitude.”

Sociologist Martine Cohen of the Paris-based CNRS research institute said many French Jews today battle conflicting sentiments. They want to live their faith openly, but at the same time they fear reprisals for doing so.

“Many French Jews feel completely integrated in France,” she said, “even as they are more vigilant than ever against anti-Semitism.”

RELATED STORY: ‘Tis the season to be afraid?

Israel Nessim, who stood outside a small synagogue in northeastern Paris, briefly removed his bowler hat to show his kippah underneath.

“As Jews, we have obligations towards our religion,” he said. “We have to stick to our traditions. Even if we don’t wear one, we’ll always be attacked,” Nessim added. “We’ll always be recognized as Jews.”

Wearing a kippah or yarmulke is seen as obligatory among Orthodox Jewish men and boys, especially when studying Torah or entering a synagogue.

France is not the only country where the skullcap has become a lightning rod. In neighboring Germany last year, Jewish leader Joseph Schuster advised Jewish men to forgo the kippah in areas with high Muslim populations, over fears of anti-Semitism.

Separately on Tuesday (Jan. 12), a French Jewish politician was found dead in his home outside Paris, in what reports suggest appears to be a homicide.

(Elizabeth Bryant is a Paris-based contributor to RNS)