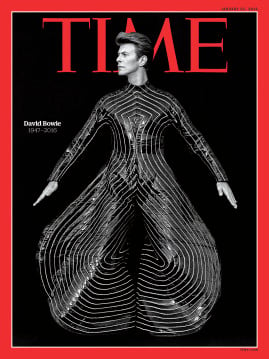 The cover of the current edition of Time magazine, which leads with a tribute to the late David Bowie.

(RNS) One of the first and notable tributes to David Bowie to pop up on social media when news of his death was announced was a tweet from what seemed like an unlikely source: Cardinal Gianfranco Ravasi, who basically serves as the culture minister for Pope Francis at the Vatican.

But Ravasi is in fact a widely read intellectual with a passion for engaging every facet of culture and society, so his Twitter tribute -- a few lines from Bowie's "Space Oddity" -- were in keeping with his approach.

It seems the cardinal's appreciation of Bowie's artistry went much deeper than 140 characters, however, and Ravasi subsequently penned an extended appreciation in The Tablet of London that, he wrote, "arises from an effort I made long ago to uncover his secret and implicit spirituality":

The references in Bowie’s art and music to spirituality, often in anguish and torment, are more than can be counted, and were never excluded from his life. “I’m a young man at odds / With the bible / But I don’t pretend faith never works / When we’re down on our knees / Prayin’ at the bus stop,” he wrote in “Bus Stop”, one of the tracks on the album Tin Machine (1989).

The arrival of Jesus on earth left Bowie with a mix of hope and incredulity. Yet he never abandoned that part of his soul, he never ceased asking for a sign from God: “Open up your heart to me / Show me who you are / And I would be your slave … Give me peace of mind at last / Show me all you are / Open up your heart to me (“I Would Be Your Slave” from the album Heathen, 2002) ...

... This moral tension will certainly be present in his final album, Blackstar, released only two days before his death. I am not fully familiar with it yet, but I am sure that this great original, a leading protagonist of contemporary music, who was always on the unstable boundary between the sacred and the profane, will again speak, in his own way, of the spiritual.

Bowie’s unique voice managed – even if “laically”, in a non-churchy way – to make the souls of all those with a restless conscience vibrate.

Ravasi's praise has raised some eyebrows, and one priest, the Rev. George Rutler, a traditional-minded pastor from New York, wrote a pointed dissent that blasted Ravasi and the Vatican for praising Bowie as representative of a dissolute culture:

I speak not only as an aesthete who publicly avows that he prefers Mozart and Chopin to (Michael) Jackson and Bowie, but as a priest who has to pick up the pieces of those who never knew they had a choice. And I object to comfortable prelates in a higher realm, penning panegyrics for the doyens of a culture that destroys my children ...

... Christ was a carpenter and his apostles were mostly fishermen and none of them was what is called today a “metrosexual.” I am not sure what that term fully means, but it embraces anyone who weeps for paragons of degeneracy and paladins of vice.

Or, if you prefer a more concise form, there was this tweet from Bill Donohue of the Catholic League:

All I know is that Bowie was a switch-hitter who tried to sing.

UPDATE: Be sure to check out the Christianity Today appreciation from Greg Thornbury, an evangelical admirer of Bowie, light and shadow:

David Bowie: The Pulse Returns to the Prodigal
What do we learn from the complicated legacy of a beloved icon?