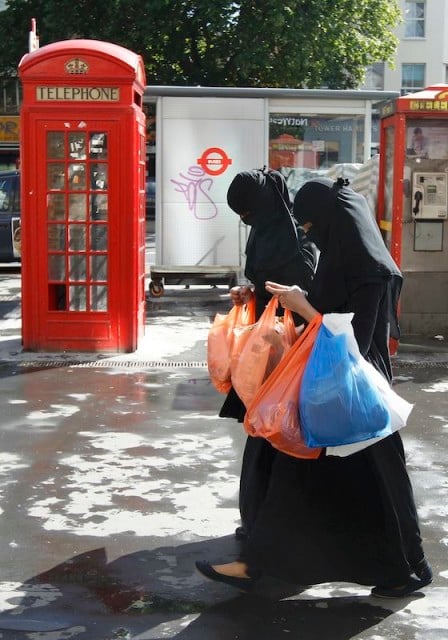 Muslim women in England will be offered English classes and tested within three years of arrival or they may be asked ot leave Britain. REUTERS/Luke MacGregor/files

LONDON (USA Today) — Prime Minister David Cameron on Monday attacked what he called  “passive tolerance” of some people in Britain’s Muslim communities who support segregation and discrimination against women, and said his government would make it harder for migrants to remain in the country if they did not learn English.

“Where in the world do you think the following things are happening? School governors’ meetings where male governors sit in the meeting room and the women have to sit out of sight in the corridor. Young women only allowed to leave their house in the company of a male relative. Religious councils that openly discriminate against women and prevent them from leaving abusive marriages. The answer, I’m sorry to say, is Britain,” Cameron said in an opinion piece for the (London) Times.

The British leader wrote the column as part of a drive to counter what he said was, for many British Muslim women, “an alarming picture of forced gender segregation, discrimination and social isolation from mainstream British life.” He said that this failure to integrate helped foster extremism.

“I am not saying separate development or conservative religious practices directly cause extremism. That would be insulting to many who are devout and peace-loving. But they can help a young person’s slide towards radicalization,” the prime minister said. He said he was ordering a review of the impact of religious councils, includingSharia councils, on those receiving British education. “I want every young boy and girl growing up here to feel proud of our country and properly connected to it,” he said.

Britain’s Sharia councils give advice and sometimes rulings based on Islamic law and principles to the nation’s Muslim community. Islam is the second largest religion in Britain, according to the most recent census data, with about 2.6 million adherents to the faith here, or just over 5% of the population. The Muslim population is larger than all other non-Christian faiths put together and 47% of Muslims are British-born, the census data show. The last census data were collected in 2011.

In his opinion piece, Cameron also drew a connection between “forced gender segregation” in Britain and learning the English language.

“It is at the heart of solving this,” he said. “Consider this: new figures show that some 190,000 British Muslim women — or 22%— speak little or no English despite many having lived here for decades. 40,000 of these women speak no English at all. So it’s no surprise that 60% of women of a Pakistani or Bangladeshi heritage are economically inactive.”

He said that some men in Britain’s Muslim communities prevented women from learning English and that starting from October anyone arriving in Britain on a five-year spouse visa will need to take a test, after two-and-half-years, to prove their English is improving.

However, a study published in January 2015 by the Muslim Council of Britain, a group with over 500 affiliated national, regional and local organizations, mosques, charities and schools that promote Muslim affairs, also based on the 2011 census data, found the number of British Muslim women who were “struggling” with English was far lower, at 6%.

The prime minister’s office did not immediately reply to a question about how it arrived at the figure of 22%.

“No one would expect or indeed want British Muslims, or any other group, to lay aside their faith, traditions or heritage,” the report from the council said. “But they must not forget that for the child to prosper in Britain and to reach his or her full potential, he or she will also have to have fluent command of English,”

Mohammed Shafiq, chief executive of the Ramadhan Foundation, a Muslim organization based Manchester, accused Cameron on Monday of using the piece in the Times to appear tough over rising concerns about immigration during Europe’s ongoing migrant crisis.

“We face an increased risk from terrorism and an ideology of hatred,” Shafiq said. “The best way to confront it is to build support within Muslims and support the work done across the country, and not lashing out and denigrating Muslims.”

Cameron’s remarks come amid an increasing backlash against asylum seekers in Europe following the revelation that hundreds of women were sexually assaulted and robbed in Cologne on New Year’s Eve by a mob of foreign-born men, at least some of whom were asylum seekers.

It is time, Cameron said Monday, for Britain to be “more assertive about our liberal values, more clear about the expectations we place on those who come to live here and build our country together and more creative and generous in the work we do to break down barriers.”

Britain has pledged to accept 20,000 refugees over the next five years, a number heavily criticized by activists and rights group who say it should accept far more. Germany has let in over a million asylum seekers from conflict zones from Syria to Iraq to Eritrea.