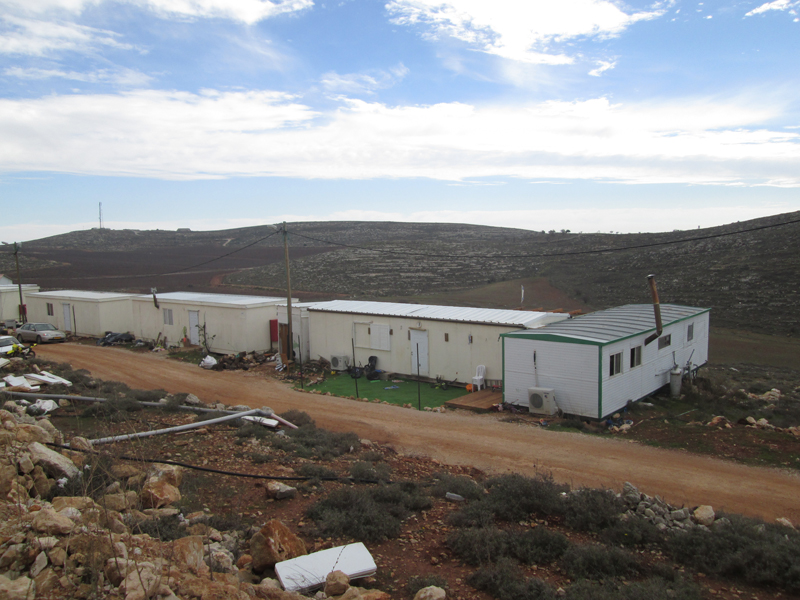 ESH KODESH, West Bank (RNS) On this unauthorized hilltop outpost the only sound for miles around is of a dog barking or a rooster crowing.

Just 40 young religious Jewish families live on this windswept spot some 30 miles north of Jerusalem, and on this January day most of their children — about 150 in total — are in school down the road in Shilo, the nearest Jewish settlement.

But Israeli authorities say the seeming tranquillity of Esh Kodesh and roughly 100 other settler outposts, or tiny settlements built without Israeli government approval, is deceptive: They say they are a breeding ground for Jewish extremism.

A small percentage of the 10,000 “hilltop youths” residing in illegal outposts are suspected of attacking Palestinians or vandalizing churches and mosques on Palestinian-owned property, but their actions have elicited international condemnation and placed a spotlight on the Israeli “Religious Zionist” community in which most of these teens and young adults were raised and educated. The community, made up of hundreds of thousands, uses the term “Religious Zionists” because its members support the state of Israel as well as the right of Jews to live in the captured West Bank.

Five of these youths were indicted on Jan. 3: Amiram Ben-Uliel, 21, on charges of murdering three members of a West Bank Palestinian family in a July 2015 firebombing; and four others on a range of alleged offenses, including an attack on Dormition Abbey, a Catholic community of Benedictines in Jerusalem. All of the suspects spent time at unauthorized outposts.

The arson, which even Israel’s right-leaning politicians acknowledged as a Jewish terror attack, has left Israelis, and particularly Religious Zionists, searching for answers.

Leftists accuse these Jews, many of them settlers, of turning a blind eye to extremist rabbis believed to be inciting violence.

“We know there are some specific rabbis who have written books saying that when it comes to a fight with the Palestinians over land, it isn’t a crime to kill innocent civilians,” said Yariv Oppenheimer, general director of Peace Now, an activist group in Israel that is supportive of territorial compromise. “These rabbis are teaching that land is more important than the laws of the state, and no one is stopping them.”

But Religious Zionists say the picture is more complex.

Rabbi Dov Birkovits, a moderate rabbi and educator, said most of the young extremists are high school dropouts.

“These youths reject Religious Zionist leadership, their teachers, their parents and their rabbis,” he said. “They’re like juvenile street gangs in the U.S. They’re disillusioned young men rebelling against authority.”

Birkovits traced some of the youths’ disillusionment to the 2005 Gaza disengagement, when Israel’s army uprooted 10,000 Israelis from their homes and razed their communities. In response, Hamas intensified its rocket attacks against Israel.

“The disengagement was a deep psychological and ideological trauma” for children and teens who were taught that settling the land is a Torah commandment, Birkovits said. “They considered the leaders of the settler movement traitors for not preventing the disengagement. They’re revolting against their elders.”

Kimmy Kaplan, an expert in Jewish extremism at Bar-Ilan University, said young Israeli and Palestinian extremists are products of the same conflict.

“Not to justify their violent acts in any way, but it should be said that when someone lives in an ongoing violent atmosphere, it will have an influence. When their actions are backed up by rabbis or imams associated with fringe groups, it can influence teens.”

Rabbi Yuval Cherlow, co-founder of Tzohar, a Modern Orthodox rabbinical organization, said the youths’ former rabbis “are cooperating with the authorities and trying to convince their former students to obey the law.” But, he said, hilltop dwellers aren’t listening.

“For religious people our laws are first and foremost God’s commandments, and the law of the state is usually secondary. In our yeshivas, much more time is devoted to religious subjects than to civil rights. We must educate our children that democracy is a good system and that disagreements must be solved through elections and demonstrations, not by misusing power.”

Back at Esh Kodesh, which was established in 2000 to commemorate Esh Kodesh Gilmore, a victim of a Palestinian terrorist attack, residents distanced themselves from the hilltop violence and said sporadic clashes over land ownership were started by the Palestinians.

Palestinians respond that in 2014 hilltop youths torched cars, cut down 30 fruit trees in two West Bank villages and scrawled the words “Esh Kodesh” on the walls.

Aaron Katsof, a father of five who moved to Esh Kodesh five years ago, said those attacks “had nothing to do with us. We’re against violence and clearly it would be stupid to sign our name on a wall” at the scene of an attack. Aaron Katsof, a father of five who moved to Esh Kodesh five years ago, says he and his neighbors are against violence. Religion News Service photo by Michele Chabin

Gazing down at his vineyard in the valley, Katsof, a native Californian who moved to the outpost from Tel Aviv, said, “I personally moved to Esh Kodesh for quality of life but I also believe, ideologically, that the land of Judea belongs to the Jews.”

Katsof said there can be no peace between Israelis and Palestinians “until the Palestinians stop their incitement on TV and stop naming schools after terrorists.”

But news reports suggest Katsof and several Esh Kadosh residents may be provoking Palestinians by cultivating a field that the High Court of Justice ruled belongs to Palestinians.

He denied that the settlers are inflicting violence. “We condemn violence,” he said. “We have nothing to do with it.”

Opinion
The most Jewish thing that Ruth Bader Ginsburg ever did
News
Ruth Bader Ginsburg, who died Friday, was shaped by her minority faith
Martini Judaism
COVID has led us all into sin
News
600 faith leaders sign letter urging California governor to stop transfer of incarcerated people to ICE
Opinion
Abraham would be proud
© Copyright 2020, Religion News Service. All rights reserved. Use of and/or registration on any portion of this site constitutes acceptance of our User Agreement and Privacy Policy, Privacy Statement and Cookie Notice. The material on this site may not be reproduced, distributed, transmitted, cached or otherwise used, except with the prior written permission of Religion News Service.