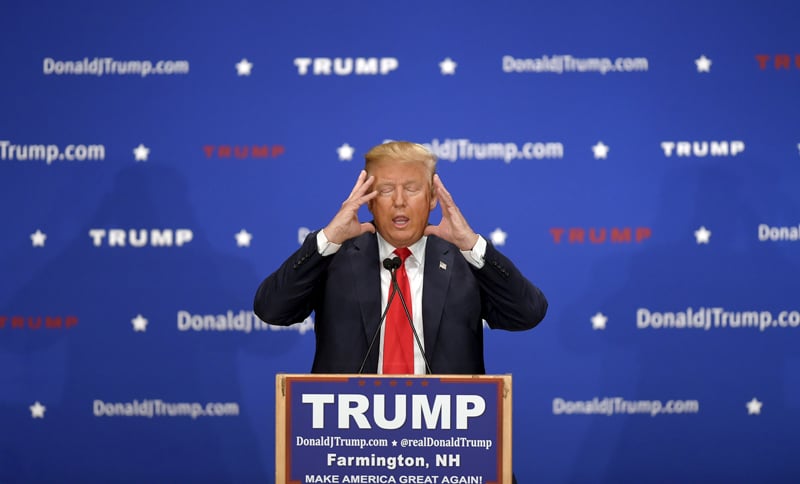 Republican presidential candidate Donald Trump addresses the crowd at a campaign rally in Farmington, N.H., on Jan. 25, 2016. Photo courtesy of REUTERS/Gretchen Ertl
*Editors: This photo may only be republished with RNS-WAX-COLUMN, originally transmitted on Jan. 26, 2016.

(RNS) In 1999, Donald Trump claimed to be “pro-choice in every respect”, to the point he would have opposed a ban on late-term and partial-birth abortions. His position at that time reflected the extreme edges of abortion ideology. A mere 14 percent of Americans believe third-trimester abortions should be legal.

But Trump has since switched sides, a move that makes sense in today’s political climate. Since the 1990s, abortion has become one of the starkest and most consistent lines of demarcation between Democrats and Republicans. It is virtually inconceivable that a Democrat opposing abortion or a Republican supporting legal abortion could win the respective party’s presidential nomination.

In a debate last year, Trump claimed he had “evolved” on the issue of the abortion. “I am very, very proud to say that I am pro-life,” the GOP candidate said.

But the way Trump described his “evolution” from the pro-choice to pro-life position raises some interesting questions.

He said: “Friends of mine years ago were going to have a child, and it was going to be aborted. And it wasn’t aborted. And that child today is a total superstar, a great, great child. And I saw that. And I saw other instances.”

Now, I’m one who cheers whenever someone publicly switches from supporting abortion rights to supporting human rights for all — including the unborn. I am glad to see people like Norma McCorvey, the “Jane Roe” of the Roe v. Wade decision that legalized abortion, or Bernard Nathanson, founder of the National Association for the Repeal of Abortion Laws, become pro-life activists.

But I find it difficult to cheer Trump’s conversion, because the reason he gives for being pro-life doesn’t correspond to the pro-life ethic.

Trump says he is pro-life because of a “superstar” child who could have been aborted.

Consider how he responded to a reporter who wondered if he would have become pro-life had the child been a “loser”: “Probably not, but I’ve never thought of it. I would say no, but in this case it was an easy one because he’s such an outstanding person.”

To summarize Trump’s view: “I’m pro-life because we shouldn’t abort fetuses that may grow up to be outstanding people.”

But opponents of abortion take a different position: “I’m pro-life because we shouldn’t kill innocent human beings, no matter who they might grow up to be.”

Trump’s reason for being pro-life depends on the potential outcome of the child in the womb, rather than the fact that there is a child in the womb. But the pro-life ethic is grounded in the inherent worth of all humanity. It is wrong to commit violence against innocent human beings. Full stop.

And that’s where, ironically, Trump’s position sounds similar to the pro-choice idea that the human fetus is “potential life” or that the value of the unborn depends on whether or not the child is “wanted.”

Extending Trump’s logic leads to more problems. If we adopt the position of abortion opponents merely because of what a child may grow up to be (a “superstar!”), then why should we care if 67 percent of Down syndrome children are aborted after a prenatal diagnosis? What would Trump say if he were told there’s a better chance an “unwanted” child from an impoverished or minority neighborhood would grow up to be involved in crime?

These are not far-off questions in the abortion debate. Pro-life people are concerned with “gendercide” in Asia, where girls are aborted at much higher rates than boys. (The reason is often outcome-based. Families want boys to carry on the family name.)

Abortion opponents are also concerned with the social pressures that lead to higher abortion rates in minority communities, where, for example, in New York City, an African-American child is more likely to be aborted than born.

If the “right to life” is in any way dependent on what the probable outcome of a child will be, then we are right back where we were a century ago, when the forerunners of today’s abortion industry were advocating eugenics to “weed out” less desirable groups.

Not surprisingly, when discussing the government’s unwillingness to fund abortions through taxes, Supreme Court Justice Ruth Bader Ginsburg claimed that at the time Roe v. Wade was decided “there was concern about population growth and particularly growth in populations that we don’t want to have too many of.”

But back to Trump. Pro-life activists are always glad to welcome new people to their ranks — whether they are celebrities like Kelsey Grammer and Patricia Heaton, pundits like Bob Beckel or politicians like New Jersey Gov. Chris Christie.

So it may seem like nitpicking to ask additional questions of Trump. But we have to ask these questions anyway, because they take us to the heart of the issue and help us discern the depth of their convictions.