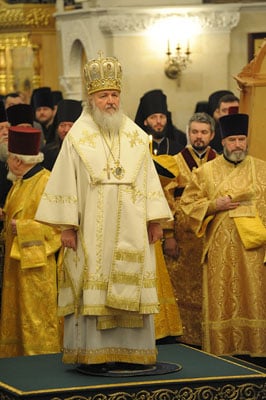 Metropolitan Kirill was elected on Jan. 27, 2009 as the patriarch of the Russian Orthodox Church. Photo courtesy of Moscow Patriarchate

According to the surprise announcement, made simultaneously on Friday (Feb. 5) in Moscow and at the Vatican, Francis will make a brief stopover in Havana on Feb. 12 before continuing on to Mexico for a six-day visit.

Kirill will already be in Cuba on an official visit and will meet the pontiff for two hours at Havana’s Jose Marti International Airport before signing a joint declaration with Francis.

It will be the first time in history the leader of the Catholic Church has met with a Russian patriarch.

The Eastern and Western branches of Christianity split in the Great Schism of 1054. Today there are about 1.2 billion Catholics in the world and upwards of 250 million Orthodox, and perhaps two-thirds of them are Russian Orthodox.

Orthodox Christianity is made up of a number of churches, largely based in Eastern Europe or the Middle East and grouped by nationality and language and cultural traditions as well as theology.

The ecumenical patriarch of Constantinople — modern-day Istanbul in Turkey — is the formal leader of Eastern Orthodoxy, the “first among equals.” But each church is fiercely independent and the Russian church has been especially careful to assert its autonomy.

But no pope has ever met with a Russian patriarch.

“The Holy See and the Moscow Patriarchate hope that it will also be a sign of hope for all people of good will. They invite all Christians to pray fervently for God to bless this meeting, that it may bear good fruits,” the Rev. Federico Lombardi, the Vatican’s chief spokesman, told journalists.

Francis will be welcomed from the papal plane by Cuban President Raul Castro — whom he met during his visit to Cuba last September before coming to the U.S. — before the private meeting with Kirill, which will be held at the airport.

Accompanied by Russian and Spanish translators, the two religious leaders are expected to sign a joint declaration and make short statements; there will also be an exchange of gifts.

The chief impetus for the meeting — which was kept under wraps during two years of secret negotiations — appears to be concern over the persecution of Christians in the Middle East, which trumps even centuries-long suspicions between Moscow and Rome.

The last decade of upheaval and rising militancy has decimated Christian populations in the Middle East. It’s estimated that there are as few as 200,000 Christians in Iraq, remaining from a prewar population of 1.5 million.

In Syria, Christians figure prominently in the tide of refugees fleeing the armies of the so-called Islamic State and the al-Qaida-affiliated Nusra Front. Coptic Christians remain vulnerable in Egypt despite assurances of equal treatment by Egyptian President Abdel-Fattah el-Sissi.

At a press conference in Moscow on Friday, senior Orthodox cleric Metropolitan Hilarion said that long-standing differences between the two churches remain, most notably a row over the status of the Greek Ukranian Catholic Church in Ukraine, which follows Eastern rites but is loyal to Rome.

In fact, in announcing the pope-patriarch meeting, the Russian Patriarchate said in a statement that Ukraine remained a “bleeding wound.”

But Hilarion said these differences were being put aside so that Kirill and Francis could come together over persecution of Christians.

“The situation shaping up today in the Middle East, in North and Central Africa, and in some other regions where extremists are carrying out a genuine genocide of the Christian population, demands urgent measures and an even closer cooperation between the Christian churches,” Hilarion said, according to Reuters.

“We need to put aside internal disagreements at this tragic time and join efforts to save Christians in the regions where they are subject to the most atrocious persecution.”

The location of the meeting was chosen in part for its convenience; Kirill will already be in the country for an official visit, whereas the appointment is a short detour on Francis’ Mexico agenda.

But Cuba is also seen as neutral ground. It is a long-standing ally of Russia, and both Russian leader Vladimir Putin and the Russian Orthodox Church, which generally supports Putin and his nationalist aims, are deeply suspicious of appearing to defer to the West, which would include the Roman Catholic Church.

In fact, Kirill could face backlash among his own ranks for even agreeing to meet Francis. Until a few years ago, the Roman pontiff was known as “the Patriarch of the West” and church officials in Moscow have had to deny rumors that a formal reunification with Rome was imminent.

The Catholic-Orthodox summit in Havana will also come just months before the expected first joint meeting, or synod, of the various Orthodox churches in more than a thousand years. Differences between the Russian and other Orthodox leaders have complicated planning for the landmark gathering.

Cuba is also ideal for Francis because he helped broker a diplomatic breakthrough between Havana and Washington last year, and has highlighted the island as a “meeting place” between East and West.

“It’s a place that positioned itself well for the circumstances,” Lombardi told reporters.

The historic meeting is the result of two years of talks between the Vatican and Moscow, Lombardi said. Although there have been reports of warming relations during Francis’ papacy, the Vatican’s announcement Friday was widely unexpected.

Returning from a meeting with Bartholomew in Istanbul in November 2014, Francis said that he had previously spoken by phone with Kirill and had told the Russian church leader, “I’ll go wherever you want. You call me and I’ll go.”

Francis said then that “both of us want to meet and move forward,” but he noted it was at the height of international tensions over Russia’s intervention in Crimea and Ukraine.

“The poor man has so many issues there that the meeting with the pope has been put on the back burner,” the pope said, referring to Kirill and the Ukraine situation.

When Putin met Francis in the Vatican in June last year, it was widely seen as a sign of Russia’s re-emergence in the West.

The contents of the proposed joint declaration the two will sign in Havana was not immediately published and Lombardi would not say whether the Havana accord would be followed by a papal trip to Russia. That would also be a first.

Following the appointment, Francis will travel to Mexico City, where he is due to arrive later that evening. The papal tour will include a much-anticipated visit to Ciudad Juarez, a city on the U.S. border that has been hit by drug-related violence in recent years.

Francis will also celebrate Mass at the Basilica of Our Lady of Guadalupe, in Mexico City, and meet the indigenous community in San Cristobal de Las Casas in southern Mexico.