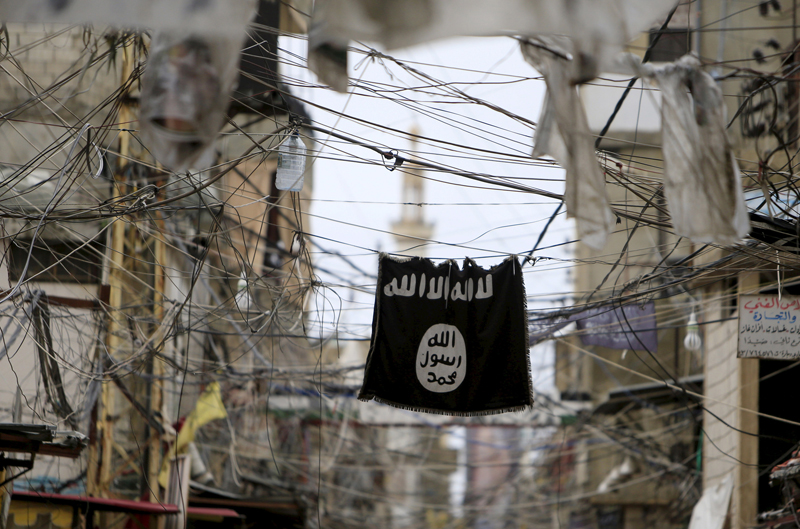 An Islamic State flag hangs amid electric wires over a street in Ain al-Hilweh Palestinian refugee camp, near the port-city of Sidon, southern Lebanon on January 19, 2016. Photo courtesy of REUTERS/Ali Hashisho

WASHINGTON —  The wife of a now-deceased Islamic State leader has been charged for her alleged role in last year’s death of American aid worker Kayla Jean Mueller.

Bahar, also known as Umm Sayyaf, “knew how Mueller was treated by Baghdadi when Mueller was held against her will in Sayyaf’s home,” federal prosecutors said when the charges were announced Monday (Feb. 8).

“The Sayyafs held young women who were sold or traded to ISIL men, and the women were characterized as being owned by the ISIL (another acronym for the Islamic State) men who acquired them,” the government documents allege. While Mueller, who was kidnapped in 2013 by ISIL soldiers, was being held with two other women, Umm Sayyaf allegedly threatened them, asserting that she would “kill them if they did not listen to her.”

Umm Sayyaf, now being held on terror-related charges in Iraq, allegedly admitted to FBI agents last summer that she was chiefly responsible for Mueller and other hostages while her husband traveled. On those occasions, she acknowledged hosting ISIL members and al-Baghdadi at her home.

“Sayyaf admitted that al-Baghdadi owned Mueller during her captivity at the Sayyaf residence and (she) admitted that owning is the equivalent of slavery,” prosecutors said.

“We fully support the Iraqi prosecution of Sayyaf and will continue to work with the authorities there to pursue our shared goal of holding Sayyaf accountable for her crimes,” Assistant Attorney General John Carlin said.

If convicted, Sayyaf faces a maximum penalty of life in prison.

News
‘I have to find the Mecca of my heart’: Muslims grieve as hajj is drastically limited
Coronavirus
Coronavirus restrictions on mosques bring women to the fore
Opinion
Ramadan in the quiet spaces
News
Ismaili TV-streaming platform launches in response to pandemic
News
Gift drive for the children of Muslim inmates seeks to serve the ‘hidden ummah’
© Copyright 2020, Religion News Service. All rights reserved. Use of and/or registration on any portion of this site constitutes acceptance of our User Agreement and Privacy Policy, Privacy Statement and Cookie Notice. The material on this site may not be reproduced, distributed, transmitted, cached or otherwise used, except with the prior written permission of Religion News Service.