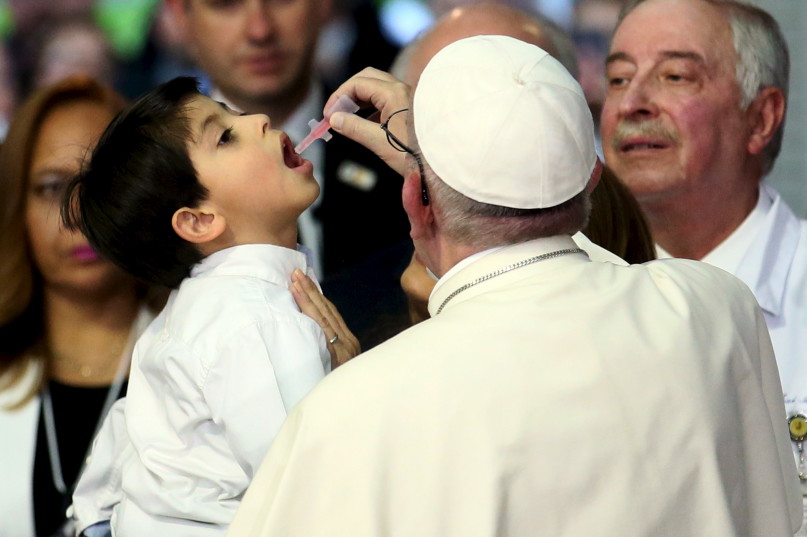 “It’s important to feel loved and cared for, and I say ‘Thank you’ to all the people who look for better ways to take care of us,” the pope said on Sunday (Feb. 14) as he visited the Federico Gomez Pediatric Hospital in Mexico City’s poor and crime-ravaged Doctores neighborhood.

Accompanied by Mexico’s first lady, Angelica Rivera, and Jose Narro, the country’s health minister, he met dozens of young patients, and talked about  “kindness therapy” as he praised “the efforts medical staff make towards (the children’s) rapid recovery.”

He even administered a polio vaccine to a young patient called Rodrigo, and was serenaded with a version of “Ave Maria” sung by 15-year-old cancer patient, Alexia Garduno.

During Saturday’s homily at Mexico City’s Metropolitan Cathedral, he compared the country’s drug war — which has left 100,000 people dead and a further 30,000 missing since 2006 — to a “devouring metastasis.” It was an apt description for a pontiff whose rhetoric often features medical metaphors, having called for the church to be a “field hospital” attending to spiritual casualties.

His broadsides against inequality and violence continued through to Sunday, when he gave Mass in the notoriously violent industrial of Ecatepec, in Mexico State, where almost 7,000 women have died or disappeared since 2005.

The estimated congregation of 300,000 heard the Pope excoriate “a society of the few and for the few, (with a) wealth that tastes of pain, bitterness, and suffering,” before envisioning a Mexico “where there will be no need to emigrate in order to dream, no need to be exploited in order to work.”

Oxfam estimates that Mexico’s richest 1 percent owns almost half of the country’s wealth, while the government figures indicate that 46 percent of the country’s 122 million citizens live below the poverty line — a proportion which has remained almost static since 1992.

The pope’s visit to Federico Gomez Hospital, however, was “a powerful expression of his evangelism and a respite from his focus on Mexico’s ills,” according to professor R. Andrew Chesnut, who teaches Catholic studies at Virginia Commonwealth University.

“For a man who doesn’t have kids himself, he was a real natural,” said Chesnut. “He seems naturally drawn to the energy and enthusiasm of young people.” 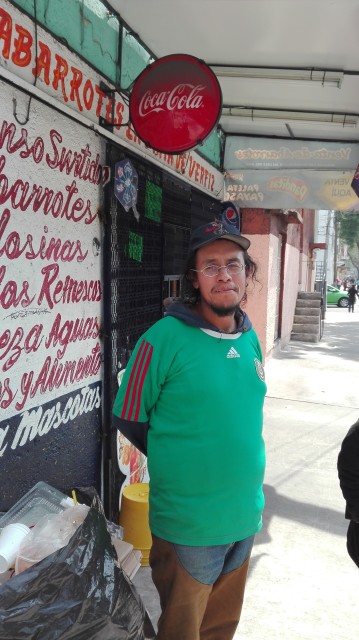 Street trader Guillermo Romero, 28, outside his home in Colonia Doctores, Mexico City, February 14, 2016. He says that security presence ahead of the pope’s visit to Federico Gomez Pediatric Hospital has prevented him from earning his weekly wage of $37 from selling cardboard and recyclable trash. RNS photo by Tim MacGabhann

For some of the staff, the visit to the hospital highlighted the critical issues facing Mexico’s public health system.

“Apart from giving the children hope, I see no benefit to Pope Francis coming here,” said Hugo Lopez, 36, a pediatric nurse with 17 years working in the public system, as he took a smoking break around the corner from Federico Gomez Hospital. “He says that Mexican children are the ‘wealth of the country,’ but Mexican children are getting sicker. I see more obesity and cancer now than ever, because pollution is higher and we can’t afford to feed our kids as well as before.”

Federico Gomez Hospital is, in part, a victim of its own success. The hospital’s specialist organ transplant center carries out an average of one kidney transplant per week, but the waiting list for liver transplants currently stands at 120. But for Lopez, that’s not even the biggest problem. For him, the country’s inequality extends even to health care.

“Most of the children we see are from poor backgrounds,” he explained. “Let’s say a child has cancer: Their family pays 800 pesos ($42) for each of the basic 14 sessions of a basic chemotherapy cycle. Let’s also say they’re from outside the state: You have travel expenses, parents losing income, and then, on top of that, basic medical studies. It’s sad to see this delicate issue politicized by the first lady.”

Since the hospital is located in the impoverished Doctores neighborhood, the pope’s visit also highlights the precariousness of the 30 million Mexicans living in the informal economy. Recent Labor Ministry figures suggest that six out of every 10 Mexican workers live in the informal economy, which knocks an estimated 4 percentage points off the country’s GDP every year.

Police were out in force in Doctores’ warrenlike streets on Sunday, clearing the massive tianguis, or open market stalls, which are its residents’ main source of income.

“I’m a Catholic, but I can’t get a sense of the pope’s visit,” said Guillermo Romero, 28, who makes 700 pesos ($37) per week selling cardboard and recyclable trash. “Not when I’m losing my week’s earnings. We’re not able to move around our own streets.”

“What are we going to eat this week?” asked his mother, Marta, 48. “The pope has taken the poor’s entire source of work this weekend. We are people who feed ourselves with what we can get.”

Other street traders have been able to take advantage of the pope’s visit. Luis Gibran Gonzalez, 23, cut a lively figure as he navigated the 40,000-strong crowd lining the Avenida Cuauhtemoc, outside Federico Gomez Hospital.

“I love the craft of selling,” he said, toting a bundle of plastic flags in the Vatican colors that depicted Pope Francis, and which he sold for 10 pesos. “Income-wise it’s variable, but if you like to sell, you don’t get stressed.”

Gonzalez hadn’t sold much at the Ecatepec Mass, where the high security presence impeded his patter, so he had raced ahead of the traffic out of the state to try to make up the shortfall outside the hospital. For his 13-hour day, he hoped to net 600 pesos ($32).

“I’m a big believer in customer service,” he said. “I try to be personable and efficient, and give the customer what they want.” Then, spying an opportunity, he was off again, springing across the pavement with his sales pitch at the ready.

(Tim MacGabhann is a contributor to RNS)