ABOARD THE PAPAL PLANE (Reuters) — Donald Trump is “not Christian” because of his views on immigration, Pope Francis said on his way back to Rome from Mexico.

The pope said, however, he did not want to advise American Catholics on whether or not to vote for Trump.

In a freewheeling conversation with reporters on the papal flight, Francis was asked about Trump and about whether Catholic women could use birth control to avoid having a baby with severe birth defects caused by the Zika virus now sweeping Central and South America. 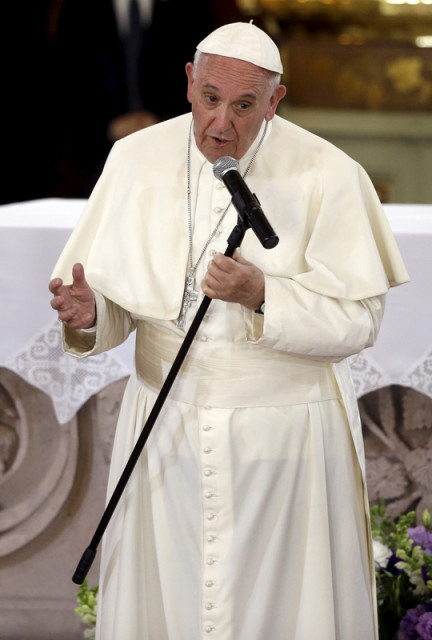 Pope Francis talks to the faithful inside the Cathedral in Morelia, Mexico, February 16, 2016. REUTERS/Gregorio Borgia/Pool – RTX279SM

Francis has appeared to open the door to a possible limited softening of the Roman Catholic Church’s ban on contraception because of the virus, which is being blamed for babies born with tiny heads that limit their brain capacity.

But the Argentine pontiff categorically ruled out abortion as a response to Zika, comparing the practice to a Mafia killing.

The press conference featured the same kind of straight talk that ran through his speeches in Mexico, where he ripped a culture of death and corruption and blamed government and capitalists for indifference to suffering by migrants and workers.

Francis dug into Trump’s vow to build a wall between the United States and Mexico if he becomes president.

“A person who thinks only about building walls, wherever they may be, and not building bridges, is not Christian,” Francis said in answer to a specific question about Trump’s views. “This is not in the gospel.”

Asked if American Catholics should vote for someone with Trump’s views, Francis said:

“I am not going to get involved in that. I say only that this man is not Christian if he has said things like that. We must see if he said things in that way and in this I give the benefit of the doubt.”

On his last day in Mexico, Francis said a Mass on the U.S. border, where he railed against immigration policies that force many underground and into the hands of drug gangs and human smugglers.

Trump has also said he would deport millions of illegal migrants if he wins the November U.S. election. Last week he told Fox Business television that Pope Francis did not understand the Mexican border issues.

“The pope is a very political person. I think he doesn’t understand the problems our country has. I don’t think he understands the danger of the open border that we have with Mexico,” he said.

Asked about being called a “political person,” Francis said: “Thank God he said I was a politician because Aristotle defined the human person as ‘animal politicus.’ So at least I am a human person.” 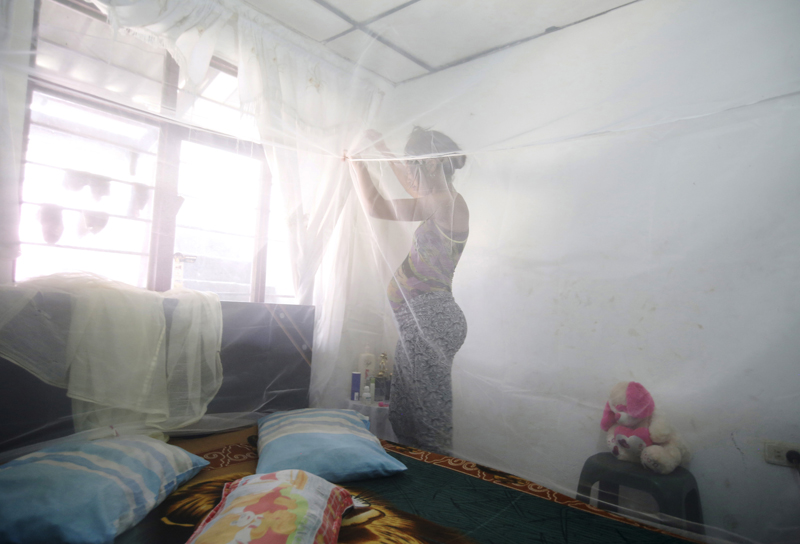 Maribel Gomez, 21, installs a mosquito net over her bed in Cali, Colombia, on Feb. 17, 2016. Municipal health authorities in Cali delivered mosquito nets to pregnant women and installed guppy fish bowls as a preventive measure against the Aedes aegypti mosquito, which is said to transmit the Zika virus. Photo courtesy of REUTERS/Jaime Saldarriaga

Francis was also put on the spot about whether the church needs to soften its teachings on abortion and contraception in Latin American in the face of the Zika health crisis.

Many scientists believe Zika, a mosquito-borne disease that is sweeping through the Americas, may be a risk factor for microcephaly in newborns.

The pope was asked if using contraception would fall into the category of the lesser of two evils and how he felt about some authorities advising pregnant women with Zika to have abortions.

He categorically ruled out that abortion would ever be permitted for pregnant women with Zika. “Abortion is not a lesser evil. It is a crime. It is killing one person to save another. It is what the Mafia does,” Francis said, speaking passionately against the practice. “It is a crime. It is an absolute evil.”

But Francis mentioned in his response that one of his predecessors, Pope Paul VI, had issued an exceptional dispensation allowing nuns in Africa to use the birth control pill because they risked being raped during a conflict there.

He said Paul, who reigned from 1963 to 1978, had responded to “a difficult situation in Africa,” suggesting that a papal precedent existed.

Francis did not say exactly when his predecessor made the exception, but it was believed to be in the 1960s in what was then the Belgian Congo. Little is known of the episode, which was not publicized at the time.

Francis said that unlike abortion, “avoiding pregnancy is not an absolute evil” and added that “in certain cases,” such as the precedent set by Paul VI regarding the nuns in Africa, using contraception might be the “lesser evil.”

He did not elaborate.

Paul VI confirmed the Roman Catholic ban on artificial birth control in his major 1968 encyclical “Humanae Vitae” (On Human Life), which ran into strong opposition in some parts of the church.

In Francis’ comments on Zika, he also urged the medical and scientific communities to do everything possible to find out more about the disease.

“I would also like to exhort doctors to do everything to find vaccines against the mosquitoes that bear this illness. We have to work on that,” he said.

At other points in conversation with media, the pope reiterated that he would “really like” to visit China.

The pope also pointed to a possible high-profile interreligious meeting, saying he would like to meet the grand imam of al-Azhar, Ahmed al-Tayeb, a prominent Sunni Muslim cleric based in Cairo. Francis said it would be up to Cardinal Jean-Louis Tauran, president of the Vatican’s Pontifical Council for Interreligious Dialogue, to arrange the meeting.