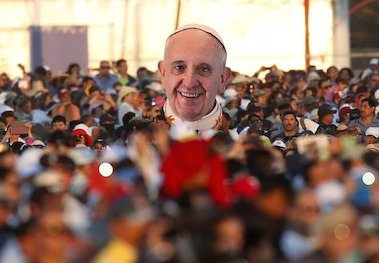 CIUDAD JUAREZ, Mexico (Reuters) – Pope Francis on Wednesday railed against immigration policies that force many underground and into the hands of drug gangs and human smugglers, praying at Mexico’s border with the United States in what was once one of the world’s deadliest cities.

He walked up a ramp lined with flowers to a cross erected in Ciudad Juarez in memory of migrants who have perished trying to reach the United States just a stone’s throw away.

There he blessed three small crosses which will be sent to the dioceses of El Paso, Ciudad Juarez and Las Cruces, New Mexico. Shoes of migrants who died were laid beside them.

Overlooking the Rio Grande that separates the two countries, it was the closest the pope came to the U.S. border during his six-day visit to Mexico.

He then celebrated Mass just 80 yards (73 meters) from the border crossing in a fairground, connected via video link to faithful gathered at a university stadium in El Paso.

“We cannot deny the humanitarian crisis,” the pope said shortly before he wrapped up his six-day visit to Mexico and took off for Rome. “Each step, a journey laden with grave injustices: the enslaved, the imprisoned and extorted; so many of these brothers and sisters of ours are the consequence of trafficking in human beings.”

“Injustice is radicalized in the young; they are ‘cannon fodder’, persecuted and threatened when they try to flee the spiral of violence and the hell of drugs. Then there are the many women unjustly robbed of their lives,” he added.

A major manufacturing center, the gritty industrial city of Ciudad Juarez has been hammered by drug violence in recent years. It also an important crossing for Mexicans, Central Americans and Asians trying to reach the United States illegally.

Most in Ciudad Juarez are of modest means. Business leaders in the city say about 70 percent of people in the city, a major low-cost manufacturing center, earn less than 210 pesos (11 USD) a day. The official minimum wage in Mexico is 73 pesos per day.

The pope’s focus on the plight of migrants who risk murder, rape and extortion as they head north, comes as the number of Central American children and families apprehended at the border rises, in a spike reminiscent of a 2014 flood of migrants that created a major political headache for U.S. President Barack Obama.

Immigration reform remains one of the most divisive issues in U.S. politics, and a key theme in the 2016 presidential vote.

The pope’s stance is starkly at odds with the anti-immigrant rhetoric of candidates for the 2016 Republican U.S. presidential nomination.

Billionaire Donald Trump has surged ahead of his rivals with his message that Mexico is “killing” the United States with cheap labor, while sending over criminals and rapists. He has also promised to build a huge border wall.

Trump last week dubbed the pope “a very political person,” saying he believed the Mexican government had put him up to the border visit.

“To suggest that the pope is an instrument of the Mexican government, no. That is very strange indeed,” said Father Federico Lombardi, the Vatican spokesman, shortly before the pontiff arrived in Ciudad Juarez.

“The pope always speaks of the problems of immigration. If Mr. Trump were to come to Europe he would see that the pope has said the same things about immigration to the Italians, the Germans, the French and the Hungarians.”

Tens of thousands of people crossed over the border from El Paso, Texas, to hear the pope, though that was far fewer than expected.

Earlier on Wednesday, the pope issued a scathing critique of capitalism, saying that God will hold accountable “slave drivers” who exploit workers.

“The flow of capital cannot decide the flow of people,” the Argentine pontiff said, denouncing “the exploitation of employees as if they were objects to be used and discarded.”

“God will hold the slave drivers of our days accountable,” he said.

The pope has in the past called money “the dung of the devil” and has decried what he calls the “evils” of unbridled capitalism, prompting criticism from U.S. business leaders.

He has visited some of the most marginalized areas of Mexico, urging young people in the violence-ridden state of Michoacan to avoid drug trafficking and taking a swipe at the country’s rich and corrupt.

Earlier in the day, it emerged that a laser beam was pointed at his plane as he landed in Mexico City last week, though there was no harm to those aboard.