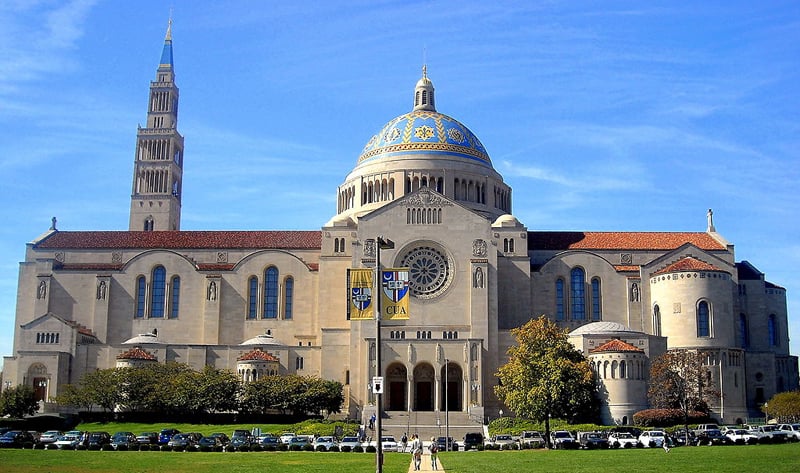 The Basilica of the National Shrine of the Immaculate Conception located on The Catholic University of America campus in Washington, D.C.
February 19, 2016
Kimberly Winston

"A Burial At Ornans" is a mid-19th century painting Gustave Courbet. PD-Art.

(RNS) Supreme Court Justice Antonin Scalia's funeral will be held Saturday (Feb. 20) at 11 a.m. at the Basilica of the National Shrine of the Immaculate Conception, the largest Catholic church in the U.S. What can we expect from a Catholic funeral? Will there be a eulogy? A Mass? Let us 'Splain . . . .

Q: What does a Catholic funeral consist of?

A: A Catholic funeral has three parts, which generally take place over at least two days. First comes the "Vigil for the Deceased," where friends and family gather before the funeral and burial to pray, offer condolences and recite as a group at least one decade, or section, of the rosary. In Catholicism, this is the time for a eulogy or other speeches about the deceased. Scalia's vigil is not public. Instead, the public can view his body as it lies in repose at the Supreme Court on Friday.

A day or two later comes the funeral Mass, among the most sacred rites of Catholicism. It is not a memorial or celebratory service, but is a service of worship with the focus on God and his acceptance of the deceased. It always takes place in a church. More on the funeral Mass later.

Last comes the "Rite of Committal," held at the burial site. Catholics believe in a bodily resurrection, so they frown on cremation. Scalia's committal will be private. It will likely be a time of prayer and blessing for both the deceased and his family and mourners. Of the Rite of Committal, the U.S. Conference of Catholic Bishops says, "the deceased passes with the farewell prayers of the community of believers into the welcoming company of those who need faith no longer, but see God face-to-face."

Q: What will happen at Scalia's actual funeral?

A: The American flag that will drape Scalia's coffin during its lying in state at the Supreme Court will be removed before the casket enters the shrine. A priest will meet the coffin at the front door and sprinkle it with holy water. It will then be draped in a white cloth, or "funeral pall," intended to invoke the purity symbolized by the white garment of baptism. As the coffin is carried to the front of the church, a friend or family member may carry a crucifix, a Bible or a rosary in the procession and place them on top of the coffin.

Look for the priest to wear a vestment with a color that symbolizes hope -- violet or white are likely. Scalia will be commended to the mercy of God and everyone will be asked to pray for him and his family. There will be one or two Bible readings -- extrabiblical readings are not allowed. Music is very important in a Catholic funeral, and Scalia was a great fan of sacred music. Look for the selections to reflect his favorites, but stay within the selections approved by the church. "Ave Maria," by Bach or Schubert, is a good bet.

During the funeral, the priest will deliver a homily, or short sermon. He will celebrate the Eucharist -- the breaking of the sacramental bread and the pouring of the sacramental wine performed by Jesus at the Last Supper. Only baptized Catholics may join the priest in the Eucharist -- non-Catholics may be invited forward for a blessing of some kind. There will not be a "kiss of peace" -- a greeting among parishioners that is part of a regular Mass. As the coffin proceeds out of the church, the funeral pall may be removed and the American flag can then take its place.

Q: What symbols and rituals are likely to be seen at Scalia's funeral?

A: Some of the most interesting symbols and rituals at Scalia's funeral are likely to be displayed while he lies in repose in the Supreme Court. His pallbearers -- those who carry his coffin up the steps of the Court Friday morning -- are likely to be his former law clerks. No word yet if they will be the same pallbearers at the basilica on Saturday. Inside the court, his coffin will likely rest on the Lincoln catafalque -- the platform that held President Abraham Lincoln's coffin as he rested in state in the Capitol. Supreme Court Justices William Rehnquist, Salmon Chase, Earl Warren, Thurgood Marshall, Warren Burger and William Brennan all received the same honor.

Q: The big question: Will there be a eulogy during Scalia's funeral? Gov. Mario Cuomo's Catholic funeral in 2015 contained a 40-minute eulogy by his son.

A: Wait and see. The official Catholic guidelines, published in 1989, are this: “At funeral Masses there should usually be a short homily, but to the exclusion of a funeral eulogy of any kind.” But there's a loophole: “A member or friend of the family may speak in remembrance of the deceased before the final commendation begins.”

Whether an admirer of the sharp jurist, who loved to have the last word, will take advantage of this loophole remains to be seen.