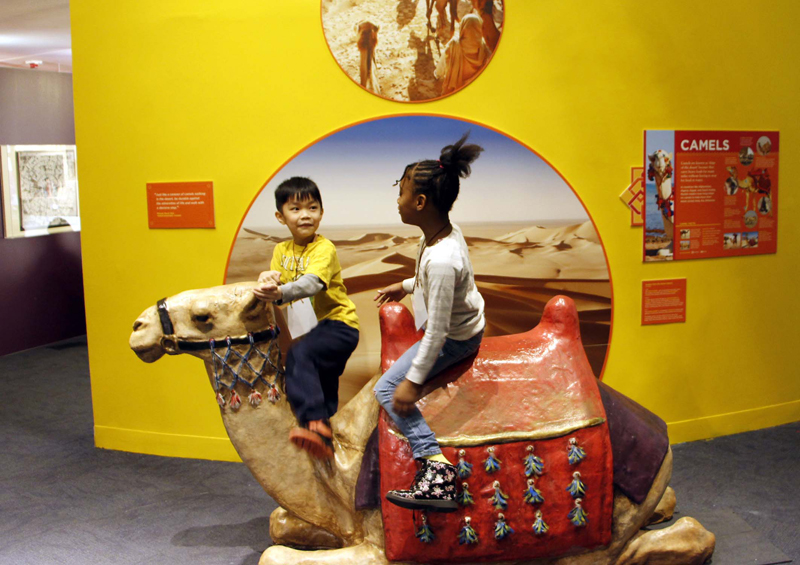 Children enjoying a ride on a life-size camel in the Trade Routes area of the "America to Zanzibar: Muslim Cultures Near and Far" exhibit at the Children's Museum of Manhattan. Photo courtesy of Aoommie Photography
February 23, 2016
Lauren Markoe

(RNS) A first-of-its-kind exhibit is introducing young museum-goers to Muslim cultures around the world.

The Children's Museum of Manhattan opened "America to Zanzibar" earlier this month, a 3,000-square-foot, interactive exhibit that invites kids to explore Muslim cultures across the world. Visitors can design buildings inspired by Islamic architecture, walk through a pretend Muslim-American home furnished with art and other objects donated by Muslim families and climb a life-size camel in a pretend journey across the desert.

The exhibit winds through a courtyard decorated with verses by Muslim poets and an art gallery featuring contemporary works by Muslim-Americans.

“New York City’s Muslim residents make up a vital part of our city’s rich and diverse communities and we’re proud to have this exhibit in one of our city’s important cultural resources,” said New York Mayor Bill de Blasio. “With America to Zanzibar, children will have the chance to learn about Muslim cultures in an engaging and thoughtful way."

The exhibit, five years in the making, is funded by the the National Endowment for the Humanities and the Doris Duke Foundation for Islamic Art, among others. It will also feature a host of festivals and live performances during its more than yearlong stay. It will then travel to other parts of the nation.

Children enjoying a ride on a life-size camel in the Trade Routes area of the "America to Zanzibar: Muslim Cultures Near and Far" exhibit at the Children's Museum of Manhattan. Photo courtesy of Aoommie Photography

(Lauren Markoe is a national correspondent for Religion News Service)

September 3, 2020
Related Posts
By Caitlin Yoshiko Kandil
'I have to find the Mecca of my heart': Muslims grieve as hajj is drastically limited
By Hind Makki
Coronavirus restrictions on mosques bring women to the fore
By Ruth Nasrullah
Ramadan in the quiet spaces
By Aysha Khan
Ismaili TV-streaming platform launches in response to pandemic
By Aysha Khan
Gift drive for the children of Muslim inmates seeks to serve the ‘hidden ummah’