(RNS) A leading Canadian Catholic churchman has said that a person who plans to die through assisted suicide can be denied last rites by a priest, a view that may spark debate as assisted suicide laws proliferate and pastors are presented with a new moral quandary.

The bottom line, said Ottawa Archbishop Terrence Prendergast, is that a Catholic who requests assistance in dying “lacks the proper disposition for the anointing of the sick,” as the sacrament is formally known.

“Asking to be killed is gravely disordered and is a rejection of the hope that the rite calls for and tries to bring into the situation,” Prendergast said in an interview with Canadian Catholic News published Feb. 18.

Moreover, he said, “Asking your priest to be present to something that is in direct contradiction to our Catholic values is not fair to the pastor.” 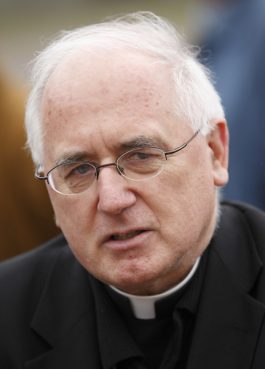 In January, the Supreme Court of Canada ruled that physician-assisted suicide should be allowed across the country under certain circumstances while giving the federal government four more months to come up with a national law governing the practice, which the Catholic Church strongly opposes.

The issue continued to percolate after a government report published Feb. 25 proposed that the mentally ill and consenting minors should also be allowed to choose physician-assisted suicide.

The report also recommended that all publicly funded health care institutions provide assisted suicide. That could put the hierarchy on a collision course with Parliament because it would include most church-run hospitals, hospices and nursing homes.

Prendergast said a priest should always visit a sick or dying person if his presence is requested, and pray for the person or try to dissuade them from assisted suicide, the news service reported.

But he said withholding the sacrament that prepares a person for the afterlife and confers a final forgiveness of sins can be a pastoral way to help people realize the gravity of their decision.

“The rite is for people who are gravely ill or labor under the burden of years and it contains the forgiveness of sins as part of the rite,” Prendergast said. “But we cannot be forgiven preemptively for something we are going to do — like ask for assisted suicide when suicide is a grave sin.”

Other Canadian bishops have recognized the pastoral dilemma of physician-assisted suicide but have not explicitly said that a person in those circumstances should be denied last rites.

“Somebody comes to you and says, ‘Tomorrow I’m going to get the needle and I would like the sacrament of the sick.’ How are we going to handle those kinds of questions?” Bishop Douglas Crosby of Hamilton Ontario, and president of the Canadian Conference of Catholic Bishops, told Michael Swan, associate editor of The Catholic Register.

Added Montreal Archbishop Christian Lepine: “When someone asks for the presence of a priest, whatever the situation, you always say yes.”

He compared it to seeing someone ready to jump to their death from a bridge and rushing to talk them out of it.