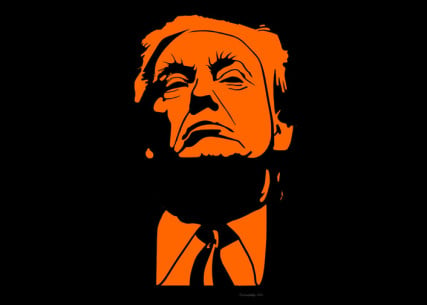 Why are so many religious conservatives backing Donald Trump? Trump may not be the model of religious faithfulness and virtue, but he may appeal to those who value leadership and authority.

Political scientists and psychologists are finding that Trump seems to be tapping into an authoritarian personality trait that exists in a large subset of the population. Authoritarians seek strong, powerful leadership and fear many so-called “out groups” (such as racial minorities).

Along with my colleagues Paul Djupe (Dennison University) and Brian Calfano (Missouri State University), I conducted a survey of clergy. To tap into religious authoritarian values, we asked them how much they agreed with a number of statements regarding how religious congregations should be structured and led.

One of the most commonly used authoritarianism is based on how people viewed the goal of child rearing. Do they think it is more important for children to be raised to be obedient or to think for themselves? We gave clergy three pairs of goals and asked them to tell us which one is more important:

Together, these items give us a scale to see how important authority is compared to independence. 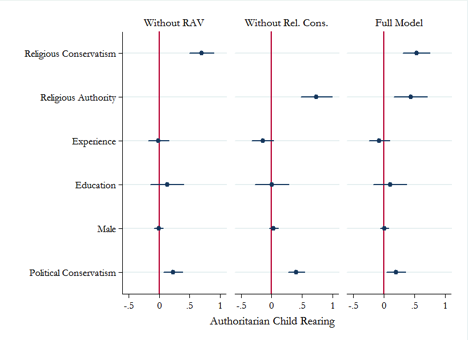 I crunched the numbers and found that clergy who believe in religious authority also prioritize raising children to be obedient and respectful as opposed to independent and curious.

(For details on interpreting the figures, see the geek note at the end of the post)

An additional battery of questions was posed that assessed how committed clergy were to deliberation in their congregation. Clergy either had to agree or disagree with five statements.

A similar set of questions were asked that tried to understand how much clergy support foundational democratic principles. The four statements were: 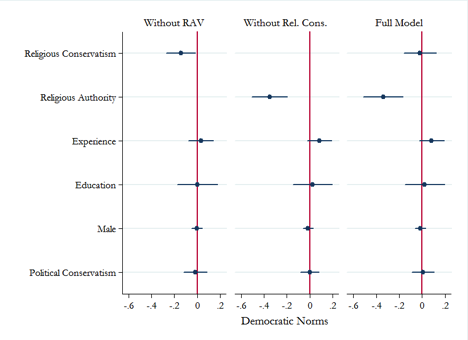 Many observers have noted that the Trump voters are authoritarians. They seek a strong leader who punishes opposition and speaks with impunity. It seems that this same phenomenon may exist in Christian churches. Clergy who have a strong view of religious authority seem to be less willing to allow for true discussion to occur in their congregations, possibly because it could undermine their authority as spiritual leaders.

Religious authoritarians seemed to be less convinced that democracy functions best when many views can be presented. It’s impossible to know if religion accelerates authoritarianism or has no effect on it, but it seems that a certain subset of Christians seem to believe in and seek out strong leaders like Trump.

The survey was drawn from the Southern Baptist Convention, the United Methodist Church, the Reformed Church in America, the Presbyterian Church (USA), and clergy from the Greek Orthodox Church.

I am displaying the results of regression in visual form. The dot is the average difference between those with the characteristic and those without it.This difference takes into account other factors listed (e.g., education and religious conservatism).So, if the dot for religious authority is to the right of the line, then a person with a strong belief in religious authority has a higher value even after considering all of the factors listed.  If both the dot and line don’t intersect with zero there is a statistically valid effect. If the dot is to the right of the vertical line it means that the variable predicts an increase, if it’s below it decreases the effect. I ran a model with just religious authority, one with just religious conservatism and then a combined model while including some control variables.

Ryan Burge @ryanburge researches religion and politics. He is currently studying the politics of the emerging church movement.