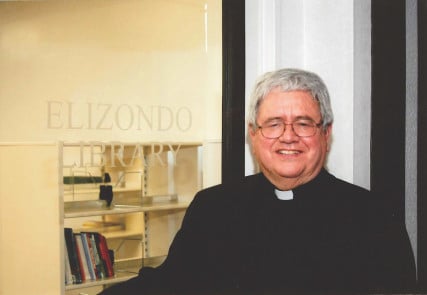 Photo of the Rev. Virgilio Elizondo, who died on March 14, 2016, courtesy of the Archdiocese of San Antonio

(RNS) The Rev. Virgilio Elizondo, a Mexican-American Catholic priest described as “the father of U.S. Latino religious thought,” has died, reportedly by suicide, nearly a year after he was accused in a lawsuit of sexually abusing a boy 30 years ago.

Elizondo, a native of San Antonio who taught at the University of Notre Dame, was found dead in San Antonio on Monday (March 14), according to authorities and media reports.

No official cause of death was given, though several reports on Tuesday cited church sources saying Elizondo had died of a self-inflicted gunshot wound.

San Antonio police also confirmed to local media that they had responded to a report of a shooting at Elizondo’s home at 1:55pm local time and that the priest was pronounced dead less than 10 minutes later.

Elizondo’s longtime friend and administrative assistant, Janie Dillard, told the San Antonio Express-News that the priest, who was 80, “died of a broken heart.”

San Antonio Archbishop Gustavo García-Siller said in a statement that he was “stunned by the news” of Elizondo’s death, which he said was “an occasion for great sorrow, as his death was sudden and unexpected.”

Elizondo had been accused in a lawsuit filed in Bexar County last May of sexually abusing an unidentified boy who had come to him 30 years ago to report abuse at the hands of another priest.

Elizondo denied the allegation and vowed to prove his innocence.

“It could never be (true),” Dillard told the San Antonio newspaper, which reported the news late Monday as word of Elizondo’s death and possible suicide began circulating through Catholic circles from Texas to Notre Dame.

A Catholic News Service story last year on the accusations against Elizondo said that the professor of pastoral and Hispanic theology at Notre Dame was “the foremost interpreter of U.S. Latino religion by the national and international media.”

But Elizondo was more than an academic and well-known author.

The son of Mexican immigrants, he worked on behalf of underpaid Mexican-American laborers in the San Antonio archdiocese during the early 1970s, and he founded the Mexican American Cultural Center for pastoral leaders from the United States and Latin America to study.

As CNS reported, when he was pastor of the San Fernando Cathedral in San Antonio he presided over a Spanish Mass that was broadcast to more than 1 million households.

News
How a podcast is helping this Catholic and gay Latino man break the stigma
Signs of the Times
Pope’s new book speaks to Americans on racism, immigration and gender equity
News
A blue surprise? As Arizona trends toward Biden, Latino voters stand out
Signs of the Times
Worse than bungling, McCarrick report shows Vatican failed to take abuse seriously
Opinion
Joe Biden will remove the ‘bully’ from the bully pulpit