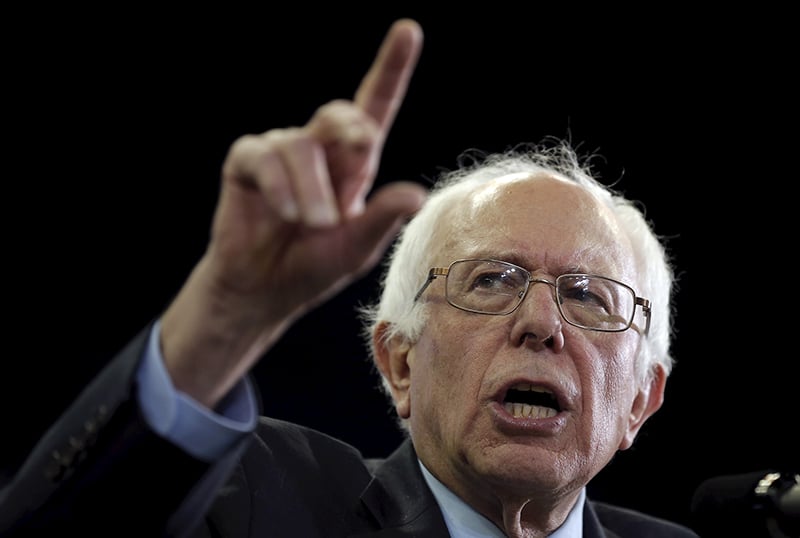 U.S. Democratic presidential candidate Bernie Sanders speaks at a campaign rally in Ypsilanti, Michigan, United States, on February 15, 2016. Photo courtesy of REUTERS/Jim Young *Editors: This photo may only be republished with RNS-GUROCK-COLUMN, originally transmitted on Feb. 16, 2016, and with RNS-CAMOSY-COLUMN, originally transmitted on April 18, 2016.
March 18, 2016
David Gibson

(RNS) Bernie Sanders is the only Jewish candidate in the presidential field of two Democrats and three Republicans, and he will also be the only one not addressing next week's annual meeting of the American Israel Public Affairs Committee.

But unlike the 40 or so rabbis planning to boycott the AIPAC conference over the appearance on Monday of top GOP contender Donald Trump, Sanders said he couldn't come because of a scheduling conflict.

“I would very much have enjoyed speaking at the AIPAC conference,” Sanders said in a letter sent Friday (March 18) to AIPAC head Robert Cohen.

“Obviously, issues impacting Israel and the Middle East are of the utmost importance to me, to our country and to the world,” said Sanders, the lone Democratic challenger to Hillary Clinton.

But Sanders said he was going to be campaigning out West and would have to send a printed copy of his remarks to the 18,000 attendees because AIPAC will not allow speakers to address the Washington conference by video link.

RELATED STORY: Trump is speaking at AIPAC. How should Jews respond?

The Jewish Telegraphic Agency, which first reported on Sanders' letter, noted that AIPAC, a leading pro-Israel organization, has allowed presidential candidates to deliver speeches remotely in past elections -- most recently in 2012 when Mitt Romney spoke via satellite.

Related Posts
By A. James Rudin
After 75 years, a question about race haunts Truman's calculation on Hiroshima
By Aysha Khan
Muslim Democratic delegates reject party platform over aid for Israel, Iran sanctions
By Jeffrey Salkin
Seth Rogen's snarky arguments about Israel actually have a long history
By Amy Klein
What good is faith when your fertility treatments aren't working?
By Brandon W. Hawk
Stella Immanuel's theories about demons, illness and sex have a long history