Donald Trump’s candidacy is dividing Americans, but it’s not based on ideology. Americans actually view Trump as relatively moderate. It’s about how people feel: Trump is splitting Republicans and driving away Democrats who no longer feel close to him. This is the finding from the American National Election Study 2016 pilot survey. The rigorous national survey asked people to place themselves on an ideological scale from “very liberal” to “very conservative.” The average American (not surprisingly) was about the midpoint of “neither liberal or conservative.”

(Note: Bernie Sanders and John Kasich weren’t included in the list of candidates—more on Sanders below)

Trump’s relatively moderate position stood up even when taking ideological vantage points. The typical liberal (self-placement left of the midpoint) places themselves as “somewhat liberal” and views all the candidates to the right. While Trump and Cruz are viewed as further to the right by liberals, but the order is the same. Clinton. Trump. Cruz.

The same goes for those placing themselves to the right. Conservatives view Clinton as further left; see Cruz and Trump to their left; but have the same order. Trump is the more moderate candidate. 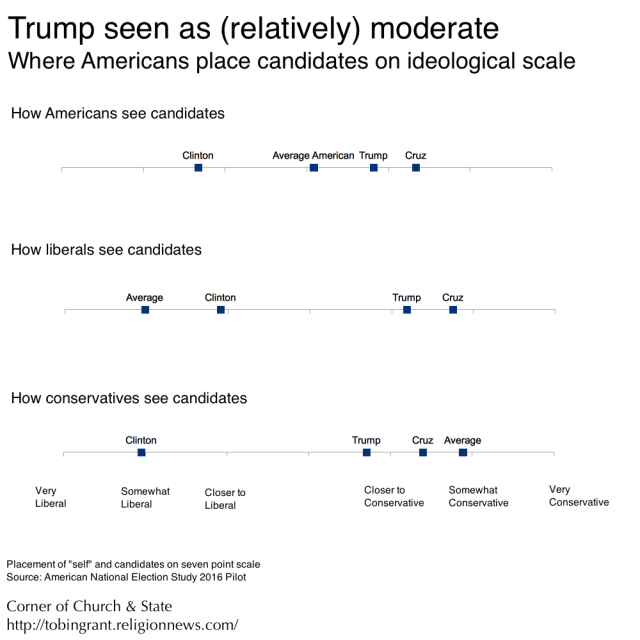 This graphic is not offered for republication

Bernie Sanders wasn’t included in the list of candidates, but we can shoehorn in a score for him. Based on some measures of how much people liked candidates, we can compare the self-placement of the typical “fan” of each candidate (a “fan” scored a candidate higher than 75 on 100-point feeling thermometer).

So, whether the vantage point is the left, right, or center, Trump is seen as a relatively moderate candidate. 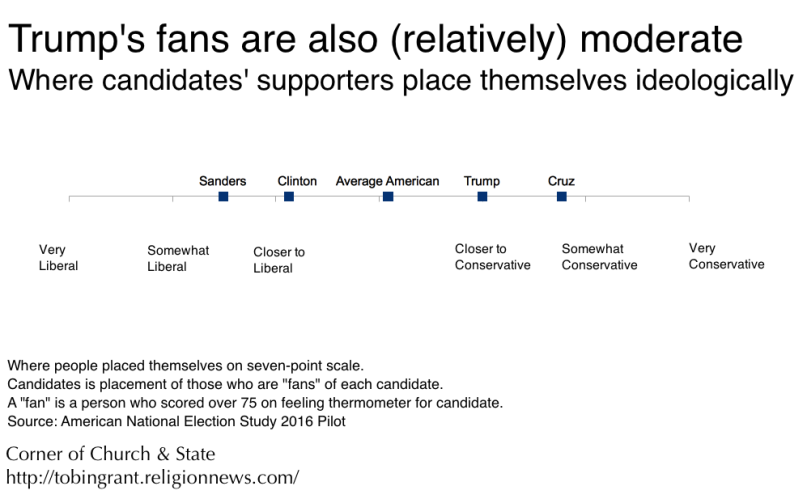 I have two hunches for why Trump is viewed as more moderate. One possibility is that his mix of policy positions are, in fact, relatively moderate. His protectionist economic policies are arguably closer to Sanders than any Republican candidate. He takes the conservative positions on abortion, marriage, and other social issues of the religious right, but these are (at best) the result of a recent conversion (pun-intended). A second possibility is that his lack of clear positions on many issues leaves voters without enough information to place him; so, they color him in with their own views.

The relatively moderate placement of Trump does not mean that he isn’t dividing Americans. He is. But he isn’t polarizing because of his issue positions, per se. At the risk of starting an argument with political psychologists, I’ll say that is splitting American politics emotionally. People simply don’t feel close to Trump.

The ANES and other surveys ask people to rate candidates and other groups using a “feeling thermometer.” Candidates are rated on a hundred-point scale from zero (very cool) to one-hundred (very close). Using these Keith Poole, Howard Rosenthal, and Christopher Hare at the VoteView blog created a map for where Americans, candidates, and groups are relative to each other (for more on how this is done, see this explanation).

In 2015, the map looks like it should in a typical election year. Republicans together on the right. Democrats on the left. There were many Democrats who felt closer to Trump than to Obama or Clinton.

But as the campaign has progressed, Trump has polarized Americans. In the ANES survey, voters are dividing between those who are closest to Trump (upper-right) and everyone else. Among Republicans, there are now two groups of voters: those closer to Trump (and to a lesser extent Cruz) and those closer to Jeb Bush and Marco Rubio. These Republicans do not feel close to the Democratic candidates, but they also feel distant from Trump.

Trump is also polarizing the Democrats. There are no longer Democrats who feel close to Trump. There is now a chasm between Trump-Republicans and Democrats. The Democrats differ on their feelings toward Sanders and Clinton, but this difference is not dividing the party. It appears to be a cohesive coalition that has even drawn in some Republicans in response to Trump.

The real question is what happens next. Is this a one-off election? Or is the meaning of being “left” and “right” going to change so that Trump’s mix of issue positions becomes the new meaning of “conservative” and “Republican”? If it is, then how voters feel toward Trump would change how they view Trump ideologically.