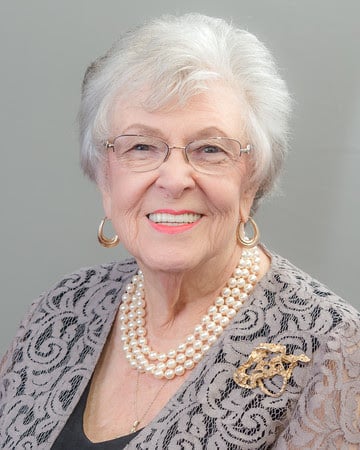 (RNS) The Rev. Joan Brown Campbell, the first clergywoman to lead the National Council of Churches and to direct the U.S. office of the World Council of Churches, received an award on April 2 from the Religion Communicators Council. Campbell, 84, who is ordained in the Christian Church (Disciples of Christ) and American Baptist Churches USA, talked with RNS about her decades of ministry.

Q: You have lived through sea changes in women’s rights, civil rights and church relations. Is it still difficult for clergywomen to reach leadership positions?

A: I think it’s still difficult. I don’t think it’s nearly as difficult. What happened in the beginning was women would get their education and then they would be assigned to rather small churches, often in rural places. To have Riverside Church hire somebody, to have the Episcopal Church be headed by a woman, you can go through the list. But it still is something that is out of the ordinary.

Q: Orthodox priests had to figure out how to seat you when you met with them and you had a closed-door meeting with Billy Graham — who rarely met alone with a woman. How did you deal with male clergy?

A: I think that my own style, which some people took issue with, is not one of trying to make the other side the enemy as much as it is to see what the barriers are and see if you can climb across those barriers and then that will be a major victory and it opens doors for other people. 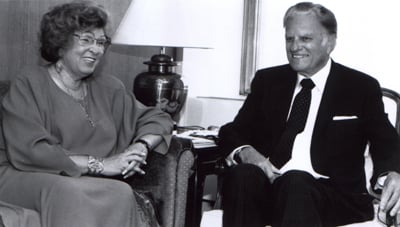 On the eve of a New Jersey crusade, Billy Graham addressed staffers at the Interchurch Center in New York in 1991. He is pictured here with the Rev. Joan Campbell, general secretary of the National Council of Churches. Religion News Service file photo

Q: Monday was the anniversary of the assassination of the Rev. Martin Luther King Jr. What do you remember about him?

A: My encounter with Martin Luther King was in Cleveland, Ohio. One day, Dr. King said to me, “You know I’ve been to every black church in Cleveland but I’ve never been invited to a white church.” And I, being naive and a 30-year-old, said, “Well, I think you could come to our church.”

Little did I know it was the beginning of who I am today. I had no idea that there would be people in the church, wealthy people, people with influence, who wanted to do anything but have Martin Luther King and they tried their best to keep him from being at the church. He finally did speak there but he spoke outside on the steps of the church and there were at least 3,000 people there to hear him and that would have never been true had it been inside the church.

Q: What was it like to mediate between people of very different perspectives, such as Cuban leader Fidel Castro and President Bill Clinton in 1999 about the return of then 6-year-old Elian Gonzalez to Cuba?

A: You can come to appreciate something about the people. You may not agree with all of the positions that they take in everything. To have been general secretary of the National Council of Churches in my whole life was the most rewarding and the most difficult job that I ever had. We had, when I was there, 39 different denominations, and if anyone thinks that because they’re Protestant and Orthodox that everybody got along, the fact is the differences were quite large. The National Council of Churches gave me the gift of dealing with difference and helping to respect the difference and still be able to make decisions so that the whole could succeed.

Q: You are supporting the creation of an interfaith center in Cuba. What would that look like?

A: The (Matanzas) seminary in Cuba is beginning to talk about creating an interfaith center, purchasing a building and having a place for classes and for people of different faiths to come together. This is very new to Cuba. They’re beginning to see that the world of the future is really an interfaith world and it doesn’t mean that they will go back on their Christian teachings. I will chair the committee that will try to raise the resources to put it together. It will be very much a part of what I have to do in my last whatever years you have after 85.

Q: With the continuing rise of the so-called nones, do you worry about the future of the institutional church?

A: I get mixed between worrying about it and hoping for a brand-new future. If you go to the baptism of a baby and if you have a grandmother and grandfather and an aunt or an uncle, you probably are going to have four denominations represented in the family that is baptizing that baby and one of them is going to be Catholic. It is an ecumenical world. The ecumenical task of the future is, in fact, to talk about ecumenical congregations.

Q: Your book “Living Into Hope” reviewed the lessons you’ve learned throughout your life. What have you learned?

A: The best way to live your life is to live what you believe to the degree that you can and where possible — this is the hard one — to try to live with differences but also be willing to challenge them when any of those differences hurt God’s people, which by the way, is all people. I don’t want anybody to hear that as only people that are people of faith. That’s everybody.

(The Rev. Joan Brown Campbell is a member of RNS’ advisory board. Adelle M. Banks is production editor and a national reporter for RNS) 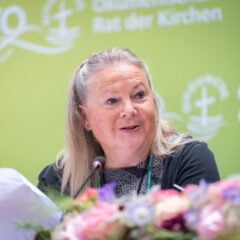 News
Will the World Council of Churches expel Kirill? We talk with Bishop Mary Ann Swenson