One of the biggest hurdles to believing the Bible is the content of the first testament. Though many conservatives claim that the Christian scriptures teach only one model for marriage—one man and one woman for life—the truth is not so simple.

A standard modern baseline for sexual contact among both believers and the non-religious—mutual consent—is never considered. Young women are coerced to marry or sold into marriage by their parents with regularity. The book of Numbers, for example, records God commanding Israelite soldiers to marry conquered virgins (while slaughtering everyone else, including children). And while polygamous and incestuous relationships are not explicitly celebrated, they are regulated by Israel’s God-given laws. The most prominent polygamous relationships are blessed by God with children and financial gain.

These passages are deeply troubling, and despite the wishful thinking of some Christians, are difficult to reason away. But Dr. David Lamb does his best to contextualize and explain these matters in Prostitutes and Polygamists: A Look at Love, Old Testament Style. He holds degrees from Stanford and Oxford Universities and is professor of Old Testament at Biblical Theological Seminary. Here we discuss how he deals with the strange sexual standards found in much of the Bible.

DL: Culture plays a huge role in biblical interpretation. A person from the Old Testament would be shocked at how inhospitable most people are in the West. We don’t know our neighbors, and we don’t invite anyone who rings our doorbell to join us for a meal or stay overnight. When it comes to their expectations of hospitality, we would appear to them to be barbarians.

We want our actions to be evaluated not based on ancient values of hospitality, but on how we treat people and love them in our own context. We need to do the same to the characters in the Old Testament.  As we do our homework on culture, the problems in the Old Testament don’t disappear, but they become less problematic as we gain insight into why God does what he does.

RNS: Abraham was a polygamist and David was an adulterer, murderer, and possible rapist. Yet the Bible calls these men “righteous.” What am I missing here?

DL: Abraham and David were both deeply flawed individuals. Abraham lied to Pharaoh about his wife, Sarah, profiting handsomely as he traffics her and essentially serves as her pimp in Egypt. While most people think of David and Bathsheba’s relationship as a mutual affair, which would still be wrong, I think it was more like a power rape. We shouldn’t be shocked that the Bible tells stories of screwed up saints.

What made these four sinners righteous is what makes all of us sinners righteous—a humble declaration before God that we have done evil and need him to create a clean heart and to renew a right spirit within us.

RNS: Abraham wasn’t the only polygamist. Jacob and Solomon and many other people that Christians revere were too. There is no condemnation of polygamy in the Old Testament, and in some cases it is encouraged. What is the Old Testament’s position on polygamy?

DL: Scripture is clear from the beginning that God designed marriage to be between one man and one woman. But post-fall, non-ideal forms of marriage appear, and God worked within that system to help provide justice, particularly for the wives in situations where they might get exploited.

The example of Jacob might help here. We may think polygamy was primarily for the benefit of the husband. But Jacob was looking for just one wife: Rachel. It was everyone else who wanted to give him more wives. His father-in-law gave him Leah, because he wanted her to have security. Then Rachel and Leah offered Jacob their maidservants as his concubines to produce more children. Because of their non-ideal polygamous family structure, Jacob’s family was plagued with conflicts, and yet God was still able to work through it, to bring good for the nation of Israel, and ultimately, for the world. 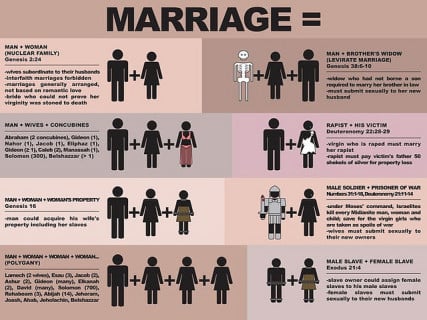 A chart describing the types of marriages presented in the Bible – Courtesy of G. Burkhardt via Flickr (http://bit.ly/25PoOwB)

RNS: Cain married his sister, and the Bible doesn’t come near condemning this. Actually, there was a good bit of this sort of thing happening. So what is the Bible’s position on incest exactly?

DL: We’re not really sure who Cain married, but we do know Abraham married his half-sister, Jacob married two sisters, Isaac married his cousin, Moses’ father married his aunt. I could keep going, but I’ll stop. Yes, there’s a lot of incest in the Bible. But we need not to assume that just because the Bible records a behavior, it approves of it. An absence of condemnation does not constitute an affirmation. Eventually, incest is severely condemned, and most of the biblical examples of incest occur before the laws were given that condemn it in Leviticus 18 and 20.

While incest may seem weird, something that only royal families have to worry about, tragically it occurs frequently today in contexts of sexual abuse. Many of the victims are children. Into incestuous contexts, both ancient and modern, God’s laws tell family members, mainly men, that members of your own family are off-limits, and the consequences will be severe.

RNS: Some have argued that the Bible–all of it–presents only one model of marriage, sex, and family: “one man and one woman for life.” With the numerous pictures actually present in the text, this seems to be reductionistic if not dishonest. What say you?

DL: In Prostitutes and Polygamists, I discuss the Bible’s many examples of sexual relationships beyond the “one man and one woman for life.” It also includes many examples of murder, but no one thinks these examples should be interpreted as exemplars. Just because the Bible records something doesn’t mean it’s endorsing it. It takes work to understand how these non-ideal examples are to be understood. While there is no explicit condemnation in the text, the gang rape of the Levite’s concubine in Judges 19 is clearly meant to be viewed as horrifically evil.

The laws that may seem to condone polygamy, don’t actually advocate for it, but merely legislate what to do when it happens. Polygamy was assumed. In ancient contexts of warfare, there could be far more women than men. Polygamy could provide security for some of the unmarried women. The Bible does have an ideal, and yet it still practically addressed the reality of a broken world.

If you ask people about Sodom, they’ll tell you it was destroyed by fire and brimstone for homosexual behavior since they wanted to gang rape Lot’s angelic visitors. However, readers of Prostitutes and Polygamists may be shocked to learn Sodom’s backstory. The biblical text never records the residents of Sodom performing homosexual acts, but it makes it clear they were guilty of injustice and inhospitality, and therefore deserved judgment. But beforehand, God was gracious toward Sodom—slow to anger, delivering them in battle, and warning the residents of the city to flee. Abraham even risked his life on two separate occasions for the residents of Sodom. Wouldn’t it be great if more Christians were like Abraham, risking their lives for people associated with the sins of Sodom?