WASHINGTON (RNS) Muslim leaders have joined with dozens of interfaith allies in calling on the Democratic and Republican national committees to formally commit to protecting religious minorities on the campaign trail.

Previous campaigns have targeted candidates, but Shoulder to Shoulder — a coalition of 32 religious denominations and organizations, including the Islamic Society of North America and the National Council of Churches — is aiming for the party heads.

“When we have people whose bigoted, hateful, Islamophobic, racist rhetoric challenges the very principles of American society, when they seek the highest office of the land, we stand sister to sister, brother to brother, shoulder to shoulder, and we say no,” said Rabbi Jonah Pesner of the Religious Action Center of Reform Judaism in a Washington press conference on Thursday (April 14).

In letters to RNC Chairman Reince Priebus and DNC Chairwoman Debbie Wasserman Schultz, the group called on them to explicitly and unambiguously commit to combating discrimination against Muslims and reinforcing religious freedom in their party platforms. 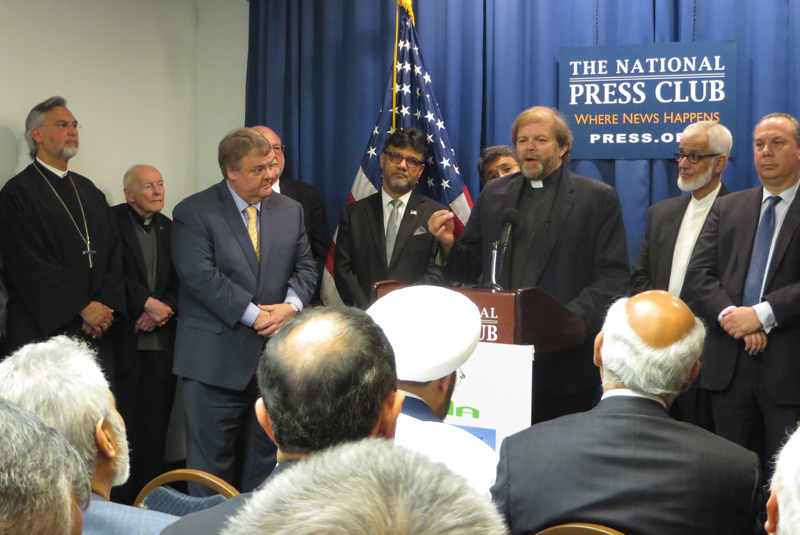 The Rev. Ron Stief, at mic, chair of the Shoulder to Shoulder campaign against Islamophobia, speaks during a press conference pushing national political parties to reject anti-Muslim bigotry in the elections at the National Press Club in Washington, D.C., on April 14, 2016. Religion News Service photo by Aysha Khan

“When candidates for the highest office in our nation suggest banning Muslims from the US, or registering Muslim citizens, or surveillance of mosques without warrant, we are compelled to lift our voices collectively to say that this exclusivist vision of America harms us all,” Stief told the party leaders in his letter.

Stief pointed to statements from former presidential candidate Jeb Bush and Speaker of the House Paul Ryan, both Republicans who have denounced anti-Muslim campaign rhetoric.

“I do not comment on what’s going on in the presidential election. I will take an exception today,” Ryan had told House Republicans after front-runner Donald Trump’s proposal to ban Muslim immigration. “What was proposed yesterday is not what this party stands for, and more importantly, it’s not what this country stands for.”

For people of faith, there is a moral obligation to push back against rhetoric that breaches both the Constitution and religious scripture, coalition members said.

“We are unwilling to sublimate our faith for political ideology,” said the Rev. Richard Cizik, president of the New Evangelical Partnership for the Common Good. “And on the campaign trail this year, it’s pretty obvious that both the rhetoric and the policy proposals are having an impact on Muslim Americans.”

In December, the FBI reported that hate crimes were falling in every category except those against Muslim Americans, which the Council on American-Islamic Relations says reached record highs after several major terrorist attacks. Experts say a wave of anti-Islam rhetoric in the election campaigns would only fan the flames.

The interfaith leaders emphasized the Muslim American community’s ongoing and vocal condemnations against terrorism. Muzammil Siddiqi, chairman of the Fiqh Council of North America, a leading Muslim jurist body, reissued the group’s 2005 fatwa against terrorism during the conference.

“None of us are going to stand still when (political candidates) attack any of us,” said Cardinal Theodore McCarrick, retired archbishop of Washington, at the press conference. “It is the worst politics that they can do.”