JERUSALEM (Reuters) – A Jerusalem brewery has produced a craft beer with a taste it says dates back to the time of Jesus. A sip of the concoction may help explain why wine was the preferred sacred drink of the Bible.

There’s a hint of honey and berries in the cloudy — and flat — nectar, which has a 3 percent alcohol content. The brewery made it from 5 kilos (11 pounds) of grain donated by the university, along with the other traditional ingredients hops, yeast and water.

Herzl’s owner Itai Gutman and his friends have downed most of the results of the six-month experiment. Only one bottle remains and there are no plans to make more.

“We were curious about being able to come up with the first ‘biblical’ beer,” said Gutman, whose award-winning brewery produces five contemporary labels for sale. “It’s really not the kind of flavour that has a market.”

Wine is the sacred beverage for both Judaism and Christianity, is frequently mentioned in their scriptures and figures to this day in their religious practice.

But beer likely would also have been familiar to Jesus and his disciples. It was brought over from Egypt by the ancient Israelites, according to the Jewish Museum in Munich, which is taking part in 500th anniversary celebrations of the Bavarian Beer Purity Law that regulated Germany’s brewing industry. 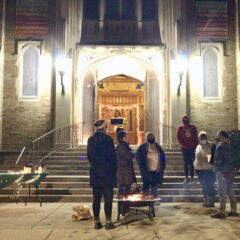