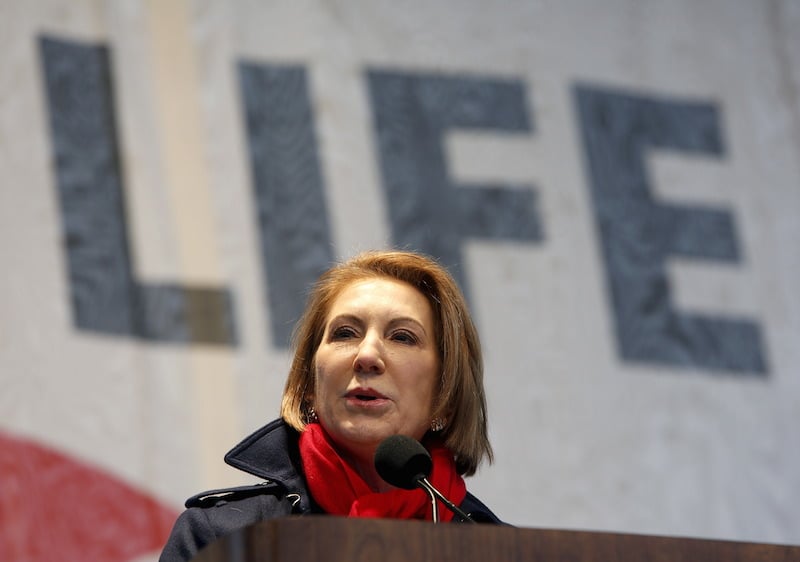 UPDATE: Sen. Ted Cruz announced April 27 that Carly Fiorina would be his running mate if he wins the GOP presidential nomination. She withdrew from the race in February.

(RNS) GOP presidential hopeful Carly Fiorina has been forthright about faith long before — and during — her campaign.

Indeed, after rival Ben Carson said a Muslim should not be president, Fiorina told Jimmy Fallon on The Tonight Show, “I think that’s wrong. I actually believe that people of faith make better leaders,”  according to NBC News.

At a Heritage Foundation event, Fiorina, 61, said when she was 8 years old her mother, who was also her Sunday school teacher, gave her a plaque that said: “What you are is God’s gift to you and what you make of yourself is your gift to God.”

During her undergraduate years at Stanford, she studied medieval history, reading Thomas Aquinas, Maimonides and other Christian, Jewish and Islamic philosophers. In recent years, The New York Times described her as an irregular churchgoer who is not affiliated with a particular denomination.

Fiorina is a global ambassador for Opportunity International, a Christian global anti-poverty microfinance organization that merged with her One Woman initiative in 2013.

She spoke to the Heritage Foundation about times she volunteered with agencies that serve special needs children. These are children, she said, that abortion-rights liberals, who protect “even flies,” would call “flawed” but she sees them as “full of grace.”

However, even with her strong abortion opposition, a New York Times profile notes, she would allow abortion for incest, rape and in cases where the mother’s life was in danger — but never with taxpayer funds.

She told Christian Broadcasting Network’s David Brody she supported Proposition 8 in California (which banned gay marriage in 2008 and was overturned by the U.S. Supreme Court in 2013).

During her unsuccessful 2010 campaign to unseat U.S. Sen. Barbara Boxer,  Fiorina said, “I do believe that marriage is between a man and a woman, but also have been consistent and clear that I support civil unions for gay and lesbian couples.

When asked to comment about Kentucky clerk Kim Davis, who went to jail for refusing to issue marriage licenses to same-sex couples, Fiorina broke with most of the GOP candidate pack. On Hugh Hewitt’s radio show, Fiorina urged Davis to follow the law or resign:

“While I disagree with this court’s decision, their actions are clear. And so I think in this particular case, this woman now needs to make a decision that’s [about] conscience,” said Fiorna. If Davis continues on the government payroll “she needs to execute the government’s will” or quit and find a job “where her religious liberties would be paramount…”

4. Fiorina turns to Jesus in difficult times, such as her treatment for breast cancer and the death of her daughter, who dealt with drug addiction.

According to The New York Times, she told Iowa’s Faith and Family Forum, “It was my husband Frank’s and my personal relationship with Jesus Christ that saved us from a desperate sadness.”

5. On the campaign trail…

She opposed the nuclear deal, urging President Obama to “stop talking to Iran. I will never defend anti-Semitism and it is alive and well” in Jordan and Saudi Arabia and other Middle Eastern countries, she told Colorado radio host Craig Silverman’s show. However, “It is Iran and only Iran fueling terrorists with the express goal of exterminating Israel.”

She was one of the main rally speakers at the 2016 March for Life in Washington DC in January, railing against abortion to a crowd of blizzard-braving activists. And attacking Planned Parenthood has been part of her campaign stump speech.

Also evident in every speech, is her sense of herself as someone who has been tried in bad times and sustained by faith.

“I’ve battled cancer, I’ve lost a child, I’ve been tested,” she says. “I think faith gives us humility, and empathy and optimism. And I think those are important things.”