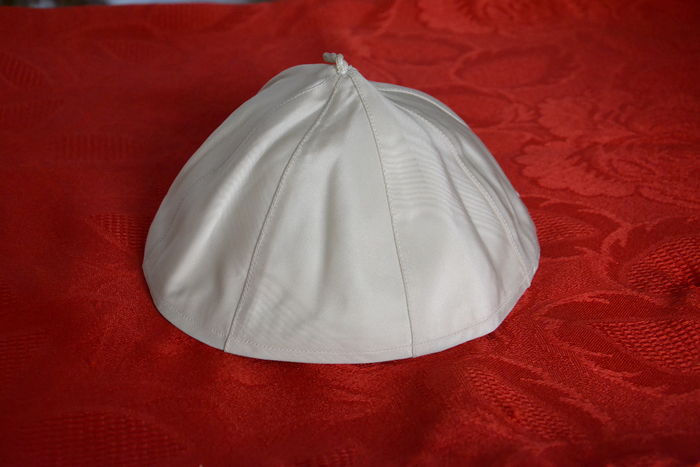 A skullcap worn by Pope Francis has been sold at auction for over $18,000.

VATICAN CITY (RNS) Pope Francis is a sharp critic of unfettered capitalism, but his brand is so popular that almost anything associated with him is a potent marketing opportunity.

The latest proof: a skullcap worn by Francis has been sold at auction for over $18,000. Not too shabby for an item that can cost less than $100 retail.

The silk papal skullcap, known as a zucchetto, sold on the auction site catawiki for 16,100 euros ($18,240) following a flurry of rival bids just before the bidding closed on Sunday (April 24).

The traditional white zucchetto was said to have been passed from Francis to “the host of an Italian TV show” during an audience in St. Peter’s Square in June 2014. Video of the exchange was used by catawiki to promote the sale.

The seller was named as Frederik Jamees, who usually lists slot machines for sale, with part of the proceeds donated to a charity called Save a Child’s Heart, a humanitarian group based in Israel that aids children in developing countries who suffer from heart disease. Pope Francis arrives at the weekly audience in Saint Peter's Square at the Vatican, on April 27, 2016. Photo courtesy of REUTERS/Alessandro Bianchi *Editors: This photo may only be republished with RNS-SKULLCAP-AUCTION, originally transmitted on April 27, 2016.

It is customary for the pope to exchange his white skullcap with one given to him by one of the faithful, meaning there are undoubtedly more than a few worn by Francis that are now in circulation outside the Vatican.

The skullcap listed by catawiki appears to be the same one that was listed on Italian eBay in September 2014, eventually reaching bids of 89,050 euros, or close to $100,000. Proceeds of that auction were to have been donated to the charity Soleterre Onlus, specifically for a project in the Democratic Republic of Congo.

Ownership of that skullcap was attributed to the satirical Italian TV show “La Lene,” which sent cast member Damiano Cavadi to the papal audience on June 4, 2014.

But a catawiki spokesperson said Wednesday that the eBay sale did not happen, though she had no further details.

Items attributed to the popular pontiff have in the past reached high prices, including two of the small Fiats he traveled in during his trip to the U.S. in September 2015.

One Fiat 500L sold for $82,000 at a charity auction in January organized by the Archdiocese of Philadelphia, one of Francis stops on his three-city tour.

An auction in March of another papal Fiat, this one set up by the Archdiocese of New York, netted $300,000 for Catholic charitable causes.