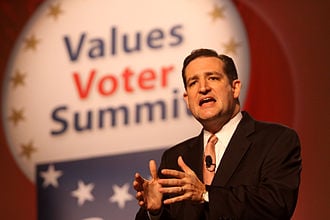 Ted Cruz ran as the candidate of social conservatism and he lost. Like Mike Huckabee in 2008 and Rick Santorum in 2012. So what else is new?

What else is new is that Huckabee and Santorum lost to the anointed candidate of the Republican establishment. Sure they won the Iowa caucuses and hunks of the South, but by springtime the rest of GOP Nation had pretty much fallen into line.

Cruz couldn’t even make his social conservative candidacy work the year the establishment fell apart. Except for his home state of Texas, he was shut out of the old Confederacy by a New Yorker who barely mentioned the social issues or religion.

In most of the primaries and caucuses Cruz won, it was because he was the most right-wing, not because he was the paladin of anti-abortionism, traditional marriage, and religious liberty. Inside the big tent of Southern evangelicalism, what the altar call of nativist nationalism that got them to hit the sawdust trail.

Iowa and Kansas — which went for Cruz as they had for Huckabee and Santorum — are the last bastions of what passes for the religious right today. Elsewhere, Republicans are moving on. When your best shot at a social wedge issue is transgender restrooms, you should realize it’s time to move on too. Ted Cruz, caught in a Beltway time warp, didn’t.