WASHINGTON (RNS) Long a celebration of evangelical influence in Washington and beyond, speakers at this year’s National Day of Prayer observance decried what they saw as America’s moral decline, in particular the acceptance of same-sex marriage.

And while not mentioning any particular candidate in this year’s election, Dallas pastor and broadcaster Tony Evans said conservative Christians should search their consciences and show that “we are not ashamed that we have cast our vote for the king of kings.”

He and other speakers on Capitol Hill Thursday (May 5) took particular aim at last year’s Supreme Court decision legalizing same-sex marriage, encouraging the faithful to actively promote their own views. 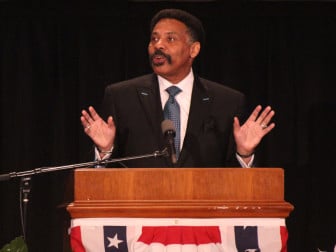 Dallas pastor and broadcaster Tony Evans gave the keynote speech at the National Day of Prayer observance on Capitol Hill on May 5, 2016. RNS photo by Adelle M. Banks

“Everybody else is coming out of the closet, we might as well come out too,” Evans said.

“Was it not shocking to the nation when on June 26, 2015, the very definition and meaning of marriage that has endured for 5,000 years in every civilization on Earth was redefined, weakened and undermined?” asked Shirley Dobson, outgoing chair of the National Day of Prayer Task Force.

Since 1952, following an act of Congress, the National Day of Prayer has been observed annually. The law was amended in 1988 for the observance to be held on the first Thursday in May. Although the task force describes it as “a day for people of all faiths to pray for the nation,” it is known most as a day embraced by evangelical Christians, who gather on capitol steps, in public parks and a range of other locations each year.

Church-state separationists and nonbelievers have long countered the tradition, objecting to government proclamations affirming a special day for prayer. Atheists, secularists and humanists have sought to have the same day each year also declared a National Day of Reason, but legislation for that additional observance has stalled on Capitol Hill.

The Freedom From Religion Foundation chose Thursday’s prayer day to file a suit against House Chaplain Patrick Conroy, alleging he barred one of its leaders from delivering an invocation before Congress.

President Obama, in a statement on the National Day of Prayer, acknowledged the range of approaches to prayer in America and the importance of religious liberty.

“Our country was founded on the idea of religious freedom, and we have long upheld the belief that how we pray and whether we pray are matters reserved for an individual’s own conscience,” he said. “On National Day of Prayer, we rededicate ourselves to extending this freedom to all people.”

For the most part, the Capitol Hill event focused on prayer rather than politics, but Rep. Louie Gohmert, R-Texas, citing a Proverb about wisdom, said of the three remaining presidential candidates: “Isn’t it wonderful that all three of them have such a wonderful fear of the Lord?” The remark drew some laughs from the crowd.

Evans, the Texas pastor, said the “chaos” facing the country is the result of a disregard for God. 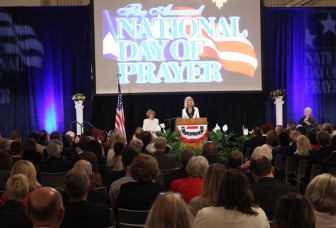 “What we are experiencing today is the passive wrath of God,” he said. “We want him for invocations, we want him in benedictions, as long he stays away from the meetings in between.”

During the Capitol Hill event, Dobson, wife of Focus on the Family founder James Dobson and 25-year leader of the prayer day’s task force, announced that Bible teacher and author Anne Graham Lotz, daughter of evangelist Billy Graham, will succeed her.