Responding to rumors of a potential breakup at the quadrennial United Methodist General Conference, Bishop Bruce Ough said Tuesday (May 17) that the leadership is “not advancing or advocating any plan of separation or reorganization of the denomination.”

The church faces increasing pressure in the United States to ordain LGBT clergy and allow same-sex weddings, both strongly opposed by conservatives in this country and among the growing congregations in Africa where homosexuality is banned in many countries.  There are 12 million Methodists worldwide, including 7.2 million in the U.S.

Ough, who is president of the Methodist Council of Bishops, acknowledged that its 152 members are divided. He cited a “brokenness” that “surrounds or emanates from matters of human sexuality, interpretation of Scripture, how we include our LGBT brothers and sisters.”

“At the same time, we remain open to new and innovative ways to be in unity. We will remain in dialogue with one another and others about how God may be leading us to explore new beginnings, new expressions, perhaps even new structures for our United Methodist mission and witness.” 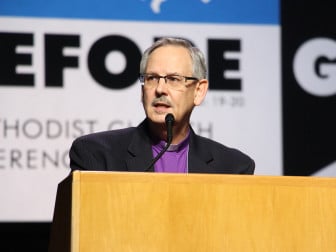 Bishop Bruce Ough, president of the Council of Bishops, responded to rumors on May 17, 2016, saying the bishops are only discussing “new structures,” during the United Methodist General Conference in Portland, Ore. Religion News Service photo by Emily Miller

The proposal reportedly would call a special session of the General Conference in 2018 in which “a plan of separation will be moved forward,” Love Your Neighbor Coalition coordinator Steve Clunn said in the video, recorded at a gathering that night for about 300 coalition volunteers.

In the meantime, the proposal envisioned a moratorium on any church action against LGBT clergy, he said.

Julia Frisbie, a coalition spokeswoman, says her group has been opposed to a schism in the church.

“We don’t think splintering the church will solve its problems,” she said.

Asked later at a press conference to respond to the rumored proposal, Ough confirmed that legislation had been put forward that would allow the congregations an exit strategy or authorize a commission to design a plan of separation.

Those ideas and many others were on the table during the bishops’ discussions, and they “captured everybody’s imagination” because they are “quite dramatic,” he said in response to a question from an RNS reporter.

But, he added, “We limited our conversations in the Council of Bishops to pretty high-level conceptual ideas.”

The coalition had not taken a stance on the plan and had been waiting for bishops to take leadership on it, Frisbie said.

Clunn said after Ough’s remarks, “I’m disappointed that the bishops obviously are suffering not just from divided opinions, but also from poor interpersonal communication.”

Delegates are considering more than 100 pieces of legislation regarding human sexuality this week at the General Conference.

The church’s Book of Discipline calls the practice of homosexuality “incompatible with Christian teaching.”

In its first week, delegates at the General Conference voted down a rule that would have allowed them to discuss contentious legislation in small groups, which some had hoped would change the tenor of conversations about LGBT inclusion. Protests also briefly halted Monday’s plenary session, and other actions leading up to the conference brought attention to the tension in the denomination, including letters from 111 clergy who came out as openly LGBT and 1,500 clergy who pledged support for their colleagues.