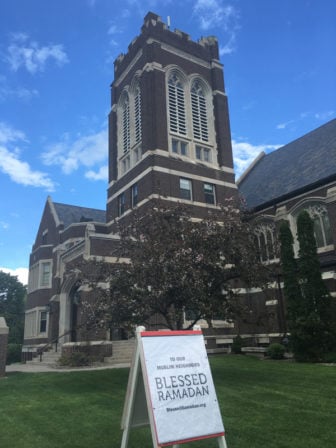 (RNS) The sign in front of the building reads “Blessed Ramadan.”

But the building isn’t a mosque or Islamic center — it’s Pilgrim Congregational Church, a United Church of Christ congregation in Duluth, Minn.

And Pilgrim isn’t the only Christian congregation in Minnesota wishing its Muslim neighbors well during Islam’s holy month, when believers fast from sunup to sundown.

The Blessed Ramadan campaign was organized by the Minnesota Council of Churches, which has 25 members representing a number of denominations and synods across the state, including the Church of God in Christ, the National Baptist Convention, the Evangelical Lutheran Church in America and the Greek Orthodox Archdiocese of America.

“In Minnesota, there has been a significant amount of Islamophobia, and yet that is not who we are in Minnesota. We are a welcoming, caring, respectful community,” said Jerad Morey, program and communications director for the council.

Jaylani Hussein, executive director of the Council on American-Islamic Relations in Minnesota, called it “a great initiative.”

“It’s a sign that deters bigotry and promotes tolerance in many ways,” Hussein said.

By the time Ramadan began Sunday evening (June 5), the Minnesota Council of Churches already had distributed close to 1,000 signs and ordered another 1,000, Morey said. Councils in other states, such as Kentucky, Ohio, New York and Washington, also have promoted the campaign, he added.

The Rev. Jennifer Amy-Dressler of Pilgrim said the Duluth congregation has been intentional in learning more about its Muslim neighbors.

On Friday, one member told Amy-Dressler about the signs, available for download or purchase on the Minnesota Council of Churches website, that read: “To our Muslim neighbors / Blessed Ramadan / blessedramadan.org.” By that evening, the church had printed a sign to place on its lawn and others for its congregants to take home and display in their windows, the pastor said.

It felt like an important gesture, given the growing Islamophobia across the country, she said. And earlier this year, the mayor of neighboring Superior, Wis., had stirred controversy after making a comment on a friend’s Facebook page referring to President Barack Obama as Muslim and saying he had “destroyed the fabric of democracy that was so very hard fought for.”

Obama has spoken openly about his Christian faith.

Because of incidents like that, Amy-Dressler said, “We wanted to make sure we were putting out a positive message.”

Hussein said CAIR-Minnesota has received reports of 30 to 40 incidents of Islamophobia in the last year and a half, noting “a new breed of cases that we are seeing.” The Minnesota Council of Churches also pointed to negativity against Muslims, “from neighborhood hate crimes to campaign rhetoric,” such as presumptive Republican presidential nominee Donald Trump’s call to ban Muslims from entering the United States.

In addition to creating the signs, the council is organizing Taking Heart interfaith iftar meals, when Muslims break the day’s Ramadan fast, for the 10th year with the Muslim American Society of Minnesota.