(RNS) Mounting accusations of sexual abuse against the archbishop of Guam have prompted Pope Francis to name a Vatican official to oversee the Catholic Church on the Pacific island territory while the charges are investigated.

The decision announced Monday (June 6) to force Archbishop Anthony Sablan Apuron, who has led the Agana Archdiocese for 30 years, to yield his authority, at least temporarily, is the latest sign that Francis is taking tougher steps to tackle the sexual abuse crisis.

Over the weekend, the Vatican announced that the pope had signed off on new measures to remove bishops who fail to respond to abuse allegations.

RELATED STORY: Francis lays down the law to bishops who cover up

In the case of Guam’s archbishop, however, the accusations are that Apuron himself abused boys during the 1970s.

The charges emerged last month when 52-year-old Roy Taitague Quintanilla claimed while he was an altar boy Apuron molested him. “I cried then, and I’ve never stopped crying,” Quintanilla was quoted as saying by Pacific Daily News.

His statement prompted a similar allegation by Doris Concepcion, who said her son was abused by Apuron as an altar boy in the 1970s. The alleged victim, Joseph A. Quinata, told his mother what had happened before he died 11 years ago, local media reported.

Deacon Steve Martinez, the archdiocese’s former sexual abuse response coordinator, said there were indications there could be more victims who have not yet come forward.

Martinez has accused Apuron of promoting weak policies to tackle abuse, in a bid to prevent thorough investigations.

“His effort of self-preservation has blinded his command to protect. … I’m sad to say that today, my worst dreams have come true,” Martinez said on June 1, according to The Guam Daily Post.

The Archdiocese of Agana issued a scathing rebuke of Martinez, accusing him of “malicious and intentionally false claims” as part of a “relentless” smear campaign against the archbishop.

Apuron has denied the allegations and the archdiocese hired a U.S. law firm to help defend him; Guam is a U.S. territory.

“(Martinez’s claim) is a calumny of such magnitude that the only avenue, which we are following, is recourse to the civil and canonical legal processes to address these intentional lies,” the archdiocese said in a sharply-worded response on June 3. 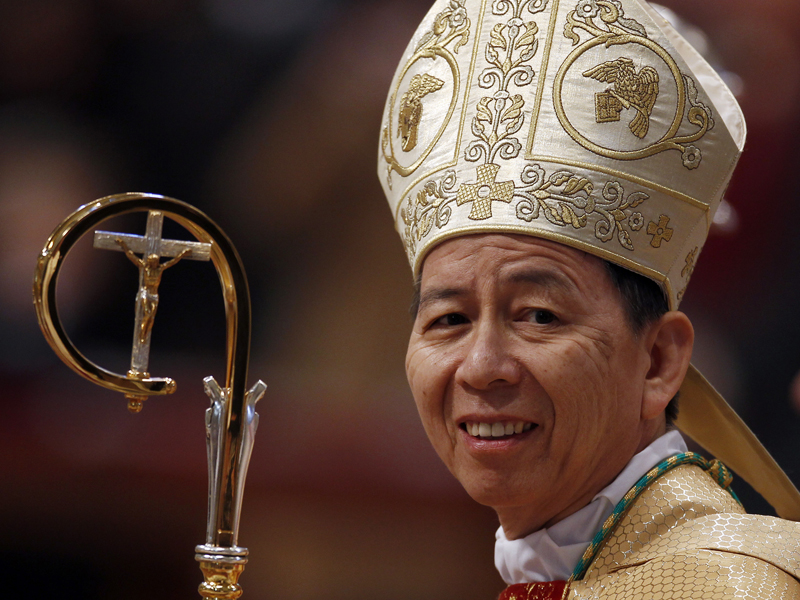 Chinese new bishop Savio Hon Tai-Fai attends a ceremony in which Pope Benedict XVI ordained five new bishops at the Vatican on February 5, 2011. Photo courtesy of REUTERS/Stefano Rellandini *Editors: This photo may only be republished with RNS-GUAM-ARCHBISHOP, originally transmitted on June 6, 2016.

The announcement that Hong Kong-born Archbishop Savio Hon Tai-Fai, currently second-in-command of the Vatican’s Congregation for the Evangelization of Peoples, would step in as apostolic administrator of Agana was the latest indication that Francis wants the church to take tougher action against the hierarchy.

Under the new decree published Saturday, the Vatican can investigate a bishop found guilty of serious negligence in tackling “acts that caused serious harm to others.”

The pope specified that such negligence includes failing to oust a suspected abuser; that has not been the case in the past, and that oversight has been one of the most contentious aspects of the church’s response to the crisis.

In such circumstances a bishop would still have the right to respond and the Vatican could subsequently remove him or ask him to resign.

In May, Francis said there should be a zero tolerance approach to pedophilia and asserted there was no statute of limitations in canon law when it came to tackling sexual abuse.

“As a result of these abuses, a priest, whose vocation is to lead a child to God, destroys him. He disseminates evil, resentment, distress,” the pope told the Catholic newspaper La Croix.