DHAKA (Reuters) A Hindu monastery worker was hacked to death on Friday (June 10) in what police suspected was fourth killing in a week by Islamists attacking minority groups in the majority-Muslim country.

Nitya Ranjan Pandey, 60, who had volunteered at the monastery for 40 years, was taking a walk in the northwestern district of Pabna when he was attacked, police said.

“He was found lying in a pool of blood,” district police chief Alamgir Kabir said, adding that no one saw the attackers as it took place early in the morning.

Hundreds of suspects have been held across the country after police launched a week-long crackdown on militants after a wave of gruesome killings.

This week alone, an elderly Hindu priest and a Christian shopkeeper were hacked to death, and the Muslim wife of a counter-terrorism police official was also killed.

Militants have killed more than 30 people in Bangladesh, including members of religious minorities, liberal bloggers and academics, since February last year.

Islamic State or al Qaeda have claimed responsibility for most of the killings, but the government denies either group has a presence in Bangladesh and says domestic militants are responsible.

Five suspected members of the outlawed Jamaat-ul-Mujahideen were killed in shootouts after the woman was stabbed and shot dead on Sunday.

Last month, police announced 1.8 million taka ($23,000) in rewards for information leading to the arrest of six militants of Ansarullah Bangla Team, another outlawed group they believe is behind the violence.

Analysts say a climate of intolerance in Bangladeshi politics has both motivated and provided cover for perpetrators of religious hate crimes.

The government blames the growing violence on its political opponents linked to Islamist parties, aiming to create chaos and prevent war crimes trials for incidents that date back to 1971 from going ahead.

The opposition party denies the accusations.

Hindus and Christians make up about 10 percent of Bangladesh’s 160 million population. 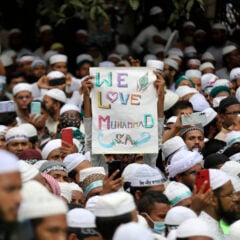 Religion Hub
Saudi Arabia puts 81 to death in its largest mass execution
Follow us on Facebook!
Submit your photos to RNS