(RNS) In the aftermath of the shooting at an Orlando, Fla., gay club, diverse leaders in the city have reached out to the LGBT community. One surprising photo emerged: evangelical megachurch pastor Joel Hunter shaking hands with Equality Florida’s Carlos Smith. It was a simple gesture, captured by a local newspaper reporter, but one with deep symbolic meaning.

“There is no place for hatred and violence in any healthy religion or in any healthy society,” Hunter said at a news conference called by the Florida branch of the Council on American-Islamic Relations. The senior pastor of the 20,000-member, nondenominational Northland Church shared more in a phone interview about the intersection of LGBT discrimination and religion in light of the shooting. The interview was edited for length and clarity.

Q: There’s a very noticeable difference in how religious leaders are saying the words “gay, lesbian, transgender, bisexual” in their responses to the shooting. Do you believe this was an act of hate targeted at a specific group?

A: Absolutely, it was. All of our hearts are broken and awakened. Many of us, especially in the conservative evangelical branch of the faith, don’t normally think of the vulnerability of many of the communities around us. It is not a part of our everyday agenda, but this has certainly put it on the agenda. This is something we need to specifically address on an ongoing basis to make sure that no population among us is threatened or marginalized. 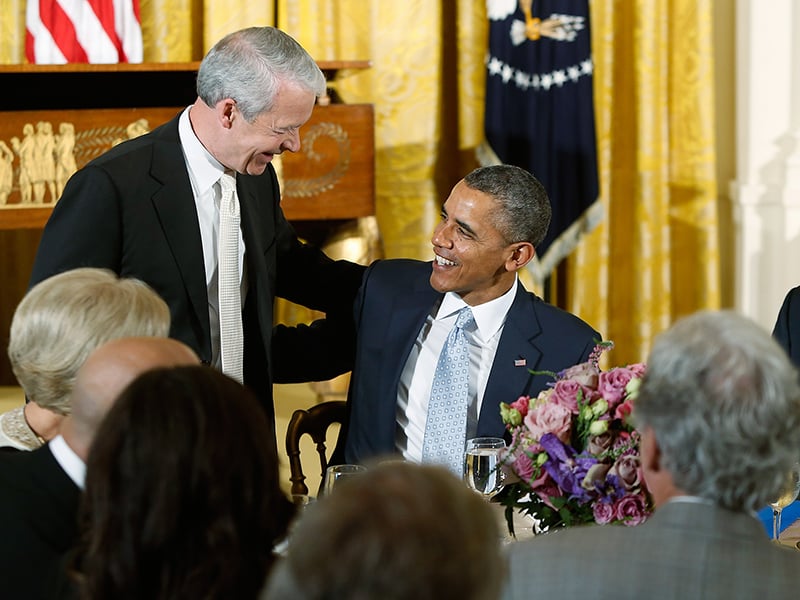 President Obama greets Joel Hunter, left, senior pastor of Northland Church in Longwood, Fla., after Hunter’s prayer during an Easter prayer breakfast in the East Room of the White House in Washington on April 14, 2014. Photo courtesy of REUTERS/Jonathan Ernst *Editors: This photo may only be republished with RNS-HUNTER-QANDA, originally transmitted on June 14, 2016.

Q: What message do you have, as a national religious leader, for LGBT people — especially young LGBT people?

A: There are a lot of us who want to make sure they are treated with respect — that they’re given every opportunity to live their full lives, that they’re as precious in the eyes of God as anyone who has ever been made. That would be the bottom line I want all people to understand, but specifically those who are going through this kind of struggle or this kind of cultural transition right now.

Q: Do you think the LGBT community in Orlando feels comfortable at your church and other conservative evangelical churches?

A: I hope so. We have several gay couples and gay people who go to our church, but we specifically don’t address a lot of sexual issues in the worship service. We talk about vulnerable populations, we talk about service, we talk about following Christ. I would hope they would be comfortable in a congregation like ours — but I don’t know. You’d have to ask them. We certainly want them to be.

Q: Do you believe there will be any reassessment or rethinking of positions on doctrine or theology in light of this tragedy?

A: We won’t in all likelihood change the way we interpret Scripture. We want to interpret Scripture as accurately as we can, not in light of current events or circumstances. For us, that’s a matter of hermeneutical integrity. We want to get our “what’s really there?” instead of put in what we’d like it to say.

Having said that, there’s much of Scripture that can come up to a greater visibility when it comes to treating people who don’t interpret Scripture like you do or who may not believe in Scripture at all. The worldview certainly can change. How we do Scripture probably will not change because that’s the best way to approach it.

Q: What complicity do American evangelicals have for a culture that relegates LGBT folks to a category of “other”?

A: Unfortunately, a lot. And I’m sorry to say that. I have to own up to my own part in that. When you’re in a position of power, as institutional forms of white Christianity have been for the last 200 years, you tend not to wish people ill but to avoid the necessary change, to maintain the status quo, because you have a pretty good position.

Thankfully, the next generation is not at all in that camp. People in my generation are pretty categorical in the way we think. So I’ve got to go back and examine my own heart, starting tonight in services, I’ve got to confess to my congregation that if there’s anything I’ve said that could have ever led to anything — the dismissal or denigration of any other population — God, I am so sorry for that.

But, having said that, the expression of the Christian faith, the one embodied in Jesus Christ, will certainly change from the institutional form that has relied upon just tradition and sometimes force — to a much more responsive and much more understanding expression. That’s the great hope.

(Guthrie Graves-Fitzsimmons is an RNS columnist)