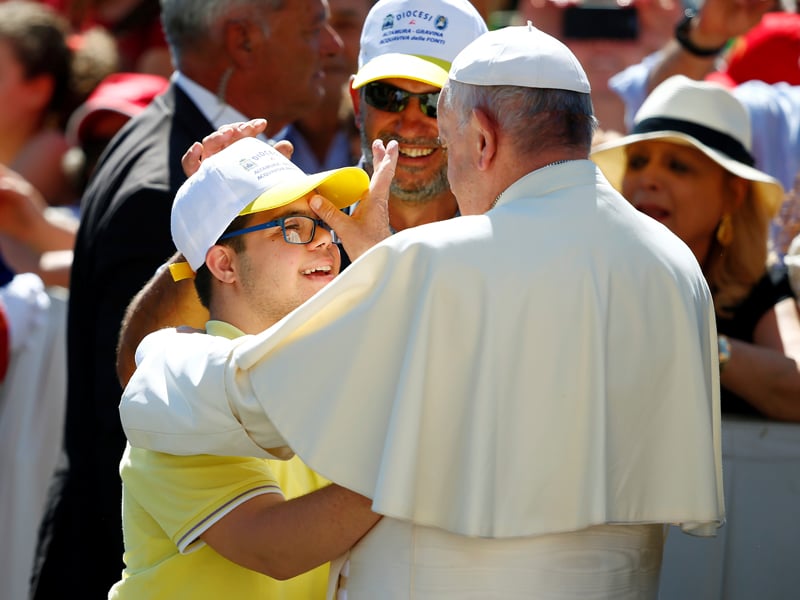 Pope Francis blesses a boy as he arrives to lead a special Jubilee audience in Saint Peter's square at the Vatican on June 18, 2016. Photo courtesy of REUTERS/Tony Gentile *Editors: This photo may only be republished with RNS-POPE-HYPOCRISY, originally transmitted on June 20, 2016.
June 20, 2016
David Gibson

VATICAN CITY (RNS) Stop being judgmental hypocrites and take a look at yourself in the mirror -- without covering up your wrinkles -- Pope Francis advised Catholics in a sermon that reprised one of his favorite themes.

In his last homily at morning Mass before taking a break for the summer, Francis on Monday (June 20) said those who constantly judge people should instead reflect on their own behavior.

"Look in the mirror, but not to put on makeup to hide the wrinkles. No, no, no, that's not the advice! Look in the mirror to look at yourself as you are,” the pope said, in a report by Vatican Radio.

Vatican Radio usually has a reporter present at the pontiff's daily morning Mass in the small chapel at the Vatican guest house where Francis lives. The pope will continue to celebrate Mass daily as usual, but without coverage of his remarks.

In this latest homily, the pope said those who are overly critical of others rather than looking at themselves are viewed as hypocrites by the Lord, and should not try and take God’s place:

"Being judgmental is very ugly. Judgment belongs only to God, to Him alone!”

The pontiff instead urged his followers to focus on love, understanding and mercy -- the latter being the theme of the Catholic Church’s current Holy Year jubilee.

His comments continue a central theme of his papacy, during which Francis has promoted a pastoral approach to Catholicism rather than the unforgiving imposition of canon law.

While such an approach has been widely praised, the pope has also been accused by traditionalists of trying to water down church doctrine.

Francis is famous -- and controversial, to some -- for once saying, in reply to a question on whether gay men could become priests, "Who am I to judge?"