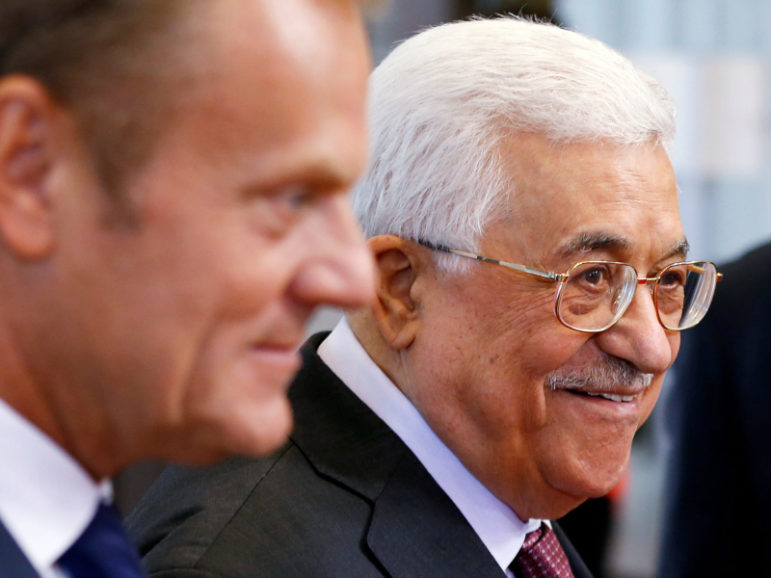 (RNS) During a speech applauded by the European Parliament, Palestinian Authority President Mahmoud Abbas made the unsubstantiated claim that rabbis had advised Israeli leaders to poison Palestinian water, a remark Jewish leaders worldwide likened to the persistent anti-Semitic myth of the blood libel.

“Just a week ago, a week, a group of rabbis in Israel announced, in a clear announcement, demanding their government, to poison, to poison, the water of the Palestinians,” Abbas said to the Parliament in Brussels Thursday (June 23).

“Is this not incitement? Is this not clear incitement, to the mass murder of the Palestinian people?” Abbas said.

Abbas made the remark after he called for the revival of a committee to investigate calls to incitement and violence among both Israelis and Palestinians.

But the accusation against Israeli rabbis was considered incitement itself by Jewish leaders.

"Unfortunately, conspiratorial incitement by the Palestinian Authority is not new," said Jonathan A. Greenblatt, CEO of the Anti-Defamation League, a U.S.-based Jewish civil rights group. "His charges of an Israeli effort to poison Palestinian water, and claims of Israel serving as the root of terrorism worldwide, are particularly disturbing and significant."

During the speech Abbas also said that if Israel were to leave land it has occupied since the 1967 war with neighboring states, terror would cease the world over.

“Once the occupation ends, terrorism will disappear, there will be no more terrorism in the Middle East, or anywhere else in the world,” Abbas said.

Abbas' remarks, which Israeli officials also derided as baseless and incendiary, recall the the canard of the blood libel, a centuries-old myth that Jews kill Christian children and use their blood to make matzo, the unleavened bread that Jews eat during Passover.

Jews historically have also been accused of other conspiracies to hurt non-Jews, including the poisoning of wells.

In territories controlled by Israel now, Palestinians are suffering a water shortage.

READ: The blood libel and the synagogue massacre

"It is unconscionable that a foreign leader proudly states a blood libel in the European Parliament and he receives a standing ovation,” Moshe Kantor, the president of the European Jewish Congress, said in a statement.

The Israeli government said Abbas repeated an anti-Semitic blood libel in his speech. No news organization that looked into the accusation was able to substantiate the claim.