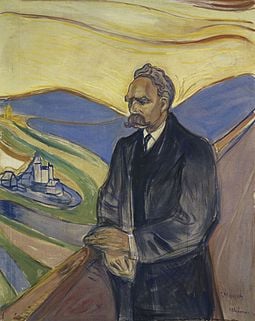 Portrait of Nietzsche by Edvard Munch (1906)

Donald Trump’s theology is more Friedrich Nietzsche than Jesus Christ, or so claims former Republican apparatchik Peter Wehner in today’s New York Times. According to Wehner, Trump’s exaltation of winners over losers, his open contempt for the least among us, is best understood by way of the Nietzschean Übermensch, not the Sermon on the Mount’s “Blessed are the meek.”

But as the Donald makes his run to inherit the earth, we do better to focus on the native American roots of Trumpology than to identify him with a caricature of the complex German thinker whom, Wehner admits, the real estate/Reality TV celebrity has in all likelihood never read.

The religious thinker Trump has read, whose sermons he listened to as a boy and who officiated at his first marriage, is Norman Vincent Peale. While Peale himself did not make a practice of sneering at the meek, his mid-20th-century gospel of positive thinking is the source of the theology that Trump manifests.

As I noted a few weeks ago, Peale drew heavily on the 19th-century tradition of Mind Cure that gave us Mary Baker Eddy and Christian Science, as well as the flood of spiritual self-help books that has never ceased. Against the image of a religion designed to succor those whom life had ground down, Peale also valorized worldly success in line with advertising man Bruce Barton’s 1925 best-seller The Man Nobody Knows, which portrayed Jesus as “the world’s greatest business executive.”

It thus should come as no surprise that Trump’s biggest backers in American Christianity are faith-based entrepreneurs like Jerry Falwell, Jr. and James Dobson, and personal empowerment preachers like Paula White. To dismiss their support of Trump as nothing more than a hypocritical desire to cozy up to the princes of this world misses an authentic dimension of their religious worldview.

But they do not represent American Christianity as a whole. Last week, a poll of 600 Iowa voters showed weekly worship attenders favoring Trump over Hillary Clinton by just 43 percent to 39 percent. In 2012, weekly attenders in Iowa voted for Mitt Romney over Barack Obama 63 percent to 37 percent.

If the God gap disappears in November, it will because a lot of American Christians, including a lot of conservative white ones, have stuck with the Sermon on the Mount, or at least the Golden Rule.