(RNS) As he has done 10 times in his seven-plus years in office, President Obama comforted the nation after a mass shooting with words of Scripture.

"My faith tells me these men did not die in vain," a wet-eyed Obama said from a podium to the right of full-color portraits of the five officers killed by a Dallas sniper Thursday (July 7). Then, paraphrasing the Psalms, he added:  "Pain comes at night. But joy comes in the morning."

The president spoke for 40 minutes, seemingly without notes, quoting from the Epistle of John and the prophet Ezekiel. His remarks sometimes took on the cadence and shape of a church sermon, with the definition of a problem -- America is divided by race -- and the promise of a solution. 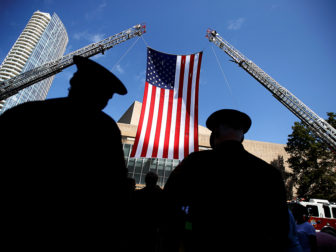 Police officers attend a memorial service after the multiple police shootings in Dallas, on July 12, 2016. Photo courtesy of REUTERS/Carlo Allegri

"This is the America I know," he repeated several times, almost like a refrain, to punctuate stories of blacks helping whites or policemen and women under fire coming to the aid of citizens.

The memorial service was held at the Morton H. Meyerson Symphony Center in Dallas. It was a private service for the families and police officers but was broadcast live.

Before the president's remarks, Dallas Police Chief David Brown told the crowd -- which gave him a standing ovation even before he was fully introduced by Dallas Mayor Mike Rawlings -- that the words of a Stevie Wonder song held his promise to the families.

"Your loss is unfair," he said. "We cannot explain it. But we can stand beside you. ... May God bless you."