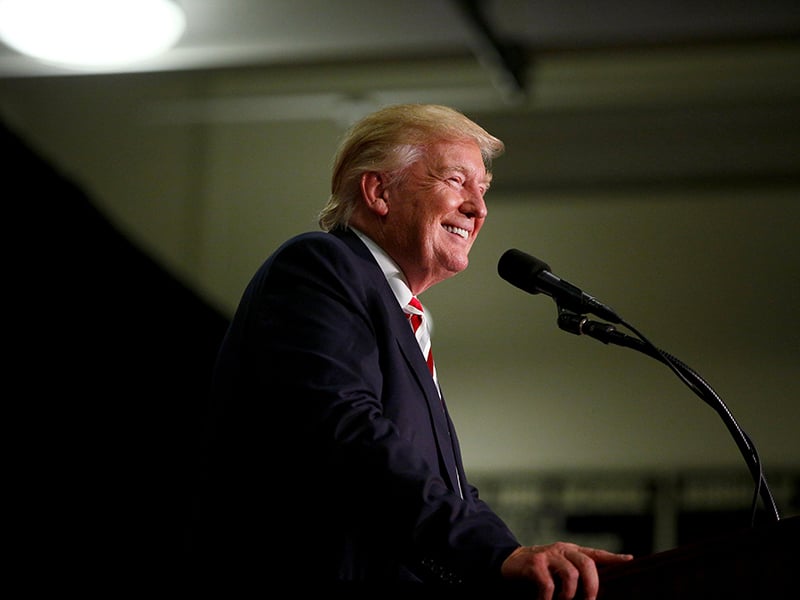 (RNS) The most important day of Donald Trump's campaign for the presidency was May 18, 2016.

On that day, the soon-to-be GOP nominee released the names of 11 judges he would consider nominating to the Supreme Court. The list was put together with input from the Heritage Foundation, a conservative think tank known for defending traditional marriage, opposing abortion and fighting for the right of religious institutions to follow their conscience on these matters (and others) without government interference.

By suggesting that he would appoint conservative justices, and actually naming their names, Trump made huge inroads among evangelical voters. This is because many of Trump’s evangelical supporters are still using the 40-year-old political playbook written by Jerry Falwell, Pat Robertson and other founders of the so-called Christian right.

There is not a lot of nuance or complexity in this playbook. In fact, its approach to presidential politics is quite simple: Vote for the candidate who opposes abortion and will appoint Supreme Court justices who will overturn Roe v. Wade, the 1973 case that lifted most government-based restrictions on the practice.

Though we have heard a lot of talk in the last decade about the Christian right’s steady decline as more younger evangelicals expand their Christian vision of politics to include the alleviation of poverty, the protection of the environment, the fight against slave trafficking and the pursuit of racial reconciliation, their parents still believe abortion, gay marriage, religious freedom and opposition to LGBT rights should be at the center of an evangelical political witness. And the fate of these issues rests on the Supreme Court.

This is why prominent evangelicals such as theologian Wayne Grudem, author Eric Metaxas, Liberty University President Jerry Falwell Jr. and Dallas megachurch pastor Robert Jeffress have told their followers that a vote for Trump is a moral vote.

These leaders are urging evangelicals to look beyond Trump’s character flaws and consider the larger ethical picture. If Hillary Clinton is elected, they argue, the Supreme Court will be lost for multiple generations. Roe v. Wade will not be overturned and Christian institutions will be persecuted for upholding traditional beliefs on marriage.

In a recent interview, Metaxas could not deny the fact that Trump has said some morally problematic things about women, immigrants, Muslims and the disabled, but he concluded that the New York real estate tycoon was essentially harmless, much like the crazy uncle at family gatherings who does not know when to keep his mouth shut. According to Metaxas, evangelicals should elect crazy Uncle Donald because he has a good heart and will appoint conservative justices.

So far Trump’s plan to woo evangelicals appears to be working. According to a recent survey by the Pew Research Center, Trump has gained serious ground among evangelicals, earning more support among them than Mitt Romney had four years ago at this point in the election season.

The Trump campaign is coming off a pretty bad week that included, among other things, disrespecting the family of an American military hero, failing to understand the relationship between Russia and Ukraine, using a campaign speech to build an argument against his opponent based on a video that did not exist and claiming that the 2016 election was “rigged” against him.

The only thing keeping him afloat in these troubled waters is his May 18 announcement about the Supreme Court.

But can evangelicals really trust Trump to deliver on his Supreme Court promises? According to the bipartisan website PolitiFact, 85 percent of the claims Trump has made on the campaign trail (or at least the statements PolitiFact checked) are either half true or false. (Compare that with Clinton, at 48 percent).

Of course many evangelicals will respond to such an assertion by claiming that at least they have a chance to change the court with Trump. Though he may be a wild card, evangelicals believe that Clinton would be much more predictable. A Clinton presidency would result in a crushing blow to the Christian right’s agenda -- perhaps even a knockout punch.

So this is where many evangelicals find themselves. They want the Supreme Court so badly they are willing to put their faith and trust in someone who is nearly incapable of telling the truth.

Let’s remember that choosing the lesser of two evils is still choosing evil.