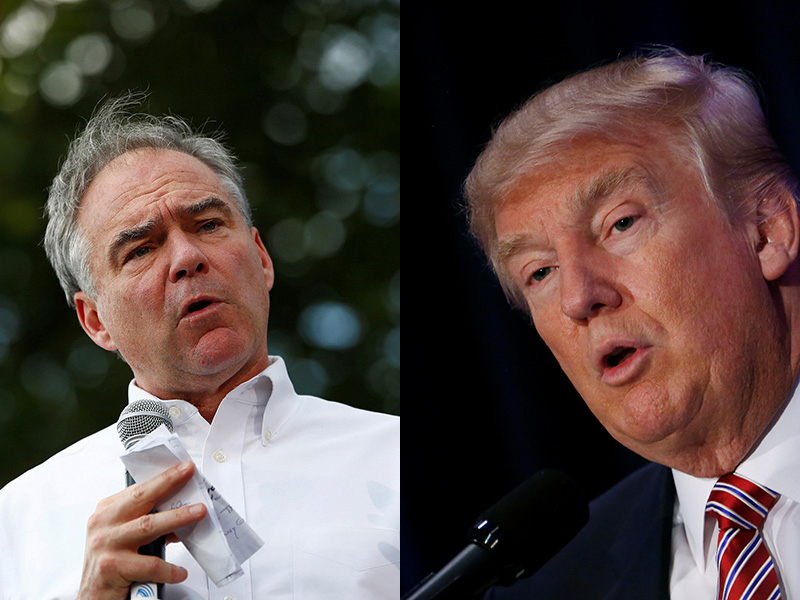 (RNS) Democratic vice presidential candidate Tim Kaine, recounting his work as a missionary and his role as a tenor in his Catholic church choir, cheered the efforts of a historically black Baptist denomination to get out the vote this election season.

“Voting is a sacred act, whether you are religious or not,” the Virginia senator told about a thousand people gathered at the annual meeting of the Progressive National Baptist Convention on Thursday (Aug. 11) in New Orleans.

The leaders of the denomination have encouraged its clergy and members to register people to vote each Sunday.

“Together with our congregations, pastors and community we’ve got to make sure that people don’t lose faith that they can make a difference and that their vote matters,” Kaine concluded.

In Orlando, Fla., Republican presidential nominee Donald Trump spoke to a gathering of pastors sponsored by the American Renewal Project, a conservative evangelical group founded by the anti-gay preacher David Lane, who ahead of the meeting warned that "homosexual totalitarianism is out of the closet, the militants are trying herd Christians there."

“If you could spread the word to everybody that you know, to all of the other pastors all over,” Trump said, “we will win.” He told them they are “spiritual homebuilders” and urged them to be involved in get-out-the-vote efforts, especially in “pivotal states” such as Virginia, Pennsylvania and Ohio.

In June, Trump told nearly 1,000 Christian conservatives in New York, “I’m so on your side.”

Republicans and Democrats have seen advantages in reaching out to the faithful ahead of November. Shortly before she became the Democratic presidential nominee, Hillary Clinton visited the quadrennial meeting of the African Methodist Episcopal Church in July in Philadelphia.

Though Kaine's speech in New Orleans focused on his record as a person of faith and a fighter for civil rights, the former Virginia governor made a point of differentiating himself from the Republican nominee for president.

“Religious liberty has served this nation well but we’ve got a candidate who says, basically, now we should start punishing people who are of the wrong religion,” he said, criticizing Trump without saying his name. “I don’t want to turn around on religious liberty after 240 years.”

PNBC President James C. Perkins, who introduced Kaine to the crowd as “the next vice president of the United States of America,” told RNS he attempted to reach Trump ahead of the meeting but did not succeed. The day before Kaine addressed PNBC members, interim Democratic National Committee Chair Donna Brazile spoke about the importance of organizing ahead of the November election.

In his remarks, Kaine spoke of how he, Clinton and their spouses stood offstage as the Democratic National Convention concluded with a benediction featuring the words “do all the good we can.”

“What a moment for us to be standing there, holding hands and hearing those words,” Kaine said. “This is Hillary Clinton’s creed and it’s mine too. It’s what I have done and, more importantly, it’s what I want to do.”

In a speech that lasted almost an hour, Kaine ticked off his religious resume: faithful parents who raised him in Kansas City, Mo.; attendance at a Jesuit high school whose motto was “men for others”; his leaving Harvard Law School “because of the still small voice that said, 'I don’t know what I want to do'”; and working as a missionary in Honduras.

“In Honduras, I found a spiritual energy, a spiritual refuge that has lasted throughout my life,” he said.

Kaine, who worked as a civil rights lawyer before becoming a politician, sprinkled his speech with the familiar language of the black church -- “It’s good to be in the service one more time.’’ He said “Total Praise,” the contemporary gospel song the choir sang as he entered the meeting, was the same song he asked his church choir to sing at his gubernatorial inaugural events: “You know how there’s no accidents in life.”

Kaine, a 32-year member of his Catholic church, noted “a long tradition in Virginia of visionary Baptists fighting for justice” and acknowledged the Rev. Jesse Jackson, a longtime civil rights leader, was in the audience.

Shortly after Kaine’s remarks, Jackson spoke to the gathering and listed statistics about the large numbers of unregistered African-American voters across the U.S.

“God has given us a rod,” Jackson said. “We have the power to turn red states blue.”