(RNS) After the long debate before gay marriage was made legal in 2015, a survey shows that since then Protestant pastors have rarely been asked to officiate them.

More than 100,000 same-sex weddings have occurred since the Supreme Court ruling. But only 11 percent of senior church pastors, both mainline and evangelical, report having been asked to perform such a rite, according to a poll by LifeWay Research.

Mainline Protestant clergy were three times as likely as evangelical pastors to have been asked. Presbyterian or Reformed clergy are most likely — 26 percent — to have received a request to marry a same-sex couple, while Baptist pastors, at 1 percent, are the least likely. 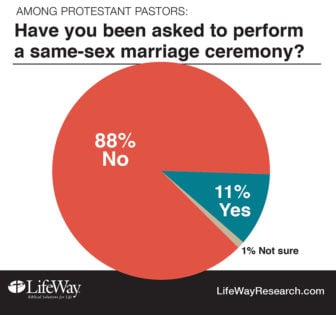 “Have you been asked to perform a same-sex marriage ceremony?” Graphic courtesy of LifeWay Research

Pastors 55 and older were twice as likely as their younger counterparts to be asked to perform a same-sex ceremony.

“Most couples, if they want a church wedding, will ask a pastor they know or who they think will support them,” said Scott McConnell, executive director of LifeWay Research. “For same-sex couples, this appears to be an older Presbyterian pastor.”

Researchers for the Nashville, Tenn., evangelical research firm also found that fewer than half of Protestant senior pastors say their churches permit LGBT people to serve, even in limited ways.

Despite the stereotypes of evangelicals being anti-gay, researchers found that fewer than half of evangelical pastors actually forbid LGBT people from serving in their churches. And mainline pastors, often viewed as LGBT-affirming, were split on whether LGBT people can serve. “Where can an LGBT person serve in your church?” Graphic courtesy of LifeWay Research

The findings, based on a phone survey of 1,000 Protestant pastors from March 9-24, 2016, had an overall margin of error of plus or minus 3.2 percentage points.

Opinion
Now’s the time to hew to your faith — by doubting your faith
Follow us on Facebook!
Submit your photos to RNS